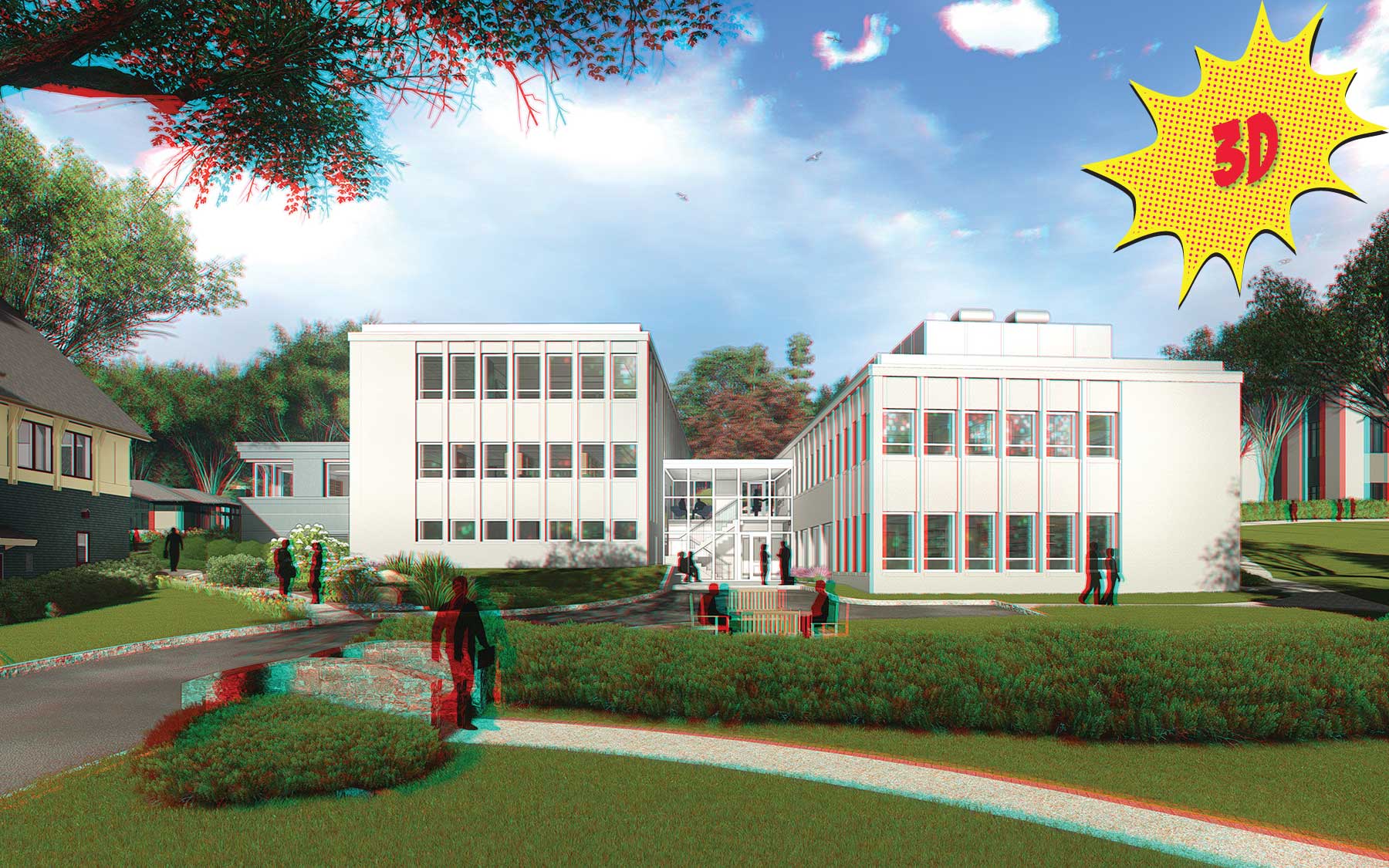 3D images are a throwback to the past as CSHL and Centerbrook Architects rediscover a 1950s building that has been occupied by some of the Laboratory’s most notable scientists.

As advancements in 3D visualization push the boundaries of virtual and augmented realities, you can imagine our surprise at Centerbrook Architects when longtime client Cold Spring Harbor Laboratory asked if we could create a “retro” rendering for use with 3D glasses to feature in the Summer 2017 issue of the Harbor Transcript. This rendering style looks to the past as CSHL and our design team rediscover a 1950s building that has been occupied by some of the Laboratory’s most notable scientists—including Nobel laureates Alfred Hershey, Barbara McClintock, Richard Roberts, and Carol Greider—and transform it into a modern research facility.

Anaglyph images, the kind intended for viewing with 3D glasses, were first used in the late 1800s and came to prominence in U.S. cinema in the 1920s. Mainstream use in newspapers, magazines, and comic books flourished into the 1950s and ‘60s, engraining the iconic red-and-blue-lensed glasses into the cultural zeitgeist. At that same time, future Nobel laureates McClintock and Hershey were conducting their research within the newly constructed Demerec Laboratory building. Completed in 1953 during the Brutalist architecture movement, the building is brought to life in the anaglyph image which highlights the strong repetitive vertical window patterning that defined a new era of architecture in the 1950s-70s.

Click the play button to hear about the Nobel Prize-winning work that Alfred Hershey conducted along with Martha Chase at CSHL, on our Base Pairs podcast.

The biannual Harbor Transcript publication highlights current research and news across campus about scientists at the forefront of their fields. In the most recent issue, CSHL saw an opportunity to create a more dynamic and immersive experience accessible to all recipients. The unique “3D Science” issue available here features anaglyph imagery from current cancer research as well as a rendering of the proposed renovations and addition to the Demerec Laboratory building that our firm is involved in. Construction is slated to begin this summer on a renovation and expansion to house the new Center for Therapeutics Research, a new $75 million initiative that aims to apply the Laboratory’s biomedical expertise toward advancing therapeutics for genetic diseases.

In our office, research and testing is ongoing to study how advancements in virtual and augmented reality can benefit our design process. These burgeoning technologies allow an immersive experience for clients to gain an understanding of the volume and form of a building design that cannot be achieved with traditional renderings and animations. With all of their promise, these technologies currently fall short in their feasibility for mass distribution due to the necessity of headsets, apps, or tethering to computers.

In contrast, anaglyph images pair perfectly with print media because the iconic red and blue glasses can be easily inserted into a publication. This realization of the simplicity of what is now a “retro” technology is a perfect metaphor for the Demerec Laboratory renovations that seek to bring back the simplicity and beauty of a building from the same era. Creation of this image was a reminder that with ever-evolving technology, the best means to convey a project to a large audience isn’t always the most advanced.