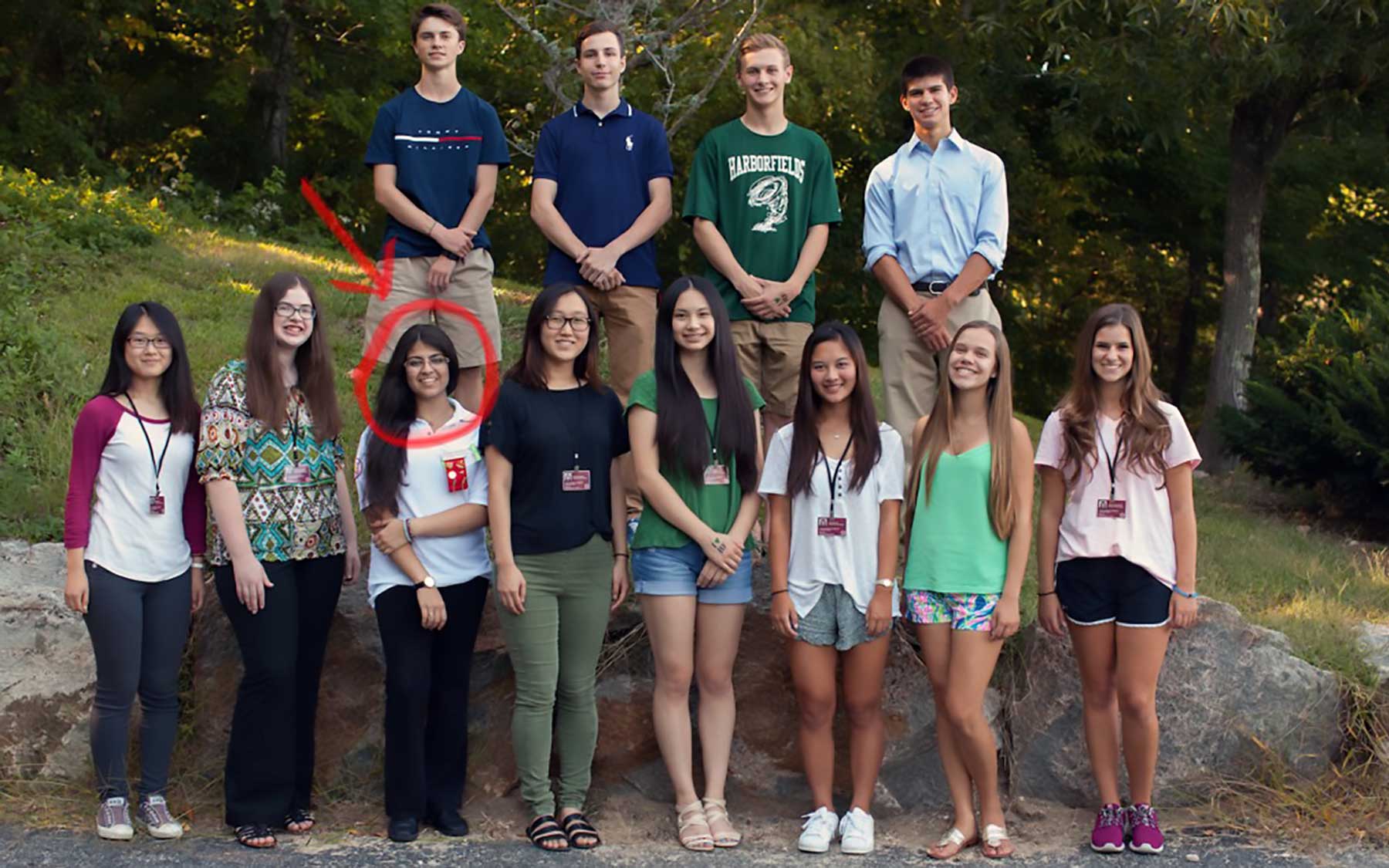 The young scientists in CSHL’s Partners for the Future Program have a real impact—not only by conducting research in the lab, but also by inspiring the people they meet.

When 18-year-old Tamanna Bhatia came to the Human Resources office at CSHL to hand in some paperwork, she mentioned she had some time to kill before her ride arrived. Wanting to give her a warm welcome, I showed her where the Blackford Bar was and cracked a lame joke about how she couldn’t order an alcoholic drink.

Tamanna is sweet—she let me bring her to the campus bar and thanked me for showing her around—but I realized on the way back that she probably didn’t need me to show her much of anything. She was comfortable at the Lab. She already felt that she was a part of it.

For about a year now, I’ve had the job of coordinating a CSHL program called Partners for the Future that brings super smart and science-interested high schoolers such as Tamanna into real-life laboratory work experiences. I came into this position not really knowing what to expect from these high-schoolers, other than intelligence. But it’s their enthusiasm and ability to beautifully convey their interest in and connection to the world of science that really blew me away.

As a facilitator of the nomination and interview process for this program, I have read essays written by the student applicants and the accompanying recommendation letters from their science teachers. Clearly, these students weren’t looking to be part of a working laboratory just to fill empty time in their schedules. They all had impressive lists of difficult classes, lots of extracurricular activities and pending college applications to keep them busy. Yet, there was something special in each student that made them want to experience what it means to be a lab researcher. I wanted to explore this special something and sat down with one of the “partners”—Cold Spring Harbor High School senior Tamanna Bhatia.

What sparked your interest in scientific research?

It’s kind of a weird story. I was born anemic, so when I was one and a half, I needed a blood transfusion. So ever since then, to kind of give back to people who helped me, my dad has been donating platelets to blood banks. When he heard about these different registries for stem cells and bone marrow, he decided, “Why not save a life?” So first, he donated bone marrow. He was almost an immediate match. Two months later, they found a three-year-old girl who had leukemia. His bone marrow really helped her out. And then, a couple years later, he was able to help the same girl with stem cells. So now she is cancer-free.

The laboratory I’m working in at CSHL has an emphasis on finding out about how cancer progresses and how specific proteins like CHD5 can actually stop cancer cells from growing.”

Because my dad could do something big like that, I want to do something big like that. A lot of interest for what I’m doing at the Lab sparked from my grandfather, who recently passed away from cancer. The laboratory I’m working in at CSHL has an emphasis on finding out about how cancer progresses and how specific proteins like CHD5 can actually stop cancer cells from growing.

Do you feel like a scientist doing real research in Dr. Alea Mills lab at CSHL?

It’s a really cool experience that I can actually use the technology. I’m not treated like an intern who can only be in certain places and do small stuff. I’m treated like a full-on scientist. I use the computers. I use pipettes. I have to wear gloves.

Right now, I’m trying to figure out the types of CHD5, proteins that protect from cancer, that exist in the body. I’m also trying to see which if these proteins are most abundant in different tissues. So, I am using a whole bunch of methods to extract DNA from different tissues. We’re using a technology called PCR, which I’d never heard of before. With this approach I can make versions of CHD5 that have the specific part of the DNA that I’m interested in. With PCR, I can replicate a single molecule of DNA many times so that it is easier to see. Once we find out version of CHD5 is most abundant in the body, we can then target that version to see if it has any effect on cancer.

How have you tackled any adversity you’ve felt as a young woman in STEM in the U.S. and India?

Growing up in an Indian family that always emphasizes education, I knew that I wanted to be a doctor, or an engineer, or a lawyer—something powerful or big. But, I noticed a difference between what women and men study when you look in India, and even still here. The ratio of men to women in engineering schools is around 75 percent male and 25 percent female. And it’s tough for females. I’ve heard professors say, “This is a male-dominated profession,” and, “Good luck girls, getting jobs.” That’s not right to say. I’m a feminist, so I believe that women have the same exact power, the same exact goals, so why not get the same treatment?

Basically, I’ve always been a supporter of women’s rights. I’m lucky I have parents who support me. They expect so much of me. It’s never a question of, “Oh you’re a girl?” It’s more like, “No, you’re our girl.”

In your limited time between school and the lab, what do you like to do?

Every Friday I volunteer at the Huntington Hospital, where I am the president of the junior counsel of the Junior Volunteer Program. I’m in charge of all the volunteers on my day, which is really, really cool. Mainly, I discharge people from the hospital, which is really nice because I make them happy by letting them leave the hospital. I do a lot of teddy bear deliveries and flower deliveries, which is especially cute in maternity. That’s my favorite.

We make sandwiches and hot meals for homeless individuals across Long Island. I’ve perfected the peanut butter and jelly sandwich.”

I also volunteer at the Huntington Jewish Center. We make sandwiches and hot meals for homeless individuals across Long Island. I’ve perfected the peanut butter and jelly sandwich.

Do you plan to continue to do research after you complete the Partners for the Future program?

I am applying to college as a biomedical engineer, so hopefully with that I can pursue medicine or I can continue in research.