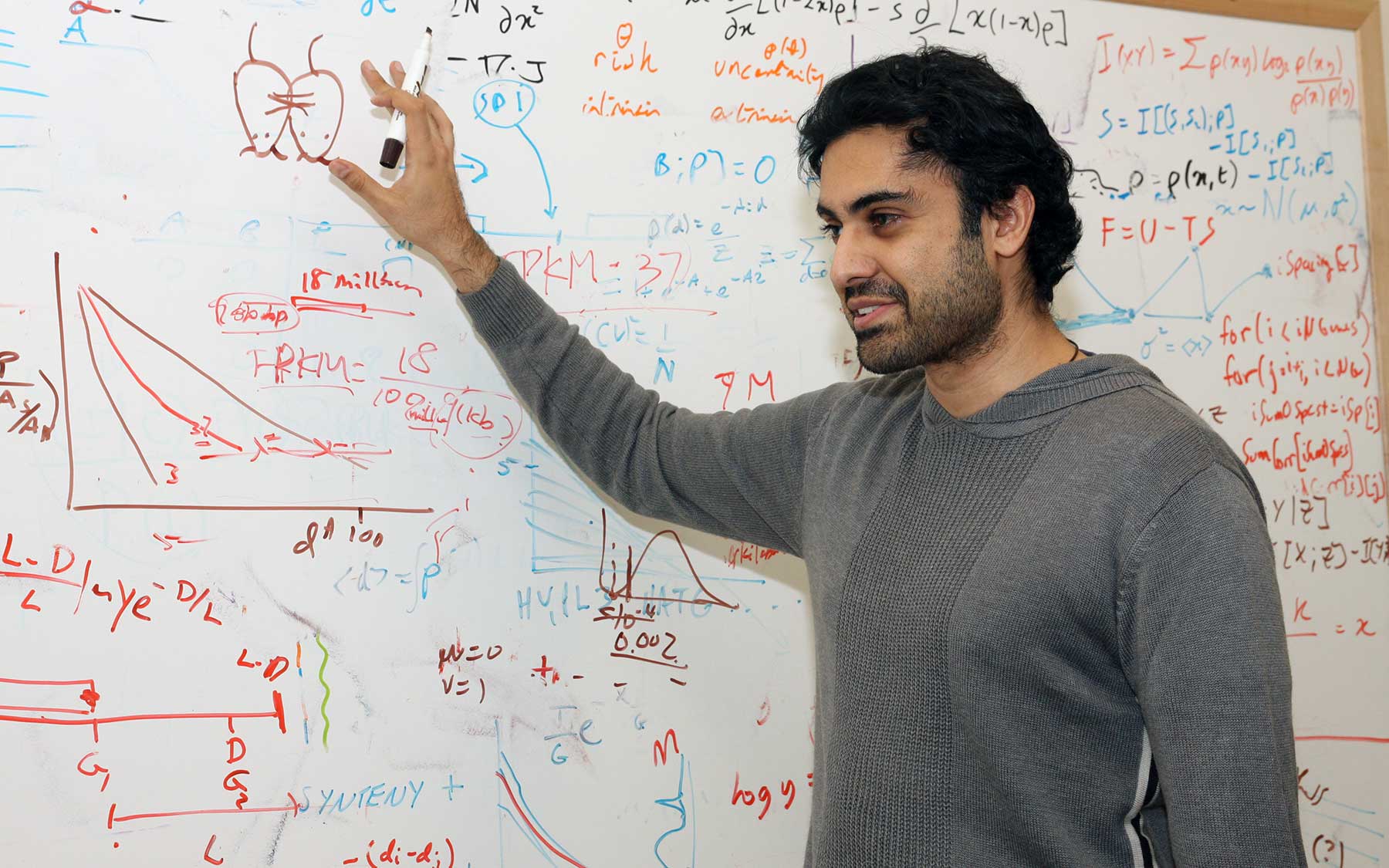 Math isn’t exactly known as “everyone’s favorite subject,” yet Associate Professor Mickey Atwal has won the Watson School of Biological Science’s teaching award by popular vote for the third time this year. How does he make the math in his quantitative biology course come to life?

It’s not uncommon to feel some sort of trauma associated with math class. Teachers usually try to avoid this outcome, but for Associate Professor Mickey Atwal, it’s part of the strategy—one that’s made him the most popular teacher in the history of CSHL’s Watson School of Biological Sciences. Last month, at graduation, he accepted the school’s Winship Herr Award for Excellence and Creativity in Teaching for the third time. Atwal jokes that in his class on the math-heavy subject of quantitative biology, “I create this virtual trauma. Like, everything they thought they knew is actually wrong.”

He’s referring to people’s tendency to misinterpret statistics, which he sees as fundamental not only to his class, but to many aspects of life for scientists and non-scientists alike. Over-the-counter drug and pregnancy tests are a clear demonstration, often advertising “99% accuracy” in bold, colorful, reassuring letters. “I go through that very example where I show if something’s 99% accurate and the result comes up positive, the answer could be 50-50,” Atwal says. “And that blows people’s minds.”

If you’re not emotionally invested in understanding why this is important, then why would you switch on?”

Quantitative biologists use math, including a lot of statistics, to analyze biological data and create models that can guide future questions and experiments. Now that biology has entered the age of big data, technologies such as genome sequencers are generating “too much data for us to look at by eye,” says Atwal.

Helping to satisfy the need for more quantitative biologists is part of his goal as a teacher, but Atwal knows many of his students will choose other scientific specialties. He uses examples like the 99%-accurate drugstore test to demonstrate the value of quantitative biology skills such as an understanding of statistics. If a positive result such as cocaine detection were so rare that it occurred, say, less than 1 in 5000 times, a non-user would actually be more likely than a cocaine user to get a positive result—a false positive.  That’s because the error rate in the test, 1 in 100, is far more common than the rate of cocaine use.

Atwal insists that the field is “not just crunching numbers,” preferring instead to think about quantitative biology in terms of the fascinating parallels between the way scientists interpret data and the way living creatures interpret data. If you’re not too traumatized to reach back into your math class memories, you’ll remember learning how to fit a line to a bunch of points on a graph, making the data easier to interpret. The brain does something similar, for example, when you look at a tree. You don’t see all of the individual specks of light that are going through your eyeballs, you see a tree.

Atwal wrote this post for LabDish: A theoretical physicist’s approach to breast cancer

No matter who you are, Atwal will go out of his way to find an example of how the mathematical equations he scribbles on the whiteboard can help you. “Forget about biology, I think statistics is really helpful as a human being,” he says excitedly. That attitude is critical when most of the highly driven students in your class are unlikely to make the subject of your class, quantitative biology, the focus of their future work. “If you’re not emotionally invested in understanding why this is important,” Atwal asks, “then why would you switch on?”

Brianna Bibel was one of those students in Atwal’s class who knew that she was unlikely to become a quantitative biologist (she’ll be joining Professor Leemor Joshua-Tor’s structural biology lab soon). At the end of their first year, graduate students such as Bibel vote on who should receive the school’s teaching award. She remembers that during a lesson on information theory, Atwal “told it as kind of a history,” introducing scientists as characters that made the math come to life.

Atwal’s dedication to alleviating what he describes as the “public allergy” toward mathematics never seems to wane, even when his own health presents obstacles. Bibel notes that when Atwal came in on crutches after a foot injury in the fall, “it didn’t even keep him from going up to the whiteboard.”