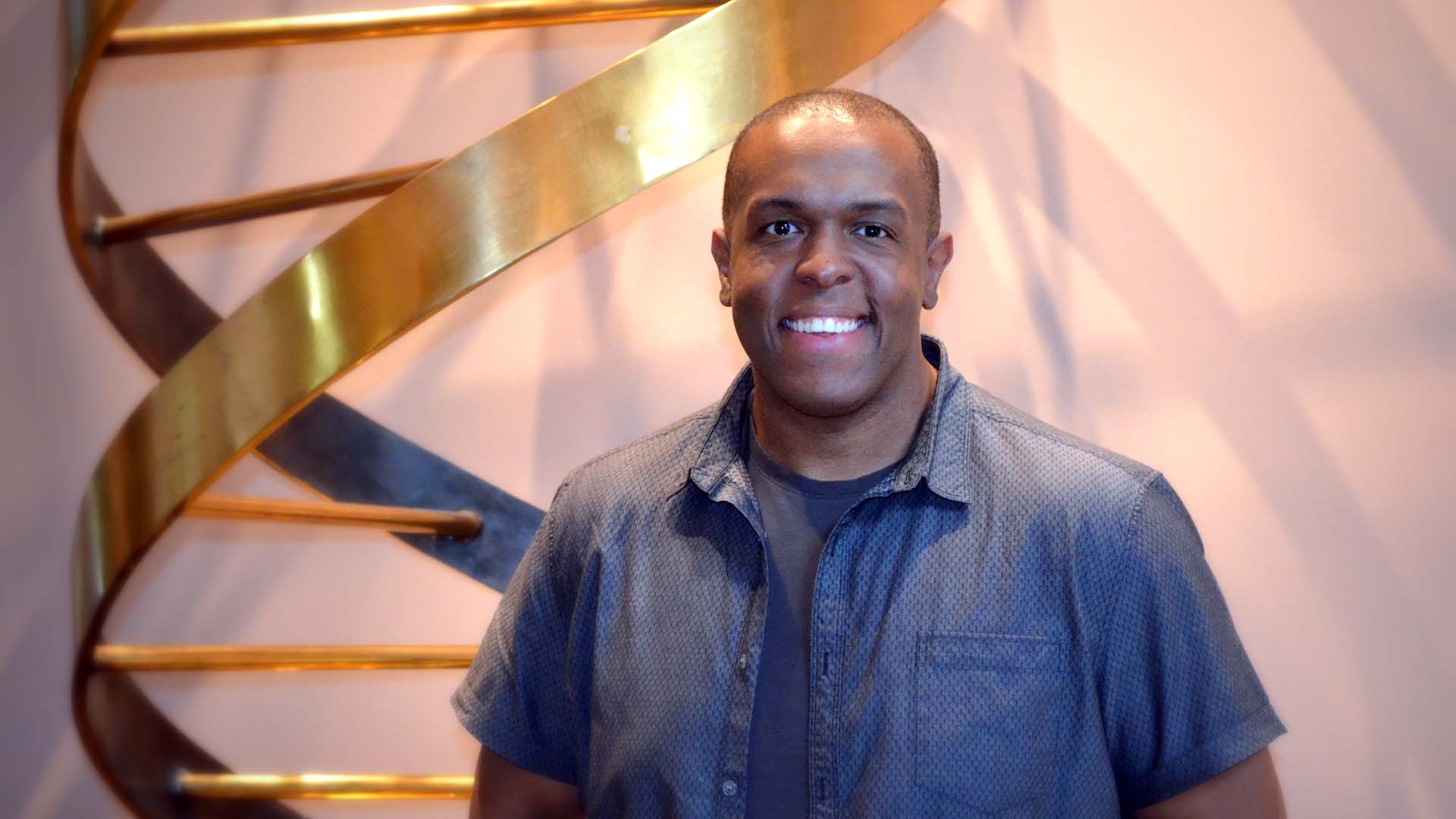 He is now a leader at the DNA Learning Center, the place that taught him to love biology in high school.

Jason Williams started out on the other side of the lab bench. While attending Half Hollow Hills High School, Williams was a student at the Cold Spring Harbor Laboratory (CSHL) DNA Learning Center (DNALC), where he engaged his interest in hands-on biology.

Williams jokes that his interest in science was not necessarily “every parent’s dream” because he kept live mice in his room. He wanted to test whether natural or artificial light affected the way they grew and how many offspring they had.

Biology represented a source of inspiration and information to the budding mouse researcher. Williams especially enjoyed a high school biology class in which his teacher skipped the labs to focus on general concepts of biology. One such lesson involved an idea the teacher dubbed the “flashlight effect,” in which an object closer to the flashlight casts a larger shadow.

The closer Williams got to science, the larger his shadow was destined to be. He attended Stony Brook University, where he majored in biology and worked in labs in the Ecology and Evolution Department studying plant phylogenetics and systematics.

After he graduated from college, he conducted research at Cold Spring Harbor Laboratory, first working on the molecular genetics of plant development in Arabidopsis and then moving to Professor Lloyd Trotman’s lab to study prostate cancer.

Williams leads at the DNALC

CyVerse and other Collaborations

The DNALC celebrates numerous collaborations that aid scientists and scientists-in-training. One of the largest and longest-standing collaborations is with CyVerse, which trains researchers in bioinformatics. Williams is the Training Lead at CyVerse. Offering computational infrastructure to help researchers with large datasets and difficult analysis, CyVerse provides a way to make discoveries about patterns or needle-in-the-haystack findings in vast pools of information. CyVerse’s warehouse of tools includes data storage, bioinformatics, image analysis, and cloud services. The DNALC and CyVerse provide critical expertise to scientists who need data storage and a confidence boost to develop and use data-driven tools to optimize their findings.

After doing bench research for four years, Williams returned to his first scientific home, DNALC, as an educator. As the Assistant Director for External Collaborations, he specializes in teaching bioinformatics and data-driven science to a variety of learners.

Providing educators with materials to improve their performance and provide the spark for future scientists has become his mission. “The dream that I see for the Learning Center is to cover all aspects of what a full and rich 21st century career means,” Williams said. “Biology is a data science. If we’re getting those tools into the hands of students, we’re opening up what’s possible.”

Williams is particularly pleased when he can take some of the mystery and fear out of computer coding. After working with a postdoc who told him he’s no longer afraid to code, Williams shared his “feeling of empowerment, which is what we want for every learner.”

In his education and outreach, Williams believes teachers who want to connect with students should take an improvisation course at the local comedy club or the equivalent because teaching is “performance art.” When effective, teachers can cut through jargon and capture the imagination of learners.

For over a decade, Williams taught, and still teaches, weekly science classes at the Yeshiva University High School for Girls in Queens, where he works with eight to 10 students at a time.

The dream that I see for the Learning Center is to cover all aspects of what a full and rich 21st century career means. Biology is a data science. If we’re getting those tools into the hands of students, we’re opening up what’s possible.”

Although Williams says his Mandarin is “terrible,” he uses the language skills he acquired in high school to build the DNALC’s programs in China. He connects with students who feel more comfortable receiving lab instruction in their native language. “We have had a wonderful relationship with China for a number of years,” Williams said. “We have an exchange program with Beijing.” Williams worked with three high school groups in Beijing and taught molecular biology.

He became a 2020 Kavli Frontiers of Science Fellow. The National Academy of Sciences chose young scientists from industry, academia, and government to participate in a Kavli Frontiers of Science symposium at the National Academy of Sciences. During these three day events, scientists who are 45 and younger participate in a range of research. The symposium enables future leaders in science to share ideas across disciplines and build contacts and networks. Organizers postponed the 2020 gathering in response to the coronavirus pandemic.

Williams earned the Meritorious Prize in the National Science Foundation’s 2026 Idea Machine Competition. His proposal was one of the top seven finalists among 800 submissions. Williams highlighted how scientific mentors, so well-versed in their own fields, can fail students by lacking understanding of current data techniques. Relying on the tools mentors used when they were climbing the scientific ladder can put students at a competitive disadvantage in technical areas that are rapidly evolving.

So Williams proposed developing “communities of practice,” to connect learners with others in their field interested in developing and understanding the same advanced data tools. He called them Commons, a shared pool of resources managed collectively by and for the benefit of the group. Scientists could shop there for skills they wanted to acquire. Williams came up with the idea when he worked on the National Institutes of Health Data Commons: he thought the same idea could be applied to skills as well as data.

Williams is dedicated to inspiring under-represented groups to join and remain in research. He believes women and minorities aspire at the same rates as their peers to enter the field of science. “While the interest is basically the same, the opportunities are not,” Williams warns.

He and the DNALC are reaching out to these groups through satellite centers in other areas, including at a new Center at City Tech near the Brooklyn Bridge. The new lab is a collaboration with the City University of New York. Next year, the Center will have six teaching labs, two bioinformatics labs, and an interactive exhibit.

The DNALC will open its newest and largest center in Brooklyn soon, where Williams looks forward to working with a range of students.

“One of my priorities at the new center will be developing new programs that tie biology and data science with outreach to underrepresented students and the faculty that educate them,” Williams said.

DNALC Founder and Executive Director David Micklos says, “we try to be the bioinformatics resource down the hall” to fill data science resource gaps for students or institutions. Williams leads the DNALC efforts to make sure no college is left behind in this field.

Williams suggests that some parents in under-represented groups in science prefer to see their talented teenagers become doctors. Williams helps families understand that science is an economically viable and rewarding choice for those who stick with it.

By teaching students and other scientific educators, Williams hopes he can move closer to the flashlight of his high school days. Williams recounted how a parent from a previous year’s class at Yeshiva University High School for Girls caught up to him in the parking lot and told him, “You changed my daughter’s life.”

Started in 1988 as the world’s first science center devoted to public genetics education, the DNA Learning Center teaches students about their genes. The largest provider of biotechnology education at the pre-college level in the country, the DNALC has public programs including summer camps and Saturday DNA! sessions. A vivid replica of Ötzi the Iceman, who met an untimely death over 5,000 years ago, greets you when you pass through an exhibit about him. The DNALC also provides school programs, supports student research and offers educator training. Among its attributes, the DNALC has: