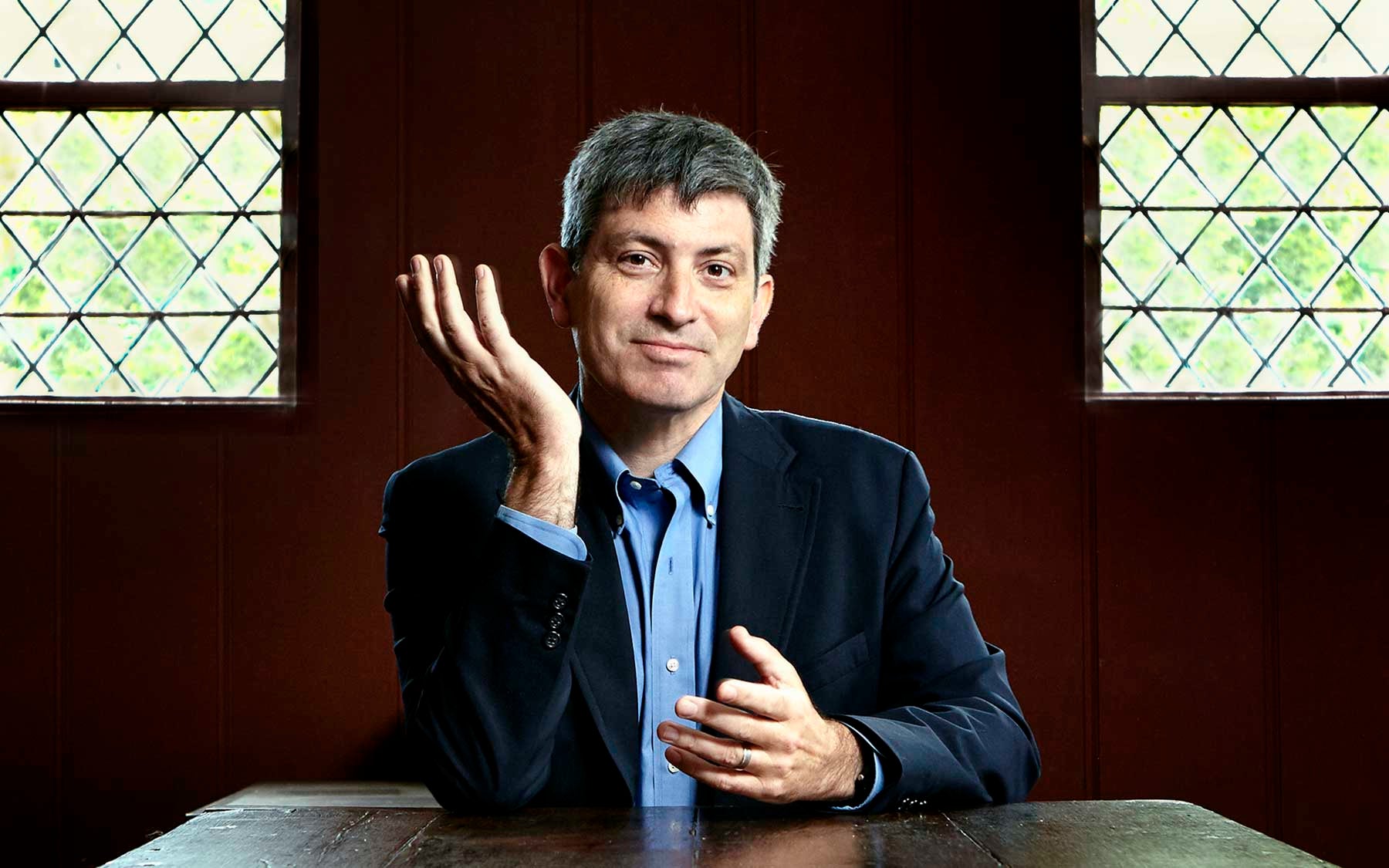 Carl Zimmer. Credit: Mistina Hanscom
email envelop icontwitter icon share buttonfacebook icon share buttonlinkedin icon share button
At this very moment, there is more Neanderthal DNA on Earth than there was when Neanderthals were alive. Bits of their DNA, inherited tens of thousands of years ago, persist in many of our genomes today. This astounding legacy is one of many revelations that renowned science writer Carl Zimmer uses to burst open readers’ thinking about heredity in his new book, She Has Her Mother’s Laugh. 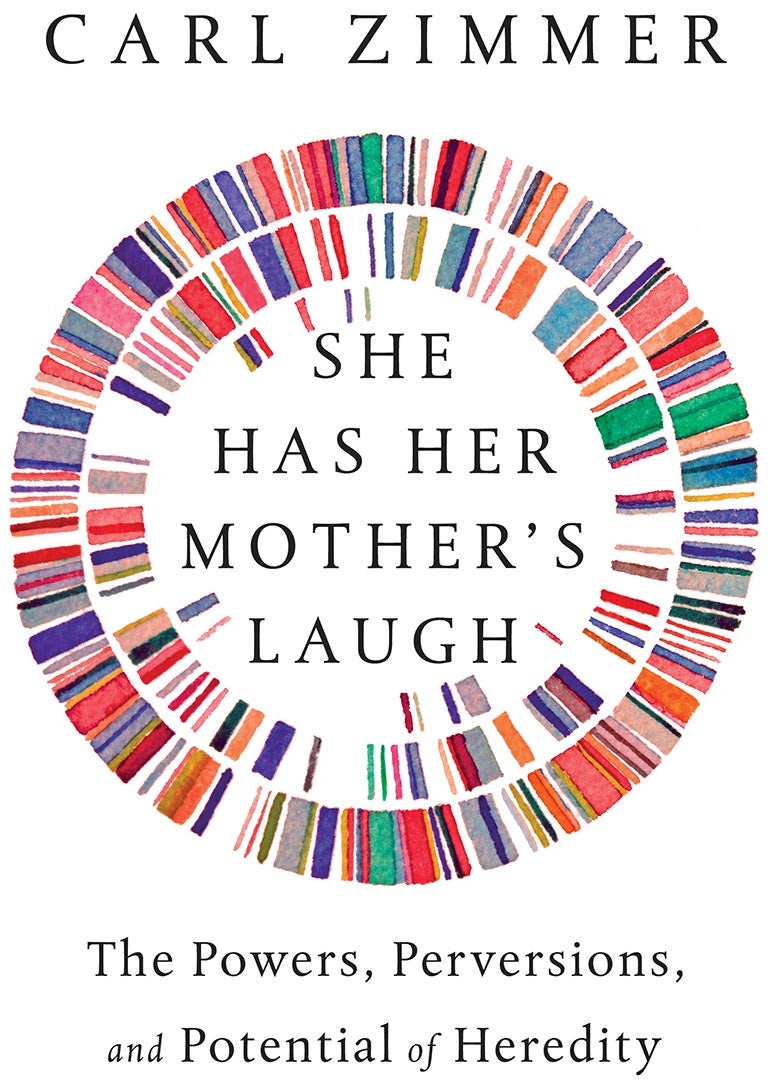 In his quest to understand what we’re born with, what we’re not, and why that matters, Zimmer travels throughout time and deep into the genome. His route takes him through Cold Spring Harbor Laboratory several times as he seeks out scientists whose work helps him understand the elaborate mosaic of heredity.

To discover how much Neanderthal ancestry he himself has, Zimmer brings his full genome sequence to Professor Adam Siepel. As Zimmer ponders the possibility of inheriting traits that are not in the DNA itself, but acquired over the course of a life via a process called epigenetic tagging, he consults Professor Rob Martienssen and the “flowering monsters” in his greenhouse. And when Zimmer looks to the future of editing genomes using tools such as CRISPR, Professor Zachary Lippman’s use of the technology makes him realize that he “didn’t truly appreciate what CRISPR meant to scientists” before.

LabDish spoke with Zimmer about what he learned as he zig-zagged through Cold Spring Harbor Laboratory while writing She Has Her Mother’s Laugh.

An edited transcript of the interview follows.

In the book, Professor Adam Siepel reveals details about your own ancient ancestry. Why did you take your genome sequence to him? Why is it important to understand our ancient heritage at this level of detail?

I think just for starters, it’s just cool. We can start pinpointing individual segments of DNA in our genomes that came from Neanderthals or other extinct kind of humans. It tells us a lot about our own species and our own evolution. It’s possible that it could even tell us some medically important things because these are pieces of DNA that were inside other people for hundreds of thousands of years and these pieces of DNA were evolving.

They may have been adapting to very different environments than Africa, where most of modern human ancestry began. They might actually be beneficial, and could protect us from diseases if we have the right pieces. On the other hand, they might be harmful. We may have pieces of DNA hanging around in our genomes that were good for Neanderthals but not good for us today. My experience in exploring my genome to find pieces of Neanderthal DNA has left me with a whole lot of questions because the connections between Neanderthal DNA and our health are still very, very tentative and a lot of it is just not clear at all.

Siepel keeps a model of a Neanderthal skull on his desk, right next to a photo of his kids. You write that, “A century beforehand, the scientists who work at Cold Spring Harbor would not have taken kindly to the pride of place that Siepel gave a Neanderthal.” What do you think this says about how far our understanding of heredity has come?

The science of heredity has traveled a huge amount in the past century and Neanderthals are a great example of that. One hundred years ago, there were leading experts in paleontology who would claim that Neanderthals were an inferior form of almost sub-human. They would also talk about Africans as having a subpar intelligence and all sorts of horrific racist statements. And, there were people at Cold Spring Harbor, like Charles Davenport, who were very much a part of this group of eugenicists who saw intelligence and other aspects of the human mind as being overwhelmingly determined by hereditary. They thought there were just genes and that this justified racism, race-based policies.

Now, as scientists are digging deeper into genetics where we can actually see individual pieces of DNA—now that we can pull out ancient pieces of DNA that are 50,000, 100,000 years old and look at them—we see that the history of humanity doesn’t fit any of those eugenicist fantasies. It’s much more complex, much more interesting, and shows that Neanderthal DNA is alive and well. If you add up all the pieces in Neanderthal DNA in living people, there is much more Neanderthal DNA on Earth now than there was when you had real Neanderthals walking around.

In this episode of CSHL’s Base Pairs podcast, Professor Adam Siepel discusses how he made a surprising discovery about how modern humans interacted with Neanderthals thousands of years ago, when both species walked the Earth.

The phenomenon of epigenetics—genetic changes that do not alter the DNA sequence itself—is one fairly recent change in our understanding of heredity. Scientists are still very much trying to figure out how epigenetics works, and Professor Rob Martienssen, whom you speak to in your chapter on the subject, is one of them. Why did you go to a plant scientist to learn about epigenetics, even though your book primarily explores the concept of heredity as it relates to humans?

I wanted to explore human heredity but in the context of heredity in other forms of life. Because we have a way of assuming that everything is like us and it’s not.

I initially reached out to Martienssen because I had read a big review that he had co-authored about transgenerational epigenetic inheritance. In other words, that it might be possible to inherit epigenetic changes through the generations. This would be a kind of heredity that was somewhat distinct from inheriting genes. This has been a subject that I’ve reported on and lots of other reporters have reported on. It’s very sexy. It’s very controversial. But Martienssen came out with this pretty comprehensive take-down of a lot of the more high-profile research.

To get a better sense of the impact that CRISPR genome editing could have, you went to another plant scientist. You write that you, “didn’t truly appreciate what CRISPR meant to scientists” until you talked with Professor Zach Lippman, who has used the technology to tweak crop plants’ growth and is looking toward using it to domesticate ground cherries, which are currently wild. What is it that you didn’t appreciate before?

Certainly, I’ve heard from a lot of scientists how CRISPR has become a sort of a standard tool for research and it’s accelerated research tremendously because you can just craft CRISPR molecules to edit DNA in lots of ways and do it quickly and cheaply. That’s led to a lot of sort of speculative talk about how maybe we can cure certain diseases or maybe it’s a huge danger to your species because someone will start editing humans. And I think we have to be careful not to get too swept away with that kind of speculation. But going and seeing what Zach was doing really drove home to me how just how dramatically you can make changes to a species as you learn the rules for how that species works.

In Zach’s case, he is essentially trying to rerun the agricultural revolution, turning wild plants into crops. Rather than spending centuries struggling on farms eking out an existence to do this, he might be able to just do it in a single generation of plants. Once you have figured out why plants flower at a certain time and what controls that and all these other rules, if you just use CRISPR to plug in all those elements into a plant, well it might be an entirely different, fundamentally different kind of plant. And the fact that he was already taking some steps in that direction, that he was changing the shape of these ground cherry plants was just really astonishing to me. I can see how certainly CRISPR will have a big impact on the food we eat very soon. You are really starting to breed plants from almost first principles.

Professor Zach Lippman describes how his team’s use of CRISPR genome editing could help crop plants cope with the effects of climate change in this episode of CSHL’s Base Pairs podcast.

One plant researcher who continues to have a huge impact on the food we eat is George Shull, who discovered in the early 1900s that breeding hybrids of plants allowed farmers to grow far more food. Why did you find his work to be an important example of the power of heredity?

In my book, I talk about how breeding plants has been a place where heredity has mattered to us for thousands of years. That people who breed plants and animals are constantly trying to understand how it is that certain traits get passed down from ancestors to descendants. Gregor Mendel came out of that tradition. But in terms of actually breeding new varieties of plants, for a long time it was almost kind of like magic. I focus in the book on one person named Luther Burbank who was called the plant wizard. If you go to McDonald’s and order French fries, you’re eating his potatoes. If you grow Shasta daisies in your garden, those are his.

Cold Spring Harbor actually was the place where a lot of the research for modern plant breeding got its start, breeding hybrid corn. George Shull is a really interesting sort of small character in my book. He was sent from Cold Spring Harbor to go hang out with Luther Burbank and figure out what his secrets were. And he very valiantly tried for several summers to figure out what was going on and then just walked away and said that there was no science there at all. And the irony is, when he wasn’t trying to crack the mystery of Luther Burbank, he was doing the first experiment on hybrid corn which completely revolutionized the way we grow food. I just found that fascinating.

Professor Rob Martienssen tells the story of how George Shull revolutionized modern agriculture in this episode of CSHL’s Base Pairs podcast.

She Has Her Mother’s Laugh by Carl Zimmer is now available.