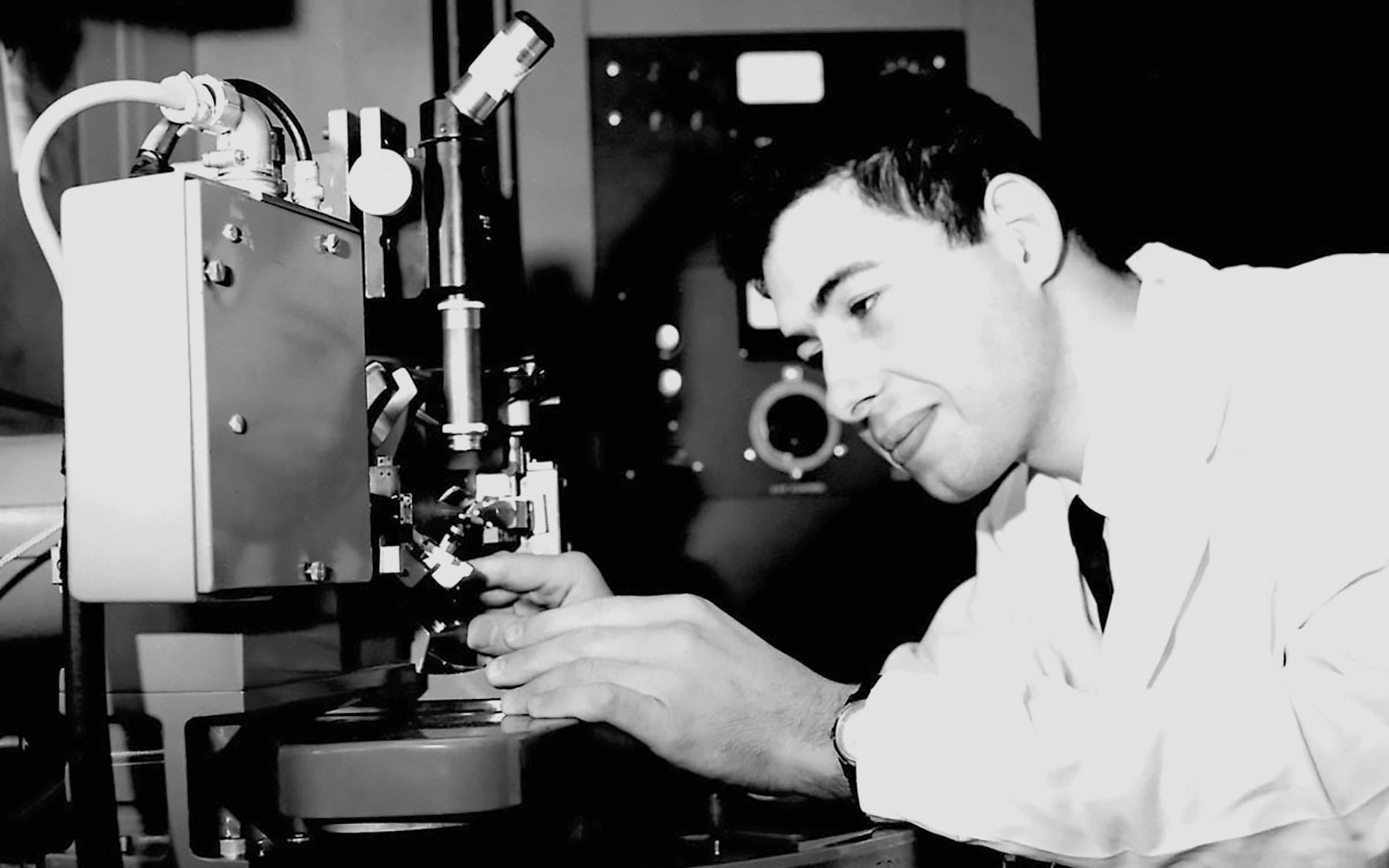 David Haas collecting diffraction data with the original Harker-Furnas Goniostat at Roswell Park Memorial Institute (1964).
email envelop icontwitter icon share buttonfacebook icon share buttonlinkedin icon share button
For decades, David Haas had all but forgotten about the crystal freezing technique he invented in the late 1960s for visualizing molecules. But while he was off working in the manufacturing industry, this technique was helping researchers develop drugs for HIV, among other diseases. It facilitated Nobel Prize-winning advances including cryo-electron microscopy, which won the prize for Chemistry just last year. And as Haas saw firsthand, it’s now so standard that students learned it as part of a recent CSHL course.

By the time his groundbreaking paper was published, in 1970, Haas had left science. He found success elsewhere, by inventing a secure ID badge that quickly became popular, and developing the x-ray machines that scan your luggage at the airport.

As for his scientific work, “I never thought it had any impact,” he says. When he talks about reconnecting with science and finally learning about his freezing technique’s significance, Haas often uses the word “unbelievable.” That’s how the X-ray Methods in Structural Biology course from CSHL Meetings & Courses ended up with a pioneer of structural biology as a student: he wanted to see it for himself.

Structural biology is an entire field devoted to figuring out what molecules look like. While it may not be well known among non-scientists, it has become an indispensable tool in discovering many of the drugs that we rely upon. Haas invented the crystal freezing technique to solve a big problem with a method called x-ray crystallography, which uses x-ray beams to determine a molecule’s three-dimensional structure. Shooting x-rays at crystallized forms of specific molecules yields data that scientists can use to figure out the molecule’s structure—but the x-rays would also quickly degrade these precious and delicate crystals.

Replacing a damaged crystal was possible, but it meant painstakingly adjusting complex calculations to account for the different sizes and shapes of each crystal. It was “a tremendous nuisance,” Haas says. Back in the 1960s, very few protein structures had been solved because this process took years. At the X-ray Methods course, Haas and his fellow students solved the structure of a protein called lysozyme—the same molecule he used in his early work—in just two hours. They used a machine known as a synchrotron, which exposes the crystals to intense x-ray radiation that could destroy them. This is why scientists now routinely freeze their crystals to temperatures well below zero before bombarding them with radiation—it protects them from damage.

Haas discovered this phenomenon while at the Weizmann Institute in Israel. When he saw that the frozen crystals remained intact for experiment after experiment with x-rays, he recalls thinking “wow, this is new.” But in June of 1967, the Six-Day War began in Israel and the lab cleared out to serve in the Israeli army. “I kept doing whatever I could—and scientists, they put you on the fire brigade in case,” Haas says. He soon left for Purdue University, where he continued and eventually published his crystal-freezing work, but it generated little interest. After all, he had gone through, Haas grew weary of fighting to gain recognition for his technique. He got a job at Philips, a major electronics company, and checked out of academic science.

This past year, it was completely surreal for Haas to prepare frozen crystals along with the other students at the X-ray Methods course. Though he hadn’t done it in over 45 years, it was incredibly familiar because it “was exactly the way I did it back then,” he says. But a lot has changed. Technologies such as the synchrotron and, more recently, cryo-electron microscopy or cryo-EM, are enabling scientists to visualize the structure of molecules with unprecedented clarity using high levels of radiation and frozen specimens. Cryo-EM, which also makes use of “flash-freezing” techniques, is especially valuable because it can capture the structure of large molecules that are impossible to crystallize. Cryo-EM is proving to be so important that CSHL now has its own facility, and is offering its first cryo-EM course this spring to train scientists from around the world to use this critical technology.

Haas got word that he was accepted to the X-Ray Methods course in February of 2017, and “spent all of 2017 until October just waiting—I mean, it was like going to the royal ball,” he says. While he never got any major awards for his work, for him this was “like I won the prize, the big prize.” His scientific journey is remarkable, yet emblematic of the nature of basic research. He recalls how his Ph.D. advisor at SUNY Buffalo would say that you might be amazed at how someday what you publish might be used for something. “That’s the thing about scientific work,” Haas says. “It never goes out of style.”