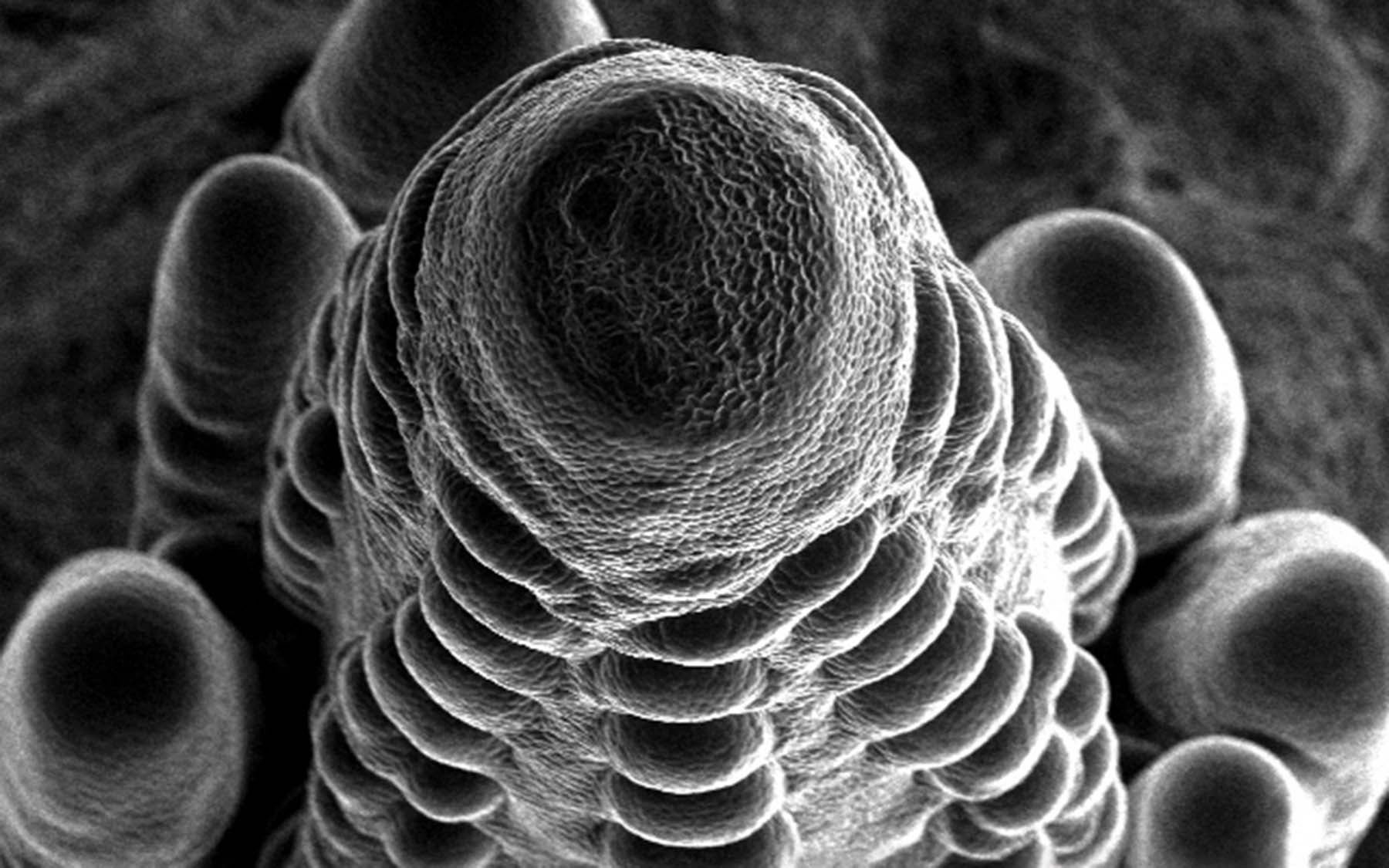 This electron microscope image of the growing tip, or meristem, of a corn plant tassel shows how it is enlarged in plants in which the gene COMPACT PLANT2 (CT2) is mutated. Within the meristem are stem cells that can develop into various cell types.
email envelop icontwitter icon share buttonfacebook icon share buttonlinkedin icon share button

In plants, the growth of organs such as roots, leaves and flowers depends upon the activity of meristems.

Cold Spring Harbor, NY — In plants, the growth of organs such as roots, leaves and flowers depends upon the activity of meristems. These reservoir-like compartments hold stem cells, which have the ability to develop into various different cell types.

At Cold Spring Harbor Laboratory (CSHL), Professor David Jackson studies naturally occurring mutations in plants to obtain insights about how plants regulate their growth. This work has powerful implications for efforts to increase the yield of basic food crops like maize (or corn, as it is called in North America).

Today, in a paper appearing online in Nature, Jackson and colleagues present first evidence of a functional interaction between an important class of signaling molecule called a G protein, which binds receptors, and an unexpected class of cell-surface receptors.

The “beginning” and “end” of the CLAVATA signaling pathway were known: receptors at the cell surface are activated by a small, secreted ligand to regulate a transcription factor called WUSCHEL inside the nucleus. The Jackson lab’s new research begins to fill in the gaps between these points.

Contrary to prior assumptions based on examples in mammals and yeast, the new research suggests that in plants, Gα, which acts as a signaling switch, can be activated by a G protein-coupled receptor (GPCR) that belongs to a class of cell-surface receptors that pass the cell membrane only a single time.

“The idea that Gα interacts with a single-pass transmembrane receptor called FEA2 is at odds with the dogma that in yeast and mammals, Gα interacts with GPCRs of the type that pass through the membrane seven times—7TM receptors. Further research should indicate whether this is true not only in maize but generally in plants,” Jackson says.

The research described in this release was supported by a DFG grant, a BARD Post doctoral award, Dupont- Pioneer, and the National Science Foundation Plant Genome Program.

“The maize Gα gene COMPACT PLANT2 functions in CLAVATA signalling to control shoot meristem size” appears online ahead of print in Nature on September 11, 2013.  The authors are: Peter Bommert, Byoung Il Je, Alexander Goldshmidt and David Jackson. The paper can be accessed at http://www.nature.com/nature/index.html.