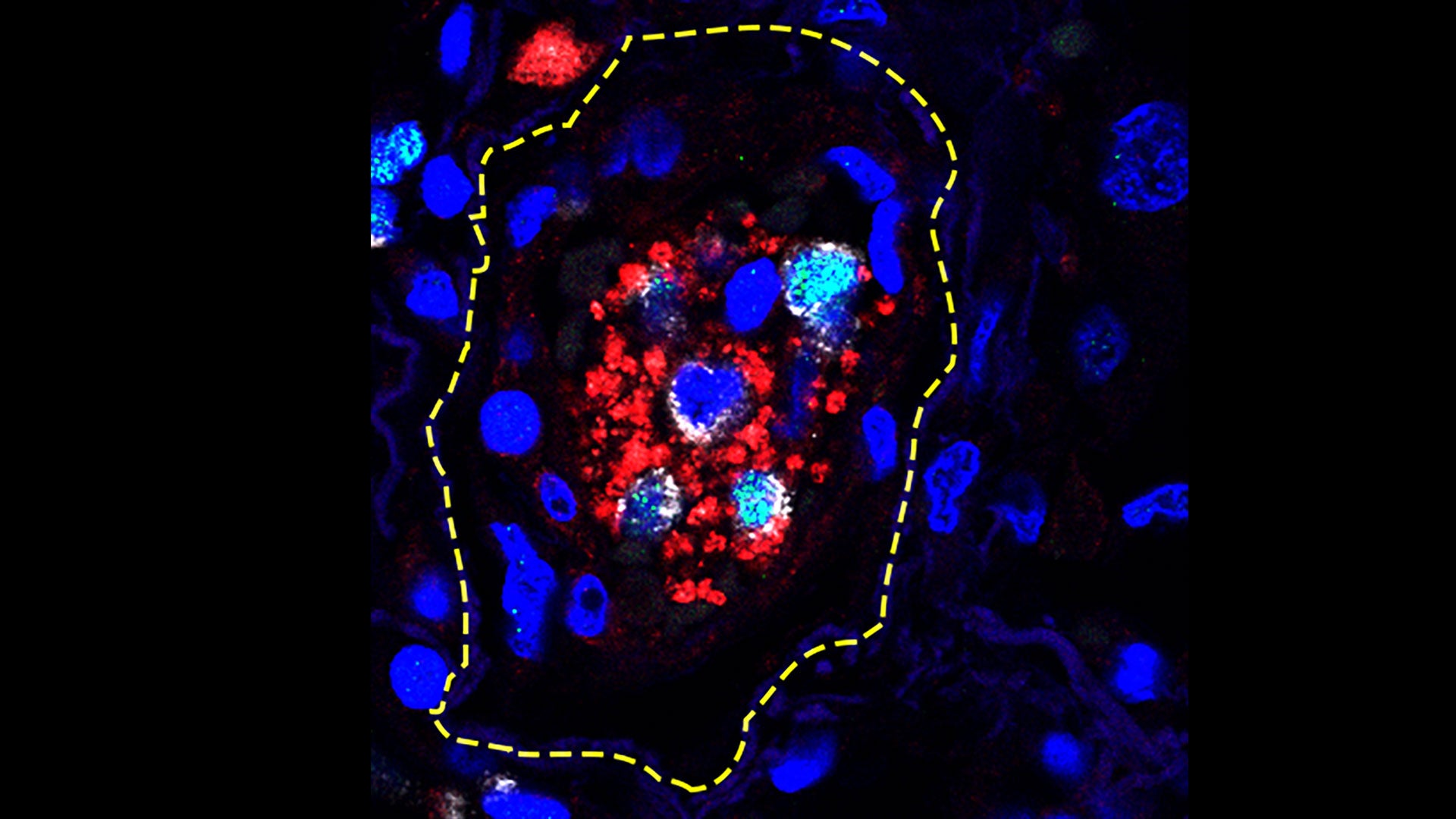 This image shows overactive immune cells causing a blood clot in the lung of a patient who died of COVID-19. Sometimes signals in the body can throw off the immune system and create localized environments that may enable diseases, like serious COVID-19 and cancer. Cold Spring Harbor Laboratory Professor Mikala Egeblad studies the immune cells, blood vessels, chemical signals, and other components within tumors, collectively known as the tumor microenvironment. Cancer cells that metastasize (wander) from their points of origin may find other hospitable microenvironments and take up residence. Egeblad reasons that the signals in the microenvironment can be manipulated to make conditions less welcoming. Her findings translate to different cancer types and are relevant to diseases like COVID-19. Image: Xue-Yan He and David Ng/Egeblad lab
email envelop icontwitter icon share buttonfacebook icon share buttonlinkedin icon share button
Why do some cancers spread throughout the body?”

Cancer cells live in a complex neighborhood populated by immune cells, blood vessels, and other structures. Signals crisscross the neighborhood: cells tell each other who is there and what they want. Cancer cells may want to hide their identity or otherwise influence this neighborhood—or microenvironment—so they can grow and spread more easily.

Cold Spring Harbor Laboratory (CSHL) Professor Mikala Egeblad wants to know what creates an ideal microenvironment for a wandering cancer cell. Egeblad reasons that if she can decode the signals in the neighborhood, she can look for ways to harness those signals to defeat cancers. She started with breast cancer.

Breast cancer is the most common cancer diagnosed among women in the U.S. Many tumors are metastatic, meaning they can spread from where they are born. One reason is that breast cancer cells are particularly clever at influencing their microenvironment.

Tumor-associated macrophages can act like a security team hired by the cancer cells to protect them. However, certain drugs and vaccine components can also reprogram macrophages to do different jobs. Interferon-gamma, a signal used by immune cells to communicate with one another, can stop a macrophage from helping cancer cells. But that is not enough to treat a cancer. Egeblad wondered if adding an additional immune system activator might be more effective. She decided to use something in vaccines that boosts the immune system, called MPLA (monophosphoryl lipid A).

Do ovarian cancers use the same kinds of security guards?

Egeblad’s macrophage research attracted the attention of people interested in other types of cancer. In 2018, she was approached by the Katie Oppo Research Fund, an organization named after nineteen-year-old Katie Oppo. Katie died of small cell carcinoma of the ovary, hypercalcemic type (SCCOHT) in 2011. Her mother Elizabeth Oppo runs the foundation and she seeks out scientists that can help find causes and treatments for SCCOHT and other ovarian cancers.

After meeting with Oppo, Egeblad became inspired to try and apply the macrophage research she was conducting on breast cancer to ovarian cancer. The Fund donated $75,000 to Egeblad to pursue this study.

Sun and Egeblad found that the two drugs that reprogrammed macrophages in breast cancer were also extremely effective against ovarian cancer in mice. In both cancers, the treatment slowed metastases, and it made ovarian tumors more susceptible to chemotherapy. They published the results in Cancer Cell on September 2, 2021. Oppo is hopeful that Egeblad’s discovery can provide a step in the right direction for treating ovarian cancers, including SCCOHT. She believes her daughter Katie would be thrilled at the increasing awareness, research, and information about ovarian cancer today. Oppo says:

“She wanted to know everything she could possibly know about this cancer because she knew that the only way to fight it was to get information. And she did this with incredible bravery and openness, and she told us, all of her family and her friends, that if she survived, she was a hundred percent going to give back and spread light on the darkness of this extremely devastating disease. So we’re just continuing that fight.”

Just as macrophage “reprogramming treatment” is not limited to breast cancer, the microenvironment influences diseases beyond cancer. At the start of the SARS-CoV-2 pandemic, scientists were trying to understand the causes of the disease’s symptoms. Egeblad noticed that some of the most severe symptoms of COVID-19, including the formation of blood clots, were similar to symptoms in some patients with late-stage cancer. In those cases, another type of cell in the immune system, called a neutrophil, is triggered. These cells can form sticky neutrophil extracellular traps, or NETs, which normally help trap pathogens when the body is under attack. However, too many NETs can be toxic, especially in the lungs, where they can cause tissue damage and respiratory distress. They can also cause blood clots. Egeblad says, “The link between COVID-19 and NETs was almost like a jigsaw puzzle piece where the pieces fit together: viruses can cause neutrophils to make NETs, and NETs can cause lung damage and blood clotting—some of the severe symptoms seen in COVID-19.”

Like macrophages, neutrophils may be able to play opposite roles in cancer. Egeblad suggests that neutrophils could be manipulated and become therapeutic targets.

What began for Egeblad as a detailed examination of one kind of cell in a specific kind of cancer turned out to be relevant to other diseases. To her, the future of microenvironment research involves finding how to balance competing immune signals throughout the body. Especially for cancer, she says:

“We want to understand both the good and the bad side of the microenvironment. It is clearly too simplistic to think that the microenvironment always helps the tumor grow faster or that it always restrains it. So it’s really a balance. Beyond that, we are also starting to understand how cells and signals outside of the tumor—elsewhere in the body—are affecting the tumors. We are starting to get a better understanding of the role of this “macro” environment in driving or restraining cancer.”

Elizabeth Oppo is optimistic that Egeblad’s quest to harness the immune system will lead to more effective treatments: “Immunology is a new frontier that can move us away from generalized chemotherapy to more refined and targeted treatments.” Finding ways to restore balance to the body’s crossed signals may answer questions about how to treat complicated diseases.

Egeblad came to CSHL in 2009 to study the tumor microenvironment. She told me “the tumor is not just cancer cells in isolation. You can’t understand them without understanding the environment in which they live.” She first got interested in the microenvironment as a graduate student in Copenhagen, looking for what drives metastasis of breast cancer. In collaboration with another research group (that of Kari Aitola), she was studying a factor that didn’t have any direct effects on the cancer cells, but instead altered the environment in which the cells lived and thereby contributed to how well tumors could spread. Later she started systematically trying to target bad microenvironments and support good ones to combat cancer.

Creating a community for hope

CSHL researchers began studying sarcoma in 2014, thanks in part to the encouragement and investments of three local foundations.   Read more »