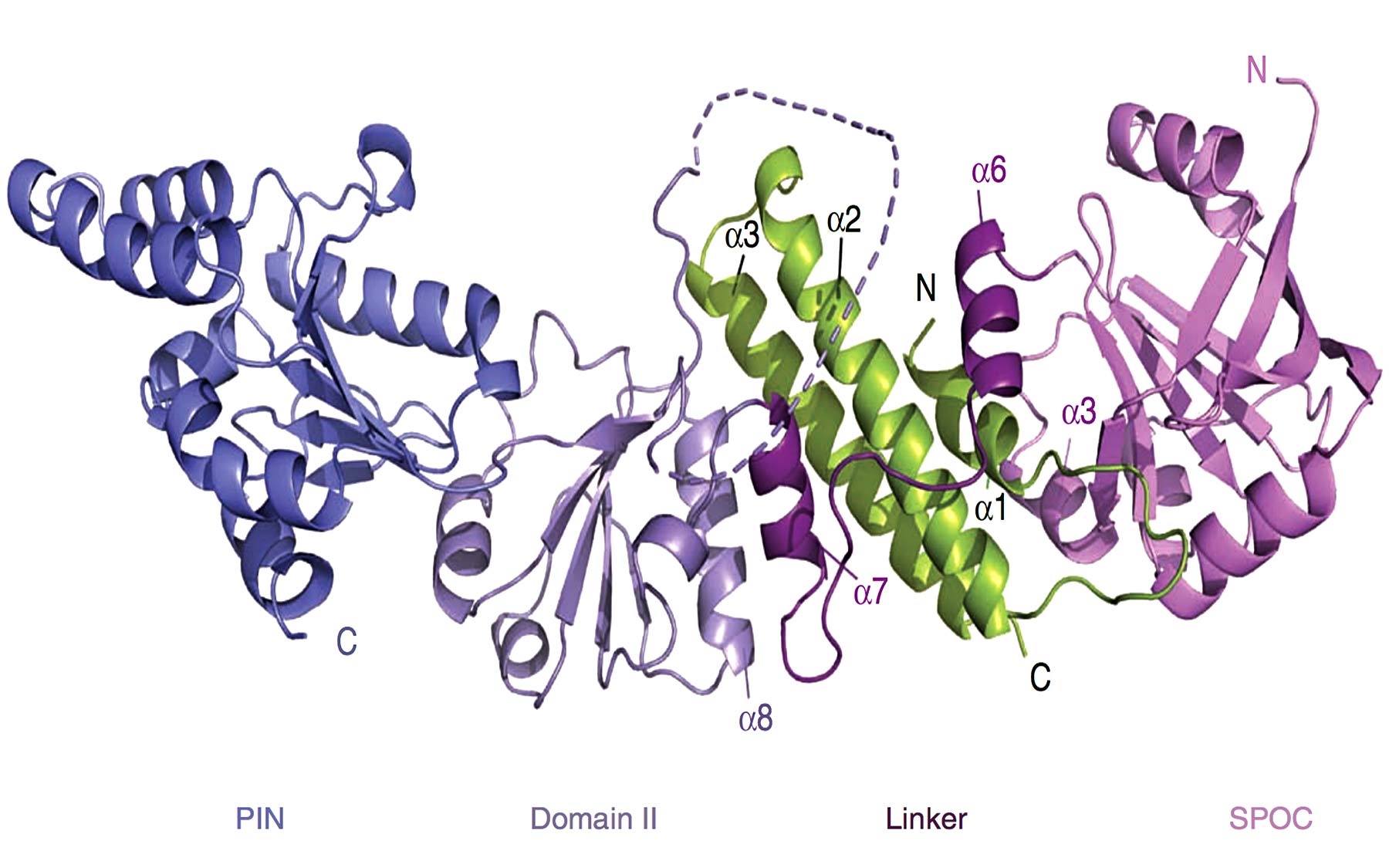 Cold Spring Harbor, NY — A cell’s genome maintains its integrity by organizing some of its regions into a super-compressed form of DNA called heterochromatin. In the comparatively simple organism fission yeast, a cellular phenomenon known as RNA interference (RNAi) plays an essential role in assembling heterochromatin, which keeps the compressed DNA in an inactive or “silent” state. Central to this process is a large protein complex that physically anchors various molecules involved in heterochromatin assembly to the chromatin fibers.

By probing the three dimensional structure of this protein complex, called RNA-Induced Initiation of Transcriptional gene Silencing (RITS), scientists from Cold Spring Harbor Laboratory (CSHL) and their collaborators at St. Jude’s Research Hospital have discovered new details of how its various parts or “domains” contribute to heterochromatin assembly and gene silencing. The study appears in Nature Structural and Molecular Biology on November 13.

“Heterochromatin formation relies on the RNAi pathway, and the RITS complex is the central, linking player that makes this possible,” explains CSHL Professor and HHMI Investigator Leemor Joshua-Tor, Ph.D. The RITS complex is composed of three proteins, including Ago1, a key component of the cell’s RNAi machinery. When Ago1 binds to small interfering RNAs (siRNAs) that originate from a specific genomic region, it helps shut down the activity of that genomic region.

The second member of the RITS complex is a protein called Chp1, which acts like a molecular Velcro that specifically attaches to those areas of chromatin that have been chemically marked by methyl groups. The third RITS component is a largely flexible protein called Tas3 that bridges Chp1 and Ago1.

“Our strategy to understand how these various modules of the RITS complex work has been to find out what these structures look like and how they connect to each other and to chromatin,” says Joshua-Tor. For the last few years, her team has explored these questions in fission yeast.

In the current study, the combined use of X-ray crystallography and biochemisty by Research Investigator Thomas Schalch, Ph.D., has yielded a much better picture and revealed further details of how Chp1 interacts with the Tas3 protein. These experiments have also identified a previously unknown substructure at the very end of Chp1.

A clue about what role this structure, called the PIN domain, might play in heterochromatin assembly came from scouring a protein database. The team found that other proteins that had similar structural features were associated with telomeres, the cap-like structures at the end of chromosomes. In fission yeast, telomeres are one of the locations where heterochromatin is found, another being the centromere—the dense knob-like structure at the center of a chromosome.

The team found that deleting the PIN domain from Chp1 prevented heterochromatin formation at the telomeres but didn’t affect formation at the centromere. “This suggests different functions of RITS proteins at centromeres vs telomeres,” says Joshua-Tor. “RITS might be exerting its effect at centromeres through Ago1 and the RNAi machinery, but might enforcing its function at the telomeres through Chp1 and its PIN domain.” The team is now turning its focus to understanding how these various functions are regulated.

This work was supported in part by a Human Frontiers in Research Program fellowship and the Louis Morin Charitable Trust.

“The Chp1-Tas3 core is a multifunctional platform critical for gene silencing by RITS,” appears in Nature Structural and Molecular Biology on November 13. The full citation is Thomas Schalch, Godwin Job, Sreenath Shanker, Janet F Partridge & Leemor Joshua-Tor. The paper can be downloaded at http://www.nature.com/nsmb/journal/vaop/ncurrent/full/nsmb.2151.html

A CSHL faculty member since 1995, a professor since 2005, Joshua-Tor is among the most distinguished members of the Laboratory community.   Read more »