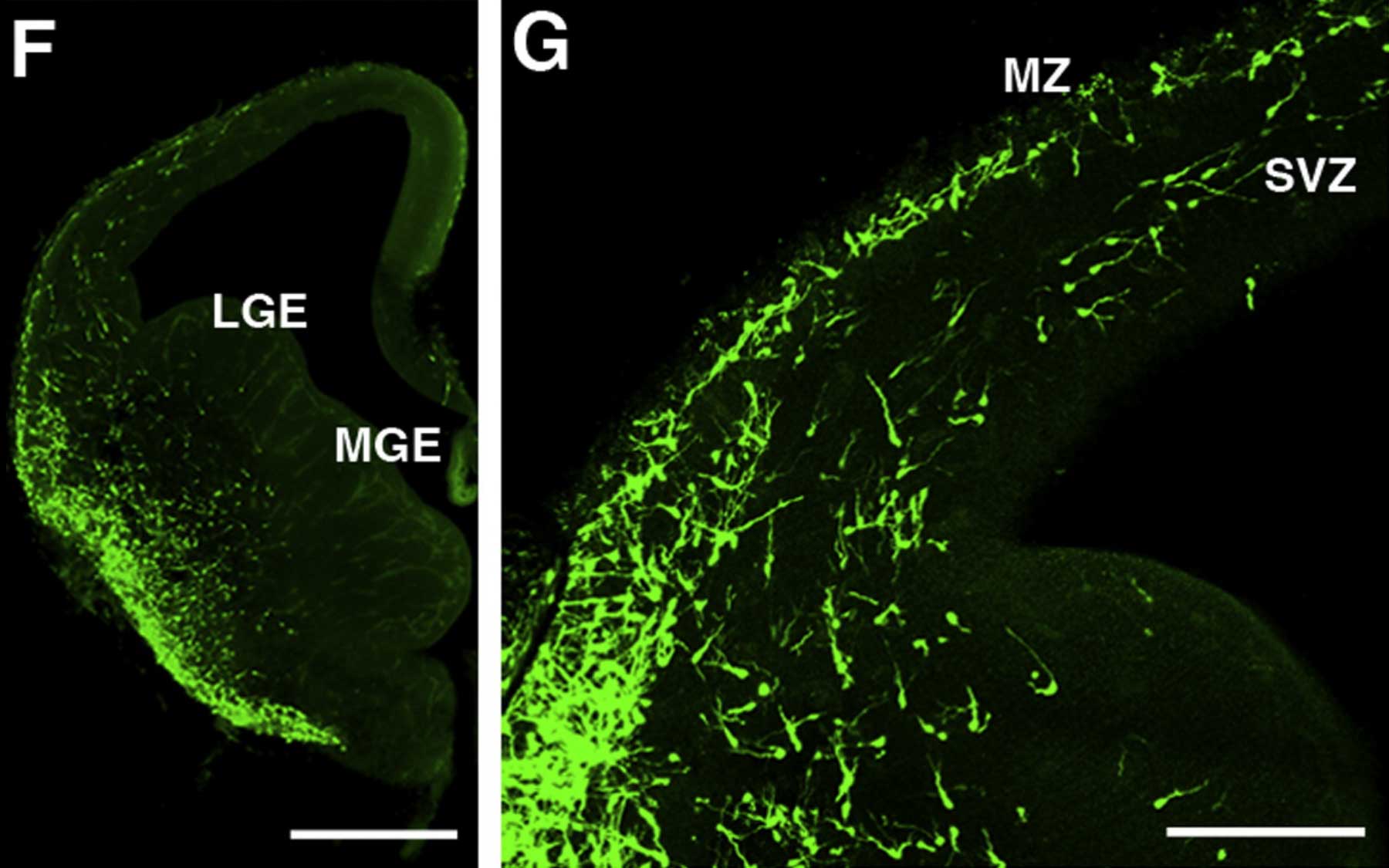 Cold Spring Harbor, NY — A team of neuroscientists at Cold Spring Harbor Laboratory (CSHL) has succeeded in creating what amounts to a GPS system for locating and tracking a vital class of brain cells that until now has eluded comprehensive identification, particularly in living animals.

The cells in question are the class of neurons that release the neurotransmitter called GABA (gamma aminobutyric acid). GABA neurons function to inhibit or dial down the intensity of nerve signals propagated by excitatory neurons, which are triggered by neurotransmitters such as glutamate.

Excitatory neurons account for about 80% of all the neurons in the mammalian cortex. But without the modulatory intervention of the much rarer GABA neurons within the circuits they form, normal brain function would be impossible. Uninhibited neuronal excitation would lead to a constant state of seizure something like what is seen, episodically, in epilepsy.

Neuroanatomists have been trying to map the brain’s circuitry for well over a century, but the organ’s astonishing complexity—anatomical and functional—has ensured that progress has been slow. Researchers have been able to map the entire set of circuits in the roundworm C. elegans. But that humble creature has only 302 neurons. The brains of mammals have millions of neurons, and within the tangle formed by their projections, called axons and dendrites, one finds those vital GABA cells, which until now could not be identified in any consistent way globally, throughout the mammalian brain.

CSHL Professor Z. Josh Huang and colleagues in his neuroscience lab have spent portions of the last five years working on a project to comprehensively label GABA neurons. The results of their highly time-consuming labors are described in a paper appearing Sept. 22 in the journal Neuron.  The paper is likely to be influential in the neuroscience community since it describes the creation of different lines of mice expressing genetic triggers that enable GABA neurons to be identified very specifically, by subtype, and to be tracked and manipulated in real time in living animals.

A multi-faceted toolkit for all scientists to use

Called “Cre driver lines,” Dr. Huang’s approach makes use of a well-established and widely used technique called Cre-Lox recombination to create the equivalent of genetic handles in specific types of cells within the cerebral cortex. Different strains of mice have been developed, each to express a particular gene or genes that enable microscopists to home in on particular subtypes of GABA neurons. The key, Huang explains “is that the ‘driver’ in each case is a gene that we know something about. We know its expression correlates with a subset of GABA neurons.  We use that gene as a kind of entry point to express various kinds of markers.”

The current paper describes 20 mouse lines that have been engineered in various ways. These can be used to activate molecular “reporters” that label different GABA cell types, or to make the targeted cells responsive to beams of colored laser light—a technique called optogenetics. They also enable researchers to follow axonal paths that connect particular GABA cells with other cells by incorporating deactivated retroviruses. “Optogenetics and retroviral labeling are wonderful techniques, but they are not, by themselves, cell-type specific. We’ve built a system that integrates all of these technologies, which can now be mobilized with exquisite specificity,” Huang says.

The net result is a toolkit—which will grow to include more mouse lines—for the use of experimentalists in labs everywhere, and which enables comprehensive and systematic exploration of inhibitory GABA neurons. Perhaps most exciting to Huang is the opportunity to view the manner in which inhibition functions in a living brain.

“The functional circuit, even though it is so complex, is in a sense being configured every second, every minute that we live, and on a massive scale within the brain.  It has to be incredibly dynamic, responding to incoming inputs continuously. As this information is coming in, the circuit is adjusting within a time scale on the order of tens of milliseconds.

“You can think of the inhibitory modulation as a system of control for ensembles of neurons, both in spatial and temporal terms. It’s a system that must depend upon a very stringent genetic program—we can assume this is true since the outcome is almost always right. But we also know how important the proper ‘tuning’ must be, based on our observations of neuropsychiatric and other brain illnesses. If the system is not in balance, you can have major illnesses such as schizophrenia or autism or epilepsy.”

While the main purpose of the work just published was to create a resource for neuroscientists, the Huang lab’s first experiments with newly engineered mouse lines have enabled them to see things never before seen.  In one experiment, the CSHL team has been able to track the migration of GABA neurons from the site of their “birth” in a structure called the MGE (medial ganglionic eminence), along a route that takes them to specific spots within the cortex.  “It’s fascinating,” says Huang. “They are generated far outside the cortex—to make an analogy, it’s as if they were born in Africa and take various but very specific routes to another continent.  Once you track them, as we have, you can see these paths are not random; they are like highways.”

More generally, says Huang, “Not only can we now watch specific inhibitory cell types from early in development; we can also watch as they migrate and establish connections, grow dendrites, make synapses. I would argue this ‘Gene-based cell Positioning System’ is even better than GPS, because it allows us to track how the circuits actually assemble.”

This research was supported by grants from the National Institutes of Health.  Participating scientists were sustained in part by a NARSAD postdoctoral fellowship, a McKnight Fellowship and a Simons Investigator award.