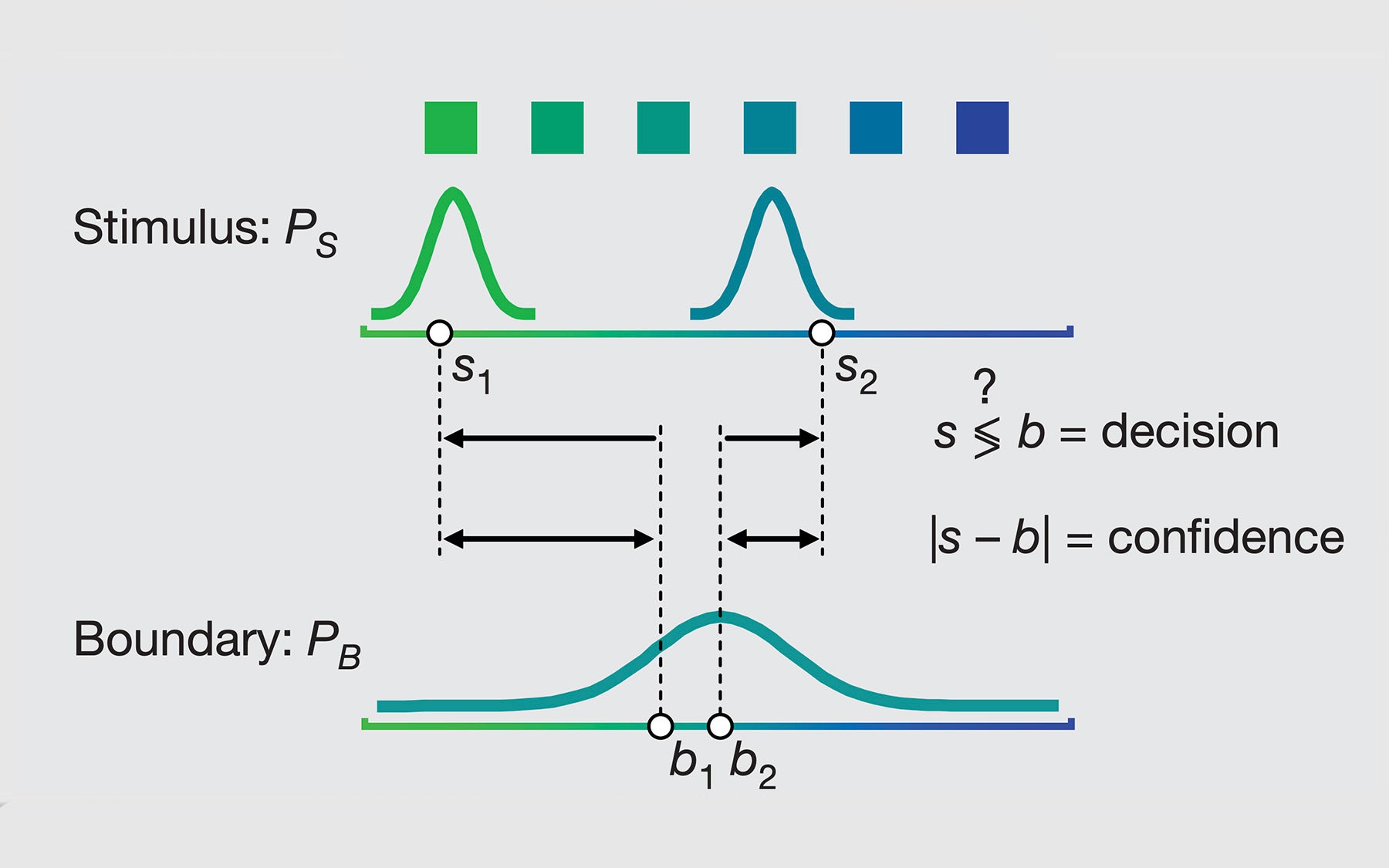 Cold Spring Harbor, NY — It has probably happened to everyone at one time or another. You’re driving to a restaurant for the very first time. At a crossroads, you make a turn. You drive for several minutes, and then several minutes more. Nothing in sight. The disturbing thought creeps into your mind: “I should be there by now. Did I make the wrong turn?”

At what point will you make a u-turn and go back? It all depends on how confident you are of the decision you made at the crossroads. If you are following a mere hunch, you may decide to go back. If you are following printed directions issued by the restaurant, you may have much more confidence in your decision and continue along in the same direction.

A sense of what we know—and don’t know

Having a sense of what we know—and don’t know—is a universal human experience, and has often been assumed to be the hallmark of self-consciousness. But new research by neuroscientists at Cold Spring Harbor Laboratory (CSHL) suggests that the estimation of confidence that underlies decisions may be the product of a very basic kind of information processing in the brain, shared widely across species and not strictly confined to those, like us, that are self-aware.

This remarkable prospect arises from experiments performed on laboratory rats and reported this week in Nature by CSHL Assistant Professor Adam Kepecs, Ph.D., in collaboration with Zachary F. Mainen, Ph.D., CSHL Associate Professor and Group Leader in the Champalimaud Neuroscience Programme at the Instituto Gulbenkian de Ciênçia near Lisbon, Portugal.

“We all possess some intuitive sense; we know our convictions from our mere hunches,” said Kepecs, who heads a lab at CSHL devoted to uncovering neural circuitry underlying decision-making. “This sense of confidence, or lack thereof, is critical to our success, but how it arises in the brain has long been a mystery.”

To solve it, Kepecs, Mainen and colleagues trained rats to make decisions of different difficulty. Because rats excel at olfaction, this was achieved by repeatedly presenting them with odors composed of mixtures of two chemicals and asking them to determine which component was stronger in order to receive a small reward.

By precisely varying the exact mixture of components, it was possible to manipulate the difficulty of the decision and therefore the animals’ predicted level of uncertainty. This task is akin to asking a human whether a particular blend of blue and green colors is more blue or more green. Confidence is typically highest when the blend is mostly green or mostly blue. Uncertainty is highest when the blend contains nearly equal amounts of each color.

The team recorded signals from individual neurons in the rodents’ brains while they were put to the test of distinguishing smells. They found that neurons in a part of the brain known as the orbitofrontal cortex (an area of the brain found in both rats and humans) signal the uncertainty of the decisions, “firing” much more vigorously in difficult tests compared with easier tests.

“These neurons seem to have been registering, after the rat made its decision, how uncertain the animal was that it was about to receive its desired reward,” Mainen explained. “We tested several alternative explanations but the best explanation for the neural activity we observed was that these neurons were signaling the confidence of the animal about its decisions.”

The results were surprising. “Although previous work had suggested that confidence estimates might be a complex process restricted to humans and perhaps other primates,” said Kepecs, “our results, to the contrary, show that for the brain to estimate confidence in a choice is no more complex than calculating the choice itself.”

How confidence can guide behavior

Having demonstrated that rat brains make confidence calculations, the researchers sought a way to demonstrate whether such calculations informed the rats’ behavior. They ran a series of olfaction trials that featured an important modification of the original task design. As in the first set of trials, rats made decisions involving the discrimination of two smells; they were rewarded, after a defined period of delay, if they decided correctly, and received nothing if their decision was incorrect.

In the modified task, the reward delay was increased substantially. However, while waiting for the reward, the rats were given the option to abort the trial—short of learning whether their decision was right or wrong—and return to the beginning to start a new trial. “This new option to abort and restart constitutes a decision that should be made based on the level of confidence about getting a reward,” Kepecs said. This is similar to the decision to make a u-turn when not finding the restaurant in the example above: whether and when you will turn back depends on how confident you are about the decision made at the crossroads.

Kepecs and Mainen surmised that if the rats were not confident about their original decision about the smell, they would be more likely to abort the trial. “Ultimately, confidence about getting a reward is a direct function of the animals’ confidence about the decision they have just made. In this way, we sought to measure a variable internal to the animals—how confident they were about whether they made the right choice or not—by observing how it influenced their behavior.”

The researchers did indeed find that rats preferentially aborted uncertain trials. This showed that they could not only calculate their level of confidence in a given decision, but also use that calculation in subsequent decisions to guide behavior.

Taken together, these experiments reveal “that confidence estimation is not a complex function specific to humans but a core component of the process of decision-making probably found throughout the animal kingdom,” said Kepecs. According to Mainen, “future studies of this kind may illuminate the question of how we form an intuitive sense of the solidity of a belief, how we distinguish fact from fiction itself.”