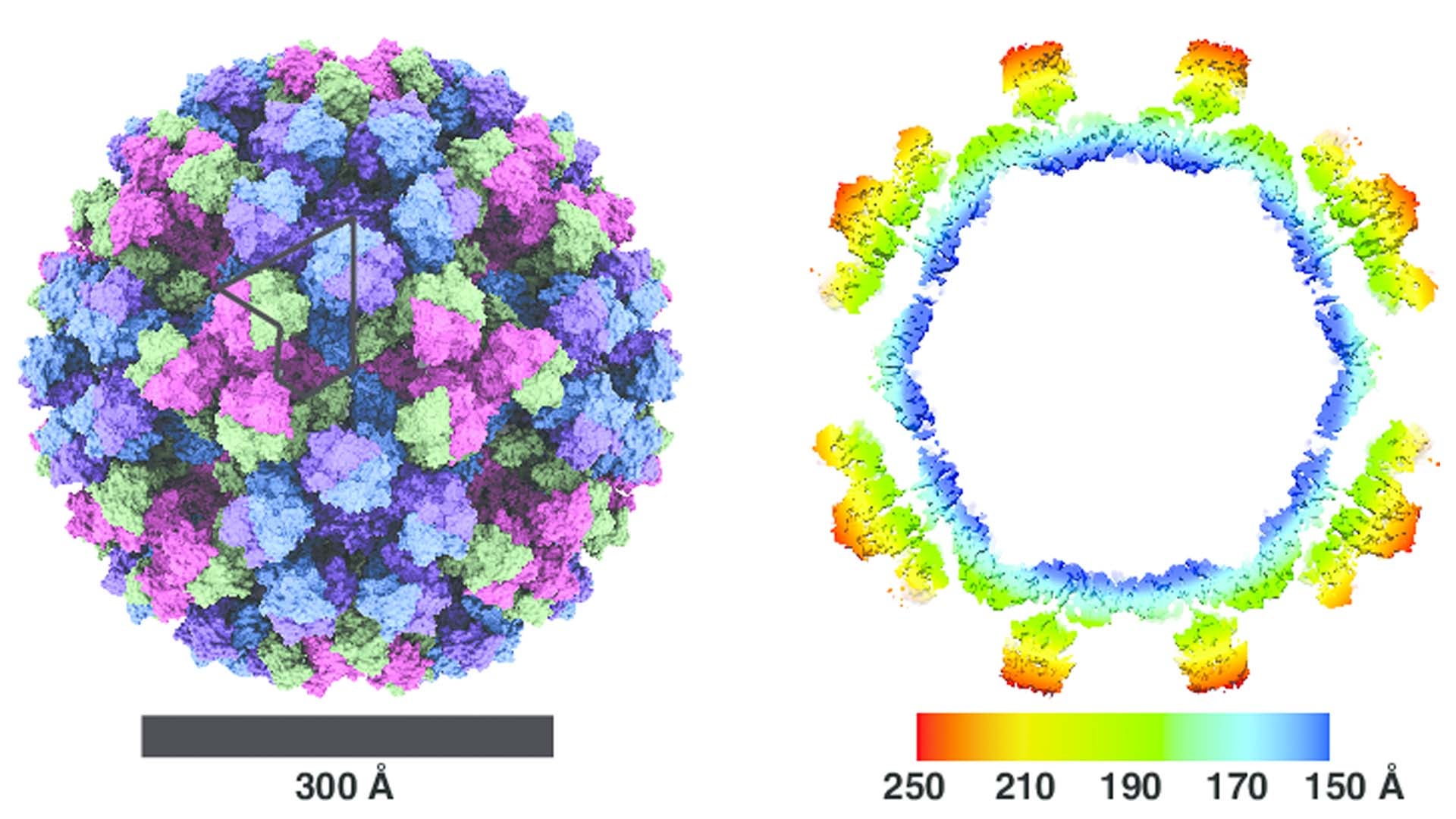 In cyro-electron microscopy, the sample is flash-frozen in liquid ethane, preserving its living shape. Then it is imaged thousands of times from different directions, illuminated by a gentle, low-energy beam of electrons. Finally, the snapshots are combined into a single, ultra-detailed 3D view. Pictured are images produced with the cryo-electron microscope technology, showing the strain of norovirus (GII.4 Minerva) at near atomic level.

A pervasive, pernicious virus has evaded vaccine developers for decades. By getting a clear look at its protective shell, they might finally know how to defeat it.

If you’ve ever experienced an illness that you vaguely called “stomach flu” or “food poisoning,” you’ve probably come face to face (or, perhaps more accurately, face to toilet) with norovirus. Infections by this ubiquitous virus aren’t just gross and painful; they’re a significant global health burden. The World Health Organization estimates that every year there are 685 million norovirus cases, resulting in more than 210,000 deaths—mostly among young children in lower-income countries.

At present, there are no medications that can flush the norovirus from a person’s system, and there are no vaccines to prevent infections. The situation might soon change, however. “I think that, over the next decade, we’re going to see big advances in this field,” says Morgan Herod, a virologist with the University of Leeds in the UK.

The reason for his optimism is that scientists finally have a clear picture of what they’re fighting against. Efforts to image the norovirus began with crude electron-microscope snapshots taken way back in 1972 by a team at the National Institutes of Health, but progress came slowly. Then last year, structural biologists Leemor Joshua-Tor and James Jung from Cold Spring Harbor Laboratory in New York deployed a powerful technique called cryo-electron microscopy. At long last, the norovirus snapped into focus.

Those new images are helping to crack open the central mystery of the norovirus: its baffling and frightening skill at eluding the human immune system. After most infections, the body remains resistant for years or even for a lifetime, pumping out targeted molecules called antibodies if the germ reappears. But in the case of norovirus, people can become susceptible to reinfection by the exact same strain in as little as six months. Something about this particular virus tricks the body into pumping out antibodies that don’t actually provide protection.

The explanation, Joshua-Tor and Jung are finding, is written plainly on the surface of the norovirus, carved right into its outer protein shell. There was just no way to see it until now.

Several different lines of research had to meld together to make this breakthrough possible. The first challenge was simply getting a usable sample of the norovirus. High-resolution visualization methods require lots of purified virus—amounts that can only come from mass production in laboratories—and the stubborn little pathogen had resisted every effort to culture it in the lab.

Luckily, that terrible track record didn’t discourage microbiologist Christiane Wobus. Over more than a decade, she honed novel techniques for growing the stubborn viruses, first as a postdoc at Washington University School of Medicine in Saint Louis, then as a researcher at the University of Michigan. Her effort paid off in 2016, when Wobus and an international group of collaborators announced the first successful culturing of a human norovirus.

In the meantime, other researchers had mapped the norovirus’s genome using the data-sifting methods known as quantitative biology, finding that it belongs to a large, diverse, highly infectious group of viruses that mutate rapidly. A recent analysis of the proteins in the virus determined that they are similarly eclectic and dynamic. That is a significant result, says Herod, because the targeting of the immune system targeting “is a shape-based thing.” For a vaccine to be effective, it has to closely match the shape of some part of an infectious virus.

People can become susceptible to reinfection by the exact same norovirus strain in as little as six months.”

Then Joshua-Tor and Jung put the full picture together. By using cryo-electron microscopy, they were able to bypass the limitations of older imaging, which required samples to be crystalized or placed in a vacuum. Such preparation tended to destroy delicate biological molecules. In cyro-electron microscopy, the sample is flash-frozen in liquid ethane, preserving its living shape. Then it is imaged thousands of times from different directions, illuminated by a gentle, low-energy beam of electrons. Finally, the snapshots are combined into a single, ultra-detailed 3D view. This technique is so powerful that it earned its inventors the 2017 Nobel Prize in chemistry.

When Joshua-Tor and Jung examined several strains of human norovirus this way, they observed that its structural diversity is even more extreme than anyone had expected. The size and organization of the protein shell varies tremendously from one norovirus to another. Some shells contain just 60 protein blocks, while others have as many as 240. Even noroviruses that are similar in size can have remarkably different arrangements.

Adding to that insight, Herod and his colleagues have found that the protruding parts of the of noroviruses in mice can undergo large-scale reorganizations in response to stimuli like a drop in temperature. “What’s in their virus capsules is—even compared to other viruses—really dynamic, really mobile, and really flexible,” he says. “You’ve got massive changes, whole proteins shifting out of the way.” He infers that many of the norovirus’s shapes are decoys, designed to draw the immune response away from the real target.

Medical researchers can now look for ways to separate the decoys from the real deals—the genuine structures that will spur our immune systems to produce norovirus-neutralizing antibodies. We may not have to wait long, Herod says: “With the momentum behind this type of work, and number of people looking at it, I think we’re pretty close.”

The CSHL School of Biological Sciences awarded Ph.D. degrees to seven students this year, who describe some of their experiences.   Read more »