Cold Spring Harbor, NY — As genetically identical cells (such as those in an embryo) multiply, different sets of genes are switched on, and others off, giving rise to cells and tissues with distinctive properties (e.g. liver versus muscle). Such differential gene expression is determined in part by the large-scale architecture or chromatin structure of DNA. “Silent” regions of DNA are tightly packaged into forms of chromatin that are less accessible to transcriptional activators, the proteins that switch genes on. Active regions of DNA adopt alternate chromatin structures that are generally more accessible to transcriptional activators.

Now, Bruce Stillman and his colleagues at Cold Spring Harbor Laboratory have demonstrated how a set of proteins work in concert to duplicate both the basic sequence of DNA as well as silenced states of chromatin structure. The findings, published tomorrow in Nature, provide the first detailed mechanism to explain how both DNA sequences and their associated states of gene expression are coordinately passed on to future generations of cells.

In 1989, Stillman and his colleague Susan Smith (now at New York University Medical School) purified a human protein called chromatin assembly factor-1 (CAF-1). They showed that in a test tube, CAF-1 could wrap newly-synthesized DNA around chromosomal proteins called histones, forming “beads on a string.” Such structures are the first level of higher-order chromatin structure beyond naked DNA. “Beads on a string” (nucleosomes) can be wrapped into still higher orders of chromatin structure, ultimately yielding tightly compacted chromosomal domains that are transcriptionally silent. 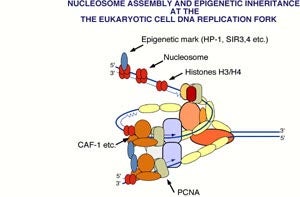 Consistent with CAF-1’s ability to assemble chromatin in cell free systems, Stillman and his colleagues subsequently found that CAF-1 is required for the inheritance of silenced domains of DNA in an intact organism (yeast). Both humans and yeast, and indeed all complex organisms, contain related genes that encode CAF-1 proteins.

In a study published last year, Stillman and Kei-ichi Shibahara discovered that PCNA (proliferating cell nuclear antigen)—a protein that plays an essential role as a “sliding clamp” for polymerase during DNA replication—could remain attached to DNA after replication and serve to mark the DNA for assembly into chromatin by CAF-1 (Note the donut shape of PCNA in the attached figure and the hole through which DNA passes as PCNA slides along). The Cold Spring Harbor researchers also found that PCNA physically interacts with CAF-1, and that the two proteins are located together at sites of DNA replication in the cell nucleus. Collectively, these results raised the tantalizing possibility that like CAF-1, PCNA was directly involved in establishing silenced chromosomal domains.

The new study by Stillman, Shibahara, and Zhiguo Zhang provides compelling evidence that PCNA and CAF-1 work together to generate stably inherited silent states of chromatin structure. In it, the scientists tested the effect of several mutations in the PCNA gene, POL30, on the heritable transcriptional silencing that occurs at the telomeres and the mating-type loci in yeast. They found that six different pol30 mutant alleles reduced silencing at these chromosomal locations. Thus, Stillman and his colleagues have established that in addition to its well-known role as a sliding polymerase clamp during DNA replication, PCNA is also involved, along with CAF-1, in the assembly of silenced chromosomal domains (see attached figure depicting DNA replication fork). Zhang, Shibahara, and Stillman propose that the involvement of PCNA in two fundamental processes, DNA replication and silencing, ensures that both DNA sequences and their associated states of gene expression are inherited by future generations of cells.

The establishment and stable inheritance of silenced chromatin is undoubtedly important to many aspects of normal cell physiology and development, and it may also be relevant to the onset of disease. For example, such inheritance may serve as a form of genetic memory (or a mechanism to propagate complex patterns of gene expression) that enables liver cells to beget liver cells, brain cells to beget brain cells (and so on) as part of the normal development of an organism. However, if genes are inappropriately switched off through their incorporation into a silenced chromatin domain, many types of pathological conditions, including cancer, might result.