High-resolution comparison of methylation ‘bookmarks’ across species and individuals

Cold Spring Harbor, NY — Scientists at Cold Spring Harbor Laboratory (CSHL) and the University of Southern California (USC) today published the first quantitative evidence supporting the notion that the genome-wide “bookmarking” of DNA with methyl molecules—a process called methylation—and the underlying DNA sequences corresponding with these marks, have co-evolved in a kind of molecular slow-dance over the 6 million years since humans and chimps diverged from a common ancestor.

The team’s findings in some ways defy the conventional understanding of how methylation and related processes work. Broadly known as epigenetic processes, methylation and other means by which the genome is “marked” are usually thought of as altering the way a gene is expressed (i.e., whether it is “on” or “off”) without changing the underlying sequence of DNA letters—As, Gs, Cs and Ts—that “spell out” the gene. 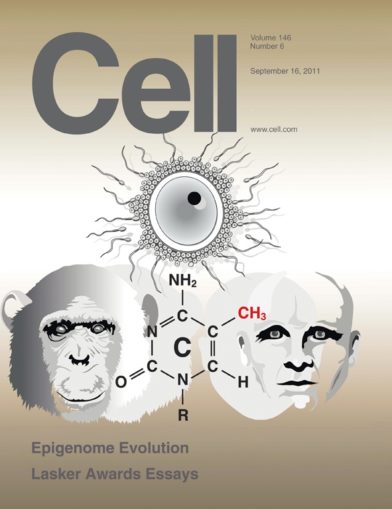 Yet the new research supports theories proposing that methylation changes could drive changes in DNA sequence. The CSHL-USC team specifically suggests that methylation changes, which are reversible, might allow a short-term “flexibility in phenotype”—characteristics that individuals within a species exhibit—that would be a kind of dry run for more permanent genomic changes, if a newly conferred trait proves advantageous.

“This part of our data shows how it is possible for methylation to serve as an agent of evolution,” says the co-leader of the research team, Dr. Gregory Hannon, a CSHL Professor and an Investigator of the Howard Hughes Medical Institute. The second team leader is Dr. Andrew Smith, a USC Professor and lab head, who began the project with Hannon while doing postdoctoral research at CSHL several years ago.

The evolutionary insight about methylation is only one of a number of new perspectives that emerge from the team’s research paper, which is the cover story in the September 16 issue of the journal Cell. Its publication coincides with advance publication of a sister paper in Molecular Cell by the same team, whose members also include CSHL Professor W. Richard McCombie and co-first authors of the paper, CSHL postdoc Dr. Emily Hodges and doctoral student Antoine Molaro. Hodges is first author of the companion paper, which shows how methylation changes in human blood stem cells are involved in “cell-fate decisions” that help determine how the precursor cells differentiate into mature lineage-specific blood cells.

Cells are reprogrammed in two waves

The project set out to explore one of the most fascinating phenomena in all of biology. Twice in the lives of mammalian cells, DNA is wiped completely clean of epigenetic markings and then reprogrammed. The purpose of this process of erasure and reinscription is still rather mysterious. Only once before has the full set of methyl marks—called the “methylome”—been sequenced in humans with single-nucleotide resolution on a genome-wide basis. The new work sets those results in comparative perspective with the methylomes of another class of cells in humans and chimps, by looking for patterns of similarities and differences.

Each of the two cell types studied represents the “output” of one of the two reprogramming waves. One type was human embryonic stem (ES) cells; this cell type is the progenitor of all so-called “somatic” cells, i.e., cells that “differentiate” into all the tissues and organs of an organism. The methylome of the ES cells used in the current study was generated in a previous study. It is used in the current study for comparative purposes, specifically, to form a comparison with male germs cells sampled from two humans and from two chimpanzees, man’s closest evolutionary relative.

“These two cell types, the human ES cell and the human and chimp male germ cell, represent the output of the two re-programming waves, and as such are the basis or ‘ground state’ for all that will follow, over the life of the individual cell and the organism itself,” explains Molaro. “The ES cells subsequently differentiate into lung, blood, heart, liver, brain cells, etc. The germ cells are of course fundamental to sexual reproduction.”

Methylation in different cell types vs. within types across species

It has long been known that methylation marks are among the most important factors in determining how a given cell will develop within a given organism and how it will behave once mature. For instance, it is believed that methylation has a great deal to do with how a given stem-like precursor cell “knows” which genes to switch on in order to become a liver cell and not a heart cell, or a brain cell and not a lung cell.

The current study provides the first quantitative evidence of a remarkable fact: the methylation patterns that characterize each class of human or chimp cells—heart, blood, liver, etc.—are far more different from one another than are the patterns within each cell type when viewed across species. A chimp heart cell will share most of its methylation marks with a human heart cell; but the chimp heart cell’s methylation patterns will share comparatively fewer points of commonality when compared with those seen in a chimp’s liver cells.

This fact lends quantitative support to the known fact that methylation helps define cell types. But this and other evidence in the research also says something that until now has been purely speculative: by looking very closely at methylation patterns within individuals and across species, one can begin to piece together previously hidden stories about how species grew apart via evolution.

Humans and chimps diverged from their common ancestor about 6 million years ago. That is a very short period on the timescale of evolution, which on our planet began at the point nearly 4 billion years ago when the first self-replicating cells appeared.

The default state for both genomes, chimp and human, is for a given spot capable of methylation to in fact be methylated, according to Hannon. Methylation, when it occurs, involves a chemical process at positions across the genome where a cytosine base is followed by a guanine base—so called CpG sequences. Methyl groups (CH3) attach to the cytosine in such sequences, and do so between 70% and 80% of the time, across both chimp and human genomes.

Comparison of non-methylated regions, across species

The CSHL-USC team derived its most important information based on a close analysis of clusters of CpG sequences in which methylation does not occur. Successive unmethylated CpGs form what are called hypomethylated regions, or HMRs. The team found these to be structurally different in ES cells and sperm cells, within species, and continue to seek an explanation.

HMRs have long been of interest because the DNA sequences of most of the 21,000 human genes are associated with HMRs. Therefore, HMRs—areas without methyl marks—have been used as a rough guide to where genes lie in the vast DNA landscape that is the genome, 98% of which does not consist of genes.

More specifically, most HMRs overlap with the very beginning portions of gene sequences in humans and chimps—places called promoters. This fact is of evolutionary import: places in the genome where genes are regulated tend to be unmethylated. This is the flip side of a fact that has long been known: methylation tends to block gene expression. One way is by blocking access of the cell’s transcriptional machinery at promoter sites.

Hannon, Smith and colleagues propose methylation is a potential agent of evolution by applying sophisticated analytic algorithms to small changes in the human vs. chimp methylomes. They cite, in one of several examples, a gene called HTR3E, which encodes a structural unit of a serotonin-receptor protein that is expressed in cells of the nervous system. The gene is found in humans and chimps. But at the site of its promoter, the methylation pattern differs: in humans, the promoter is not methylated and in chimps it is methylated.

The functional significance of this difference cannot be determined on the basis of this information alone. The data is important, however, as one example among many where differences in methylation status between closely related species may provide clues about how adaptive pressure acted differently upon each. A broadening of the work done by the CSHL-USC team to include other species will be needed, says Hannon, in order to shed further and more definitive light on the mutual interactions of genome and epigenome in evolution, over the short and long term.

This work was supported by grants from the National Institutes of Health and by a kind gift from Kathryn W. Davis.