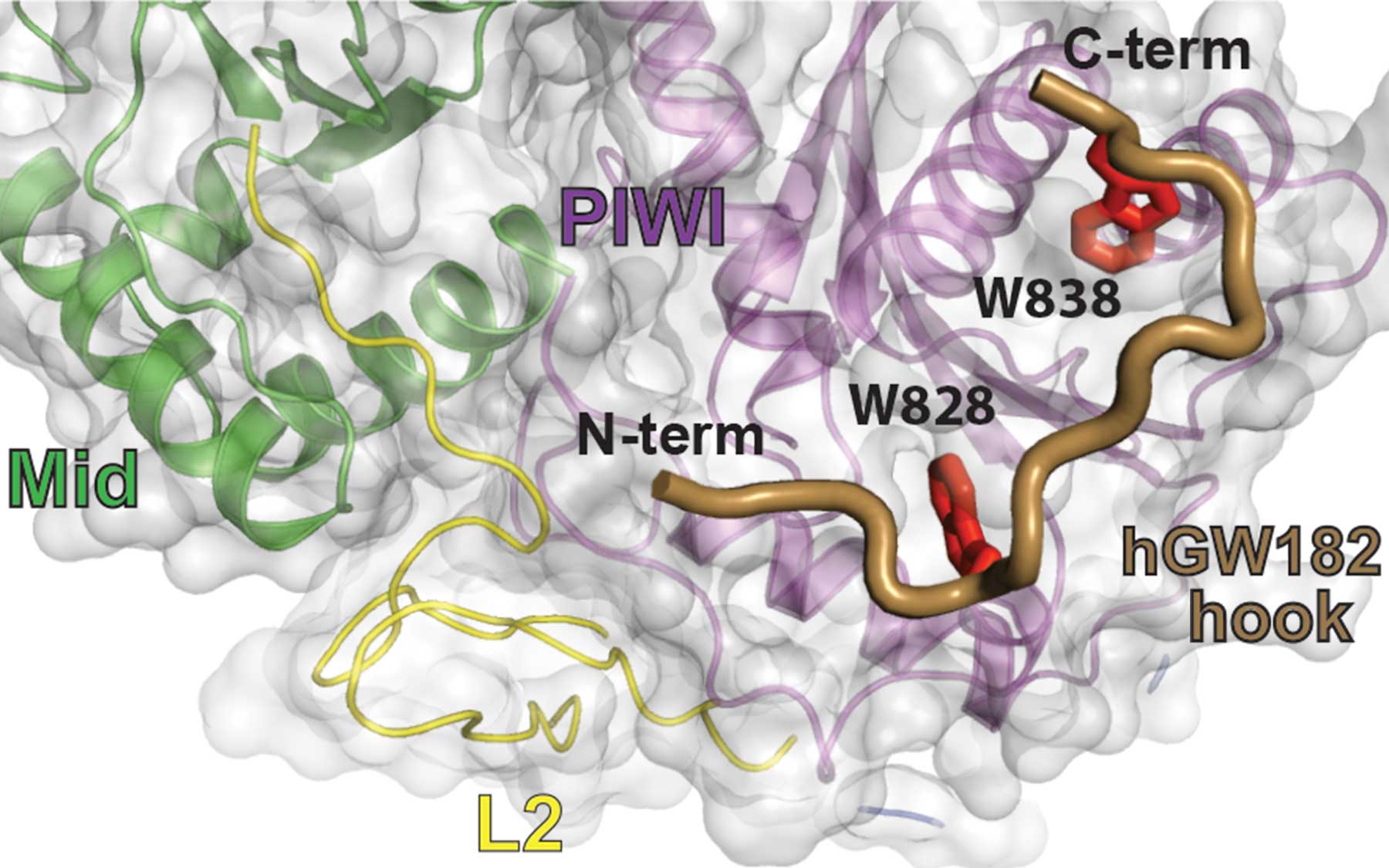 Scientists have obtained atomic-resolution pictures and made a comprehensive analysis of the workings of a part of the RNAi machinery. Humans could not survive without RNAi; we depend it to fine-tune the expression of our genes.

Cold Spring Harbor, NY — Continuously throughout our lives, our cells are expressing genes. It’s the first step in making proteins, the stuff of all the structures in the body and molecular players in the countless dramas unfolding every second as cells execute tasks that enable our organs to function.

Many specialized and overlapping mechanisms have evolved to assure that genes are active only when they should be. One of the most important wasn’t even known to science until the late 1990s. Called RNA interference, or RNAi, it is present across the spectrum of life, from single-celled organisms to the most advanced primates. Like other creatures, we humans depend on RNAi to fine-tune the expression of our genes. We could not survive without it.

Today in Molecular Cell, a team led by structural biologist Leemor Joshua-Tor, an HHMI Investigator and professor at Cold Spring Harbor Laboratory (CSHL), publishes atomic-resolution pictures and a comprehensive analysis of the workings of a part of the RNAi machinery. Although much is already known about this machinery, important mysteries about its function have remained unsolved.

The primary component of the RNAi machinery is called RISC—the RNA-induced silencing complex. It contains two essential parts, a small RNA molecule called a microRNA (miRNA) which guides RISC to its mRNA target; and a much larger component into which the guide RNA fits, a protein called Argonaute, which, Joshua-Tor showed in 2004, actually performs the “slicing up” of the mRNA.

The new discoveries pertain to the way several parts of the machinery come together and work in concert to tamp down gene expression. They can do this in various ways, but the new pictures are about one way in particular: events occurring after the attachment of the machinery to an RNA message (mRNA) copied from a gene. This association of the RNAi machinery and a gene’s message is a prelude to destruction of the message before it arrives at a cellular protein factory called the ribosome. When the machinery works properly in this mode, the protein never gets made.

Now Joshua-Tor’s team has succeeded in showing how in humans, a protein called GW182 physically associates with RISC. It was known that there are three possible binding sites on GW182 for Argonaute. An atomic-level view of one, called a hook motif, reveals a gate-like interaction. The pictures show that human Argonaute has a single binding site for GW182, and that binding of the guide sequence increases the affinity of the Argonaute and GW182.

Showing that human GW182 can “multivalently” recruit up to three copies of Argonaute at once, experimenters in the lab led by first author Elad Elkayam suggest a possible source of synergy. “There may be greater efficiency in destroying the mRNA target, we speculate, because of ‘crosstalk’ between the RISC complexes and GW182,” Joshua-Tor says.

Scientists have obtained atomic-resolution pictures and made a comprehensive analysis of the workings of a part of the RNAi machinery. Humans could not survive without RNAi; we depend it to fine-tune the expression of our genes.

A CSHL faculty member since 1995, a professor since 2005, Joshua-Tor is among the most distinguished members of the Laboratory community.   Read more »