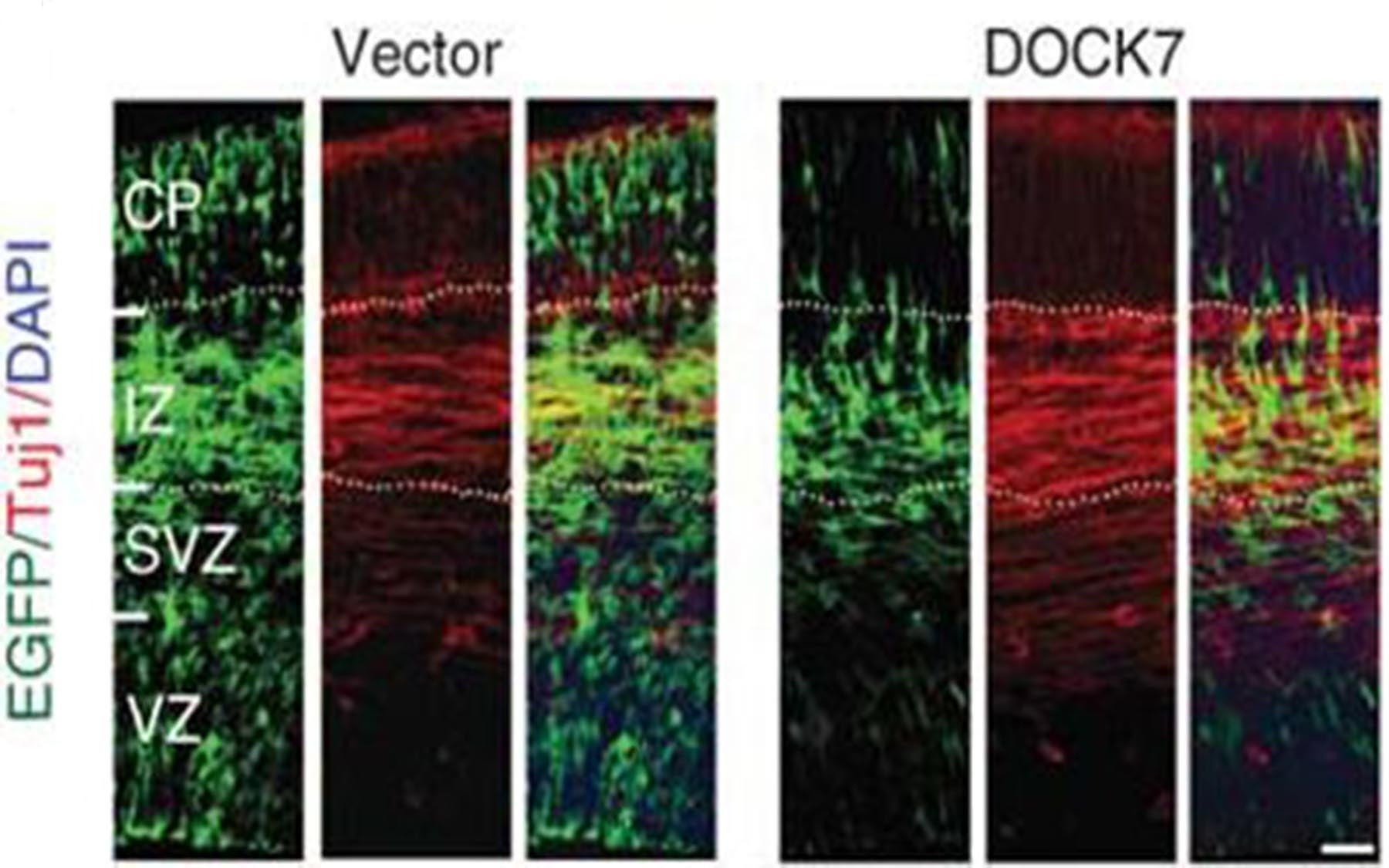 Cold Spring Harbor, NY — Researchers at Cold Spring Harbor Laboratory (CSHL) have solved an important piece of one of neuroscience’s outstanding puzzles: how progenitor cells in the developing mammalian brain reproduce themselves while also giving birth to neurons that will populate the emerging cerebral cortex, the seat of cognition and executive function in the mature brain.

CSHL Professor Linda Van Aelst, Ph.D., and colleagues set out to solve a particular mystery concerning radial glial cells, or RGCs, which are progenitors of pyramidal neurons, the most common type of excitatory nerve cell in the mature mammalian cortex.

In genetically manipulated mice, Van Aelst’s team demonstrated that a protein called DOCK7 plays a central regulatory role in the process that determines how and when an RGC “decides” either to proliferate, i.e., make more progenitor cells like itself, or give rise to cells that will mature, or “differentiate,” into pyramidal neurons. The findings are reported in the September 2012 issue of Nature Neuroscience.

DOCK7 was already known to be highly expressed in various parts of the developing rodent brain, including the hippocampus and cortex. It had been shown by Van Aelst and colleagues to control the formation of axons—wiring that connects neurons.

In their newly published research, Van Aelst, along with Drs. Yu-Ting Yang and Chia-Lin Wang, a graduate student and postdoctoral fellow, respectively, in the Van Aelst lab, elucidate DOCK7’s regulatory role in experiments in which the protein was alternately silenced and overexpressed.

When the protein was silenced in mouse embryos, neuronal differentiation was impeded; RGCs remained in their progenitor state. When DOCK7 was overexpressed, RGCs differentiated prematurely, resulting in more neurons and fewer RGCs.

These and related experiments revealed the mechanism through which DOCK7 expression affects the two essential but contrasting functions of RGCs. “Self-renewability of RGCs must be tightly balanced with differentiation for proper cortical development,” says Van Aelst.

“The mechanism we discovered to be central in the determination of RGC fate is called interkinetic nuclear migration, or INM,” she continues, “and you can see it in action in the movies made by Drs. Wang and Yang.” [view movies here]

It is DOCK7 that regulates this movement; in particular, the movement from the basal to apical location, the CSHL team has now demonstrated. On what appears to be the lower surface of the VZ, the apical surface, signals directing the RCG toward proliferation—i.e., reproduction of other RGCs—are dominant. On the upper or ‘basal’ side of the VZ, dominant signals coax the RGC to split into new intermediate progenitors or neurons.

As Dr. Yang points out, DOCK7 acts by antagonizing the microtubule growth-promoting function of TACC3.  Silencing of DOCK7 accelerates the movement of RGC nuclei from the basal to apical side of the VZ, resulting in extended apical residency of RGC nuclei and apical mitoses that lead to an increase in RGCs and a reduction in neurons. DOCK7 overexpression, on the other hand, leads to extended residence of RGC nuclei at basal locations and mitoses away from the apical surface, where the production of new neurons increases, at the expense of the proliferation of more progenitors.

Beyond elucidating an important mechanism of cortical development, the new research may shed light on pathologies seen in microcephaly, a condition marked by an abnormally small brain size, as well as neurodevelopment disorders such as schizophrenia. “If DOCK7 expression is abnormal, you perturb normal neurogenesis,” says Van Aelst. “In future work we hope to explore whether an imbalance in neurogenesis caused by DOCK7 aberrations is associated with a subsequent imbalance in cortical circuitry, and various known pathologies.”

“DOCK7 interacts with TACC3 to regulate interkinetic nuclear migration and cortical neurogenesis” appears in the September 2012 issue of Nature Neuroscience. The authors are: Yu-Ting Yang, Chia-Lin Wang and Linda Van Aelst. The paper can be obtained online at: http://www.nature.com/neuro/journal/v15/n9/full/nn.3171.html