Cold Spring Harbor, NY — “Although mortality from many cancers has been steadily falling, particularly those of the blood [i.e., leukemias], the more important statistic may be that so many epithelial cancers (carcinomas) and effectively all mesenchymal cancers (sarcomas) remain largely incurable.” 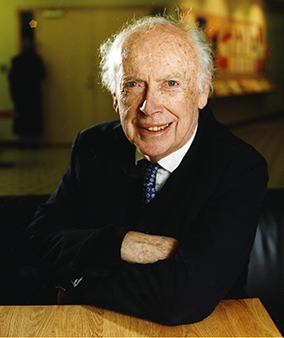 With these words as preface, Nobel laureate James D. Watson, Ph.D., in a newly published paper that he regards “among my most important work since the double helix,” sets forth a novel hypothesis regarding the role of oxidants and antioxidants in cancers that are currently incurable, notably in late-stage metastatic cancers.

At the heart of his thesis are the group of molecules that scientists call reactive oxygen species, or ROS. Noting their fundamental two-sidedness, Watson calls ROS “a positive force for life” because of their role in apoptosis—an internal program that highly stressed cells use to commit suicide. It’s one of the key mechanisms that have arisen through eons of evolution to weed out biological dysfunction that poses a threat to the survival of organisms. On the other hand, ROS are also well understood—indeed are notorious—“for their ability to irreversibly damage key proteins and nucleic acid molecules [e.g., DNA and RNA].”

When they’re not needed to curb wayward or out-of-control cells, which is to say under normal circumstances, ROS are constantly being neutralized by anti-oxidative proteins. We are often urged to eat foods rich in antioxidants such as blueberries; but, if Watson is correct about the role of ROS and antioxidants in late-stage cancer, as he writes in his new paper, “blueberries best be eaten because they taste good, not because their consumption will lead to less cancer.”

Understanding why this might be so—why antioxidants can in late-stage cancers actually promote cancer progression—is central to Watson’s paper, which appears online January 9 in Open Biology, a journal of Great Britain’s Royal Society.

He proposes that the cell-killing ability of currently used anti-cancer therapies—notably, toxic chemotherapeutic agents such as Taxol as well as radiation treatment—is mainly due to the action of ROS to induce apoptosis, or programmed cell death. If true, this would explain “why cancers that become resistant to chemotherapeutic control become equally resistant to ionizing radiotherapy.” The common feature would be their common dependence upon a ROS-mediated cell-killing mechanism.

Watson, who is Chancellor Emeritus of Cold Spring Harbor Laboratory, then takes up the case of cancer cells largely driven by mutant proteins such as RAS and MYC. These, he notes, are often hardest to get to respond to treatment. He suggests this could be due to their high levels of ROS-destroying antioxidants. He cites recent research showing up-regulation of a gene transcription factor called Nrf2 when cells proliferate as well as when oncogenes such as RAS, MYC and RAF are active. Nrf2 controls the synthesis of antioxidants, and “this makes sense because we want antioxidants present when DNA functions to make more of itself,” Watson writes.

In general, the Nobel laureate wants those reading his new paper to consider a proposition he considers grossly underexplored: “Unless we can find ways of reducing antioxidant levels, late-stage cancer 10 years from now will be as incurable as it is today.”