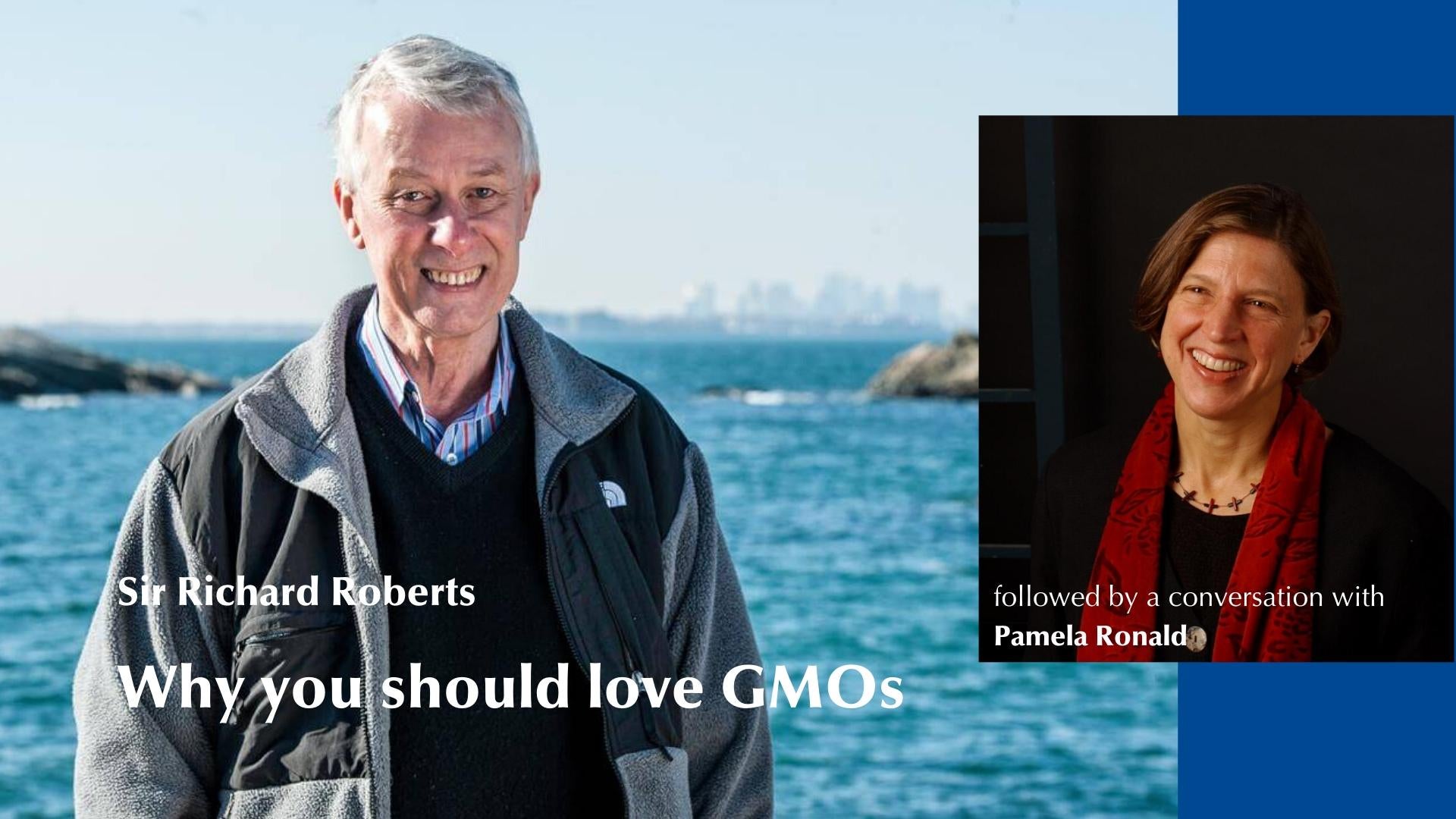 Cold Spring Harbor Laboratory's Center for Humanities and the History of Modern Biology invites you to join an online live discussion with Sir Richard Roberts.

When Monsanto first tried to introduce GMO seeds into Europe there was a backlash by the Green parties and their political allies, who feared that American agro-business was about to take over their food supply. Thus began a massive campaign not against the true target, Monsanto, but rather against the surrogate target, GMOs. This has had disastrous consequences for one of the most promising technologies ever developed for improving food supplies.

I will argue that by deliberately ignoring the science that underpins GMOs and painting horrific pictures of the dangers that might ensue, political motives are slowing the wide adoption of these technologies at the expense of the developing world.

I have organized a campaign of Nobel Laureates to try and influence the debate, which now has 155 co-signees. I will use Golden Rice as a clear example of the costs of these shortsighted policies. Millions of children have died or suffered developmental impairment because of a lack of Vitamin A in their diet. Golden Rice could reverse this, but has become a target of the Green parties because it is a GMO. This is foolish and dangerous. How many more children must die before this is considered a crime against humanity?

Sir Richard Roberts shared the Nobel Prize in Physiology or Medicine in 1993, with Phillip Sharp of MIT who started his career at Cold Spring Harbor Laboratory, for their discovery of split genes and RNA splicing, a fundamental process that differentiates eukaryotic and prokaryotic organisms.

Roberts received his Ph.D. and bachelor's degrees, both in chemistry, from the University of Sheffield. He did postdoctoral research at Harvard University before working at Cold Spring Harbor Laboratory in New York, and New England Biolabs in Massachusetts.

Richard J. Roberts is the Chief Scientific Officer at New England Biolabs, Ipswich, Massachusetts. He received a Ph.D. in Organic Chemistry in 1968 from Sheffield University and then moved as a postdoctoral fellow to Harvard. From 1972 to 1992, he worked at Cold Spring Harbor Laboratory, eventually becoming Assistant Director for Research under Dr. J.D. Watson. He began work on the newly discovered Type II restriction enzymes in 1972 and these enzymes have been a major research theme. Studies of transcription in Adenovirus-2 led to the discovery of split genes and mRNA splicing in 1977, for which he received the Nobel Prize in Medicine in 1993. During the sequencing of the Adenovirus-2 genome computational tools became essential and his laboratory pioneered the application of computers in this area. DNA methyltransferases, as components of restriction-modification systems are also of active interest and the first crystal structures for the HhaI methyltransferase led to the discovery of base flipping. Bioinformatic studies of microbial genomes to find new restriction systems are a major research focus as is the elucidation of DNA methyltransferase recognition sequences using SMRT sequencing and a new approach to m5C containing recognition sequences. Since winning the Nobel Prize, Dr. Roberts has been involved in organizing a number of Nobel initiatives to correct scientific misunderstandings and promote humanitarian causes. His most recent campaign has been on the issue of GMOs, where 155 Nobel Laureates have supported the use of GMO techniques to improve plant breeding practices that could greatly help the developing world.

Pamela Ronald completed her Ph.D. at UC Berkeley in 1990 and uses genetic techniques to understand the plant response to infection and tolerance to environmental stress. With her collaborators, she received the 2008 USDA National Research Initiative Discovery Award and the 2012 Tech Award for the innovative use of technology to benefit humanity. In 2015 Scientific American named her one of the 100 most influential people in biotechnology. Ronald’s book, Tomorrow’s Table: Organic farming, Genetics and the Future of Food was selected as one of a 25 most influential books with the power to inspire college readers to change the world. Her 2015 TED talk has been viewed by more than 1.8 million people and translated into 26 languages. In 2019, she received the American Society of Plant Biologists Leadership Award, an honorary doctorate from the Swedish Agricultural University and was elected to the National Academy of Sciences. She is currently Distinguished Professor in the Department of Plant Pathology and the Genome Center, as well as Director of the Institute for Food and Agricultural Literacy at UC Davis as well as Key Scientist at the Joint Bioenergy Institute and Faculty Affiliate at the Center on Food Security and the Environment at Stanford University.

Rob Martienssen joined the faculty at Cold Spring Harbor in 1989. His research focuses on epigenetic mechanisms that shape and regulate the genome, and their impact on development and inheritance, as well as transposable elements, which were first discovered by Barbara McClintock at CSHL. Dr. Martienssen’s work revealed a link between epigenetics and RNA interference that was named “#1 Breakthrough of the Year” by Science magazine for which he received the AAAS Newcomb Cleveland Award in 2003. Dr. Martienssen was made a Fellow of the Royal Society in 2006, and was appointed a Howard Hughes Medical Institute and Gordon and Betty Moore Foundation Investigator in Plant Biology in 2011, and a foreign member of EMBO in 2011. He is a co-founder of Orion Genomics LLC, a biotechnology company based in St Louis MO.