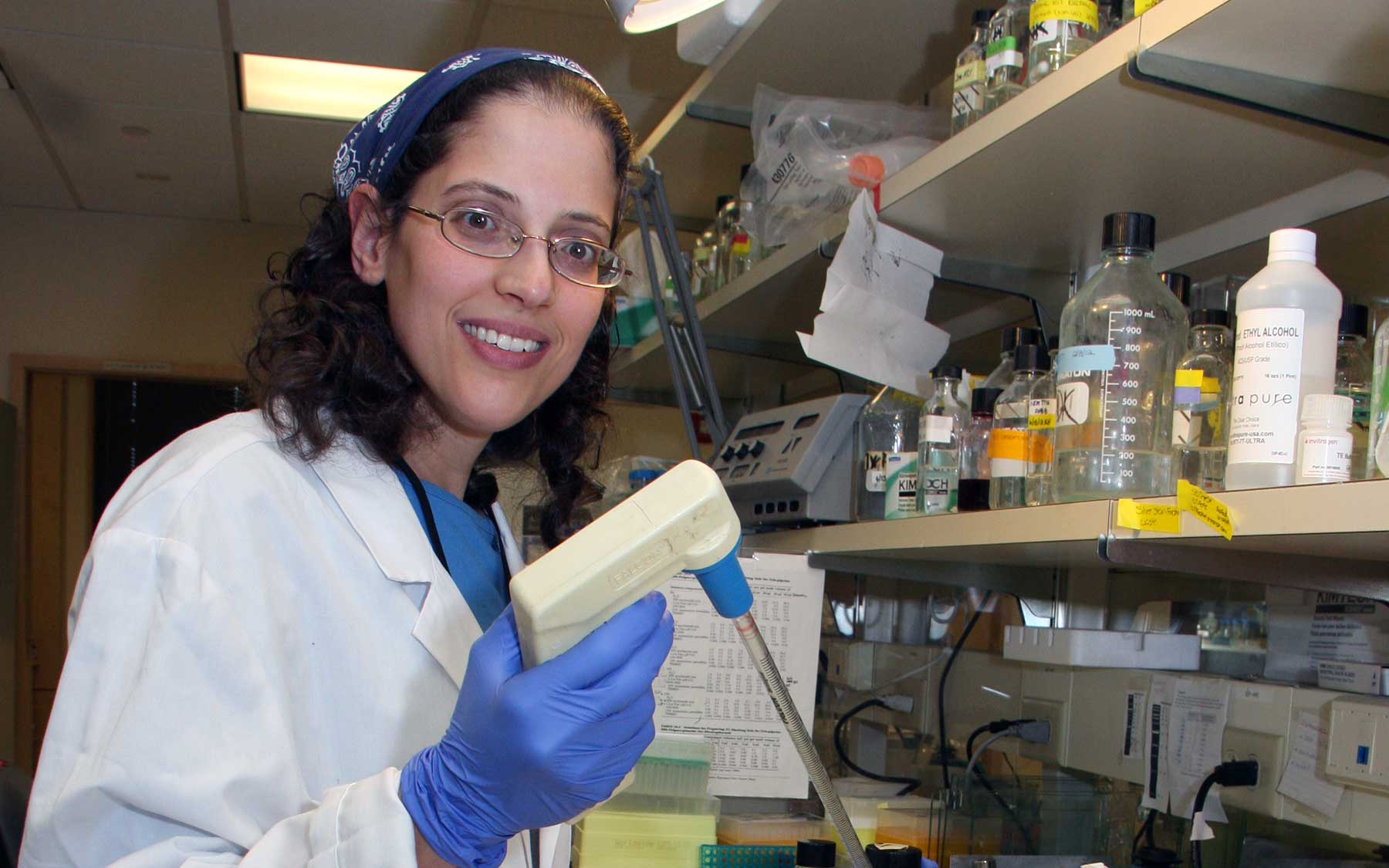 Dr. Jackie Novatt at bench in the lab of Professor Adrian Krainer.
email envelop icontwitter icon share buttonfacebook icon share buttonlinkedin icon share button
Science is not too hard for you to understand. That was Jackie Novatt’s attitude during every tour she gave at CSHL, where she herself was a researcher, and it showed. She wasn’t interested in merely dazzling visitors with high-tech equipment and triumphant success stories. She was determined to show the people on her tours how science really works, whether through a creative science analogy or a personal story of a failed experiment.

Novatt proclaims, “I firmly believe science doesn’t have to be hard and it doesn’t have to be scary.” Her story shows how that determination can pay off. She landed her dream job because of a tour she led, which became a kind of impromptu interview with the dean of Long Island University’s College of Pharmacy. He was blown away by her ability to make science accessible.

This would have been even more improbable if the tour was completely scripted and impersonal. But that isn’t how it works at CSHL. Scientists themselves volunteer their free time to lead tours because they want to show the public their world. And with the number of science journalists shrinking—according to Pew Research Center, only 2% of news coverage between 2007 and 2012 focused on science and technology—the need for scientists to connect with the public directly is growing. This year’s campus tours will start up again on March 18, and you can sign up here.

The tour that changed Novatt’s life happened on Father’s Day Sunday in 2016. She invited her parents along because of the holiday, but it fit with her approach to leading tours. “I made a point on my tours to tell people that I was a mom, that I play cello, that I do theater, that I work at my synagogue, and I’m a human as well as a scientist,” Novatt says.

Being human also means failing sometimes. “I found it important to tell people about the failed experiments too,” says Novatt, “because that’s not something that you hear a lot about,” yet it’s a huge part of life for even the most successful scientists. Novatt explains that it’s taking scientists so long to cure cancer, for example, because “it’s really complicated and a lot of experiments fail.” But she’s mindful of how the media presents science, and sees how misconceptions can arise “if we only communicate that A leads to B leads to C leads to this beautiful conclusion.”

Her experiences in her own lab gave her plenty of stories of failed experiments, but it also gave her a truly amazing science success story. She was part of Professor Adrian Krainer’s lab, where some of her colleagues had done research that led to the development of the first-ever treatment for spinal muscular atrophy, or SMA, long known as the leading genetic cause of death among infants. Children who were expected to weaken until they could no longer even breathe on their own were instead learning to walk after receiving the drug.

On that fateful Father’s Day, Novatt explained what causes SMA and how the drug addresses this, just as she normally would. The problem is with a process called RNA splicing, which is the focus of all of the work in Krainer Lab. She compares this complex genetic phenomenon to editing a word in different ways. During RNA splicing, the information in genes gets rearranged and repurposed in a way that’s like editing a word. She liked to use “cataloging” as an example. Chop off the “ing” and you get a related word, “catalog.” Or, “keep chopping and you get ‘cat,’ which is a furry animal with whiskers that makes me sneeze,” she adds with a laugh. But in SMA, the editing process of RNA splicing yields a nonsense word, in the same way you can get “logi” from “cataloging” if you cut in the right spots.

It’s explanations like these that caught the attention of the LIU Pharmacy dean. At the end of the tour, he was “just kind of hovering” as people made their way to their cars, Novatt remembers. When she asked if he had questions, his response was, “yes, are you interested in a teaching job?”

Today, Novatt is not only teaching as an assistant professor at LIU Pharmacy, but teaching a program that she designed. “I had this dream to be a lab professor collaborating with a real research lab, where instead of doing random experiments to throw them away, my students would learn laboratory techniques while doing something to contribute to an actual ongoing research project,” she explains. Now, that is exactly what she’s doing.

Students in her course learn important techniques as they purify a particular protein that a research lab at the school needs in order to study HIV. Just like in the real world of science, the experiments don’t always work. But there are more than enough successes to make the endeavor worthwhile.

The promising drug duo that may improve SMA treatment

Pairing Spinraza® with a second FDA-approved drug may be a new way to improve the drug’s therapeutic effects in spinal muscular atrophy patients.   Read more »