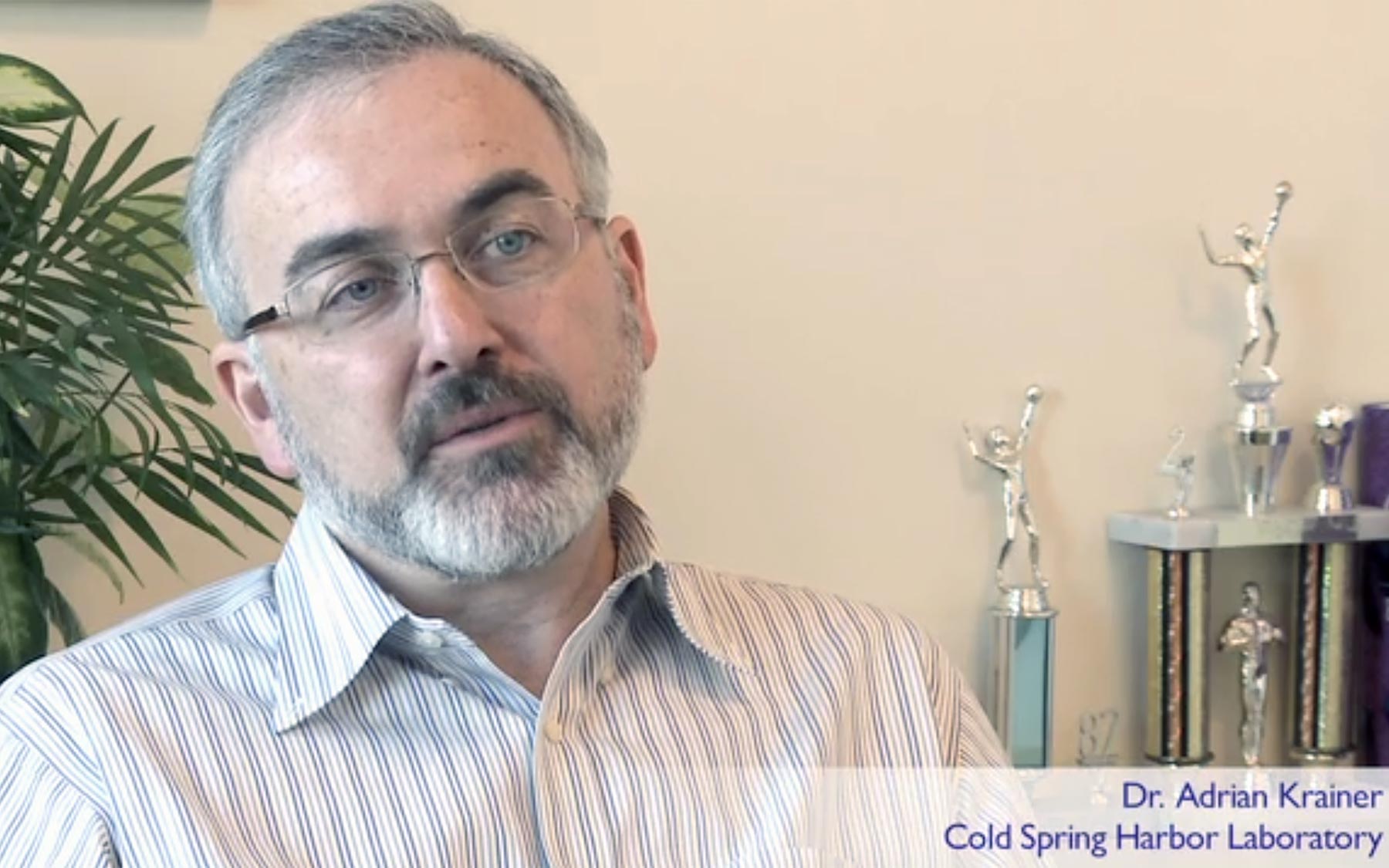 email envelop icontwitter icon share buttonfacebook icon share buttonlinkedin icon share button
Cancer cells are a hotbed of mixed or incorrect molecular “messages”—a result of defects in a cellular mechanism called RNA splicing. When a cell’s DNA is copied into an intermediary molecule called RNA, splicing is the editing step that removes unwanted bits of the RNA message while pasting the rest, called exons, together. The edited message, or messenger RNA, is then translated into protein.

Much of the time though, some of the exons get left out or spliced back together in alternative ways. The resulting message, called a splice variant, produces a different protein. CSHL Professor and splicing expert Adrian Krainer explains this editing variation, called alternative splicing, and its consequences in this short video.

Research teams led by Krainer have discovered many of the core principles of alternative splicing. In collaboration with a pharmaceutical company, Krainer and his team recently also invented a way (pdf) to fix the faulty splicing that causes a devastating disease called spinal muscular atrophy. That molecular fix is now being tested in early clinical trials.

The variant proteins generated by alternative splicing could be useful, but they could, alternatively, turn out to have dangerous properties and functions—for example, blocking cell death, a hallmark of cancer. “There is a lot of abnormal RNA splicing in cancer cells,” says Krainer. “We and others in the field have been trying to sort out which of these changes are causal and which are consequences of cancer.”

Splicing errors can, in part, stem from changes in the levels of proteins that regulate splicing, called splicing factors, more than 200 of which are known. By identifying splicing factors involved in cancer, their specific targets, their regulators, and ways of manipulating them, Krainer and his team of splicing sleuths hope to contribute to the development of new cancer therapies.

Dr. Olga Anczuków, a postdoctoral researcher in the Krainer lab, has been particularly interested in SRSF1, a splicing factor that was the first to be shown to have oncogenic properties by Krainer’s team five years ago. Several studies have found that SRSF1 is present at higher-than-normal levels in breast and lung cancer.

The question that Anczuków wanted to answer was whether SRSF1 can, on its own, initiate cancer in mammary cells and maintain the growth of breast tumors. At the same time, Shipra Das, a graduate student in Krainer’s group, set off on an equally important quest: to identify the mechanisms that boost SRSF1 production in cancer cells in the first place. Both questions have now been answered, at least in part, in two just-published studies.

Anczuków has found that cells that produce abnormally high levels of SRSF1 trigger the formation of mammary tumors when injected into mice or when grown in a three-dimensional cell-culture system that mimics the way mammary cells grow in the breast. “SRSF1 over-production boosted cell proliferation and delayed cell death,” says Anczuków, who traced these changes to their molecular origins. “We found that having too much SRSF1 resulted in the alternative splicing of two genes that normally promote cell death. The change in splicing produced protein variants that couldn’t perform this function,” she explains.

Another set of experiments involving a large collection of patient tumor biopsies has revealed further critical information that could impact the way oncologists predict breast cancer outcome. SRSF1, these studies show, cooperates with another potent cancer-causing gene called MYC in breast cancer progression. The researchers have found that grade III tumors, which have a poor prognosis, are more likely to overexpress both genes as opposed to grade I tumors, which are more likely to overexpress just one of them.

This correlation between SRSF1 and MYC gene expression and protein levels has also turned up in Das’s set of experiments involving a large collection of lung tumor biopsies. The MYC gene, a key player that is mutated in more than 50% of cancers, appears to directly control SRSF1. “The MYC protein directly switches on the SRSF1 gene, and the resulting increase in SRSF1 protein alters the splicing of a number of other genes, all of which contributes to cancer progression” explains Das.

“It’s now clear that the misregulation of alternative splicing can contribute to malignancy by regulating the expression of cancer genes or their targets,” says Krainer. The ultimate goal for him is to find a way to block these regulatory mistakes, forcing cancer cells to lose their undesirable characteristics and revert to normalcy. “Das’s study, which shows that partially blocking SRSF1 can reduce MYC-mediated transformation of normal cells into cancer cells, is a promising start toward this goal,” Krainer says.