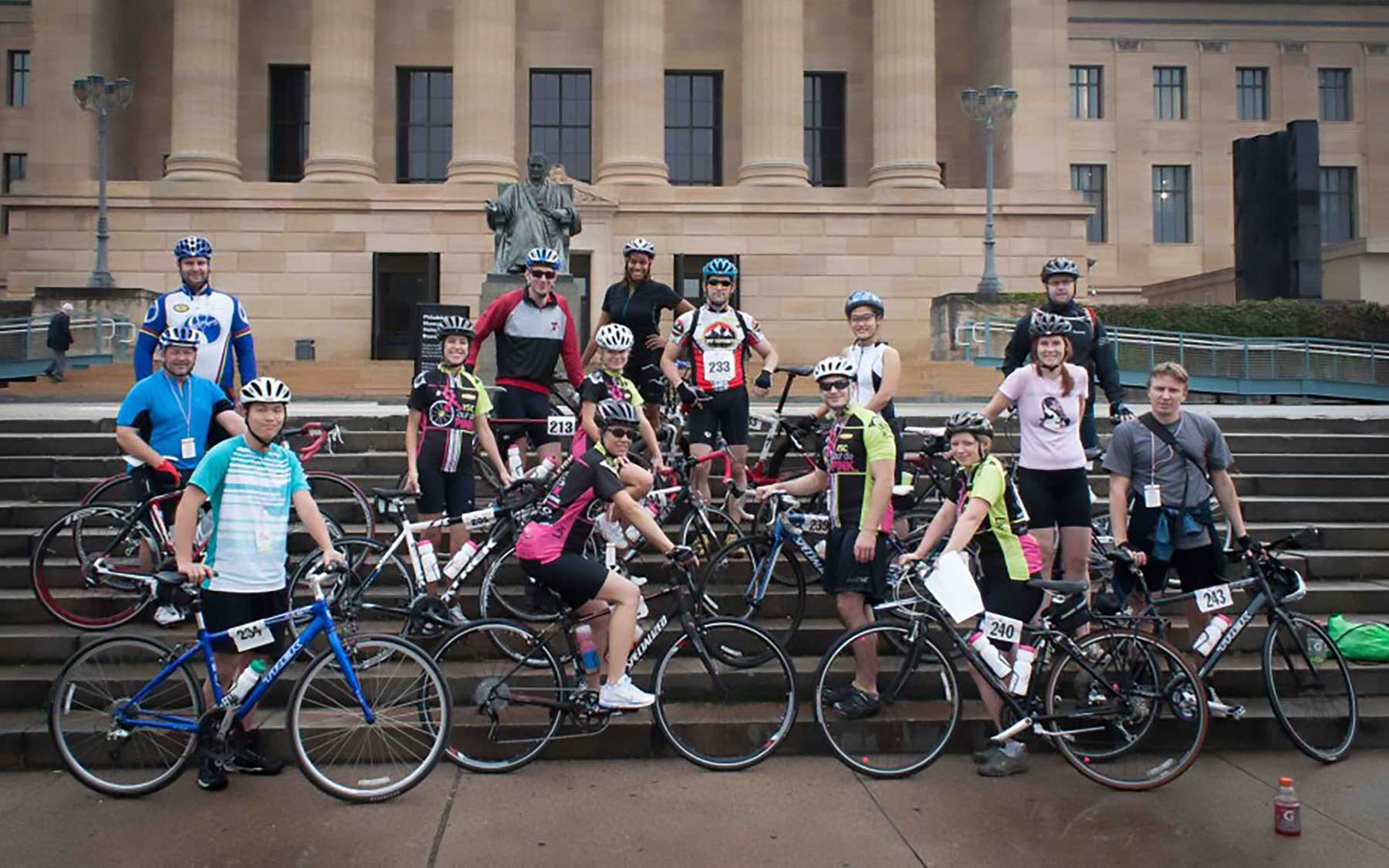 Scientists from Cold Spring Harbor Laboratory on the Young Survivor Coalition's "Tour de Pink" bike ride
email envelop icontwitter icon share buttonfacebook icon share buttonlinkedin icon share button
As researchers at Cold Spring Harbor Laboratory we work with cancer cells day in, day out.  We hope that one day we will discover something that will change the lives of the many people diagnosed with cancer. Seldom do we get to see the real impact of the disease in the clinic or on survivors and their families. But that changed when CSHL Professor Greg Hannon was approached by the Young Survival Coalition (YSC), a global organization dedicated to the critical issues unique to young women diagnosed with breast cancer.

Their question for Greg: did he want to get a team together to take part in their annual fundraising event, an extended bike ride starting in Philadelphia called the Tour de Pink? Being an avid cyclist himself, Hannon was keen to help the charity and looked to his lab for support.  Interest was scattered at first, but then word spread to other groups at CSHL and before long the team From Bench to Bikeside was formed.

The team was 15 members strong, with a mix of graduate and postgraduate scientists. Each person committed to biking a not-inconsiderable 85 miles, from Philadelphia to Lancaster, in just 8 hours and raising a minimum of $250.

For some this seemed like a walk in the park. For others it was more of a challenge. When we found out at least 40 miles of the route would be up some tough hills however, the prospect became daunting even for the most experienced cyclists in the group.

After months of preparation the day arrived. Our fundraising was a success, easily exceeding its target, and everyone had invested in some well-padded cycling shorts. We were ready! Like children on a school trip we bundled ourselves and our bikes into Lab-loaned minibuses and set off to Philadelphia.

Luckily the storms predicted for the day failed to materialize, the weather was at least on our side. The atmosphere for the event was one of solidarity. During the ride we met many people affected by breast cancer: women who been through the ordeal, men who were riding in support of their wives or other loved ones, and people riding in memory of relatives or friends.

It was an eye-opener for all involved. It gave us scientists perspective on what we spend our daily lives working for in the lab. For the survivors and other riders it was a chance to feel the support of people “out there” trying all sorts of new ideas to help find a cure.

The ride itself was tough. At times it seemed that the only things that kept everyone going were the rest stops every 20 or so miles. The relentless hills were a test of endurance, whether you were on the bike or pushing it up the hill. We heard one woman exclaim, “This is worse than chemo!”  Nevertheless, as we slowly made our way up the hills, there were still smiles and encouragement, from over-taking cyclists, from the support vehicles, and even from people cheering in their front garden.  For some, such as myself, who refused to give in and be picked up by the bus, the two fantastic support riders—one of whom had lost his wife to breast cancer—offered very welcome company and directions.

Eight long hours later we crossed the four lanes of traffic to follow the arrow marked “FINISH.” Friends and family members cheered everyone as we pulled into the final stop. Some riders had been there for some time already, some were still biking in, but all were glad to have achieved something for themselves, and for many others.

For many of the riders this battle with the bike was to be repeated over a 3-day event ending in Washington DC. However, for us it was over. We piled our bikes in the van and headed for the showers. The next day we headed back to the Lab, perhaps with a fresh outlook on how our experiments might affect people.

We would like to offer a huge thank-you for everyone who supported us: family and friends, companies, vendors, and their representatives with whom we work closely, all of whom made generous donations. With your help we raised almost $8,000.

For a special “Movember” edition of Cocktails and Chromosomes, Dr. Lloyd Trotman explained what his lab is doing to understand deadly prostate cancers.   Read more »