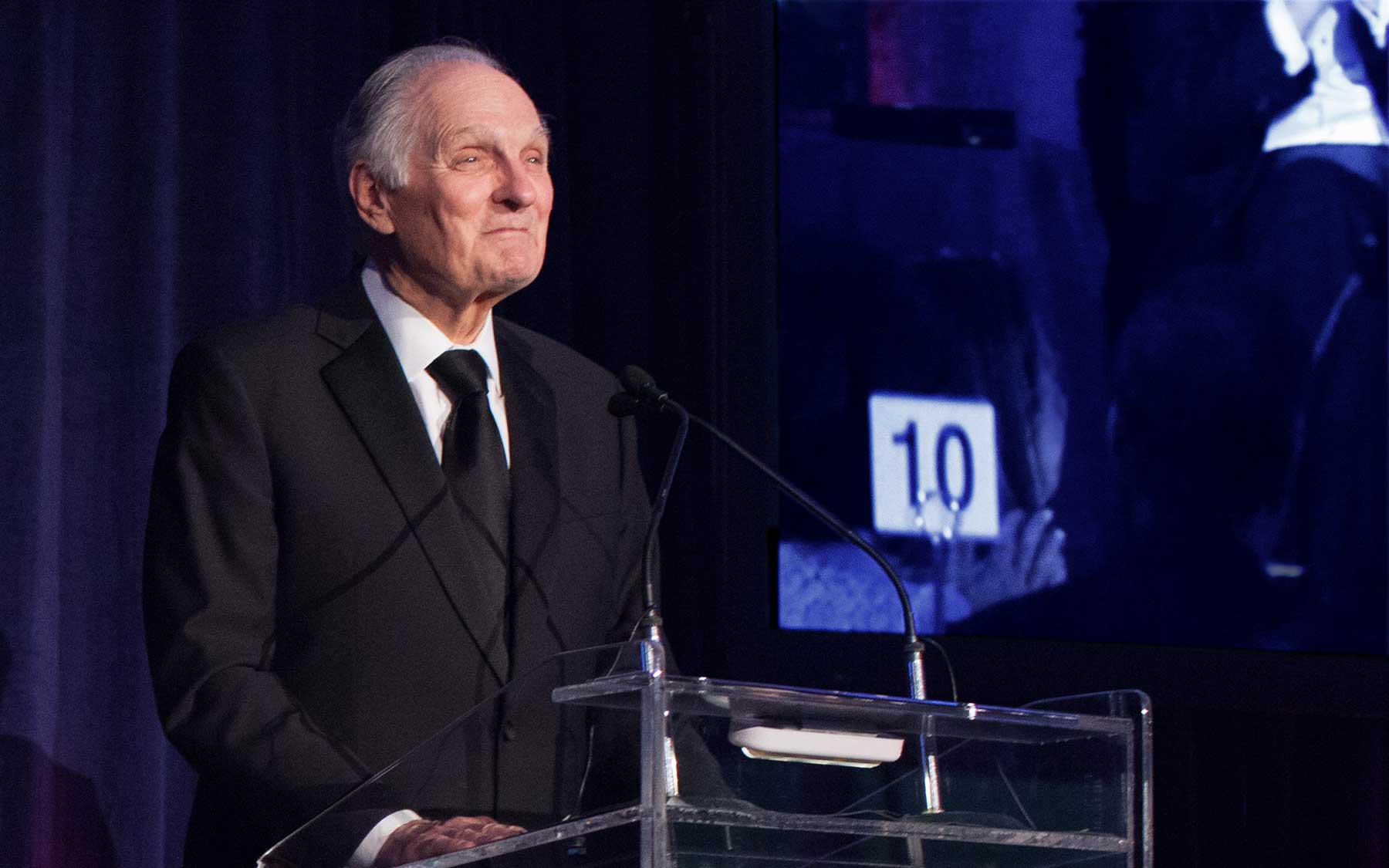 Alan Alda, famous for his role in the classic TV series “M*A*S*H” and the PBS series “Scientific American Frontiers,” recently received a 2016 CSHL Double Helix Medal. We caught up with him after the ceremony to hear more of his thoughts on the importance of science communication, particularly in the fields of molecular biology and genetics.

Of all of the wisecracks that Alan Alda delivered while playing the role of Hawkeye on the classic television series M*A*S*H, “insanity is just a state of mind” sticks out. While the idea of “states of mind” gave rise to one of his character’s most famous jokes, Alda began to take this concept very seriously later in his career. Science had been a lifelong passion for Alda, and he began to realize that certain mindsets were preventing others from sharing in that joy and wonder. In 2009, he founded the Alda Center for Communicating Science at Stony Brook University to help scientists get out of the mindset of talking to their peers in technical terms, and into a state of mind that allows them to talk to everyday people in language that they understand.

Over the seven years since the center’s creation, its staff has trained over 7,000 scientists, doctors, and nurses in science communication. These efforts earned Alda a 2016 CSHL Double Helix Medal, and we followed up with him shortly after the award ceremony on December 1. He explained that, “it’s not going to work to just tell us all of the details a scientist knows about his or her work—the focus has to be on what we’re understanding.” Here’s some more of that conversation:

The following transcript has been edited for length.

Andrea: Congratulations on receiving a Double Helix Medal from Cold Spring Harbor Laboratory! What were the highlights of the night for you?

Alan: Well, naturally, it was a wonderful honor and a surprise to get the award, and I really appreciated it. During the evening, I was sitting under the big blue whale at the Museum of Natural History, and it just occurred to me while I was sitting there, that we all are amazed by the beautiful songs of the whales. The whales are communicating to one another, but we don’t know what they’re saying! We don’t know what they’re communicating. That’s the same feeling we have in the general public when we hear scientists communicating with one another—singing their songs of science, and we have no idea what they mean.

We’ve made videos asking people, “what is DNA?” and “where is DNA?” And we’ve gotten some really—uh, unusual answers.”

But, I have to tell you that the most unexpected and I think the happiest moments for me that night were when the dozen or so scientists came up to me during the evening to tell me they had taken the training from the Alda Center and it had changed them and they were grateful for the training they got. It just made me so happy to hear that it had succeeded in all those people’s work and in their lives.

Andrea: Many of those scientists are in the fields of molecular biology and genetics—do you think there are any reasons that scientists in those fields in particular should care about the public’s understanding of their research?

Alan: Well, I think there’s something special about that research because people have only recently begun to get a glimmer of what DNA itself is—I’m talking about the general public. We’ve gone out in the street and made videos asking people, “what is DNA?” and “where is DNA?” And we’ve gotten some really—uh, unusual answers.

Andrea: Do any of them come to mind?

Alan: When one person answered the question, “where is DNA?” she said, “it’s in your hair.” Which, well, it is in your hair, but it’s all over, too! But she’s getting her training, getting her understanding of what DNA is, from crime shows—which is ok, but it’s a limited exposure to what she needs to know if she’s ever going to be in the position of making a decision on public funding of research. The public elects people who fund science, and if the public doesn’t understand it or is scared of it, that’s not going to be good for the funding. It’s also not good for the people as they become consumers of the science in medical settings.

Andrea: That’s an important point you brought up—that one of the issues that we want to avoid through good communication is people becoming scared of the research that scientists are doing.

Alan: You know, we already have a negative reaction that’s not warranted—at least, plenty of which is not warranted—in objecting to genetically modified food. Because people don’t realize that all the food that they eat has been genetically modified over thousands of years on farms and are worried that what they consume will have stuff in it that’s going to harm them. There are concerns that ought to be raised, and cautions that are already raised by many scientists, about all kinds of genetic work. The public, I think, needs to be informed about it enough to raise valuable concerns, not concerns based on fear, misunderstanding, and lack of knowledge.

Andrea: Right, the point is not that scientists are infallible and that people shouldn’t be questioning what they do, it’s that they should be able to ask informed questions.

Andrea:  How might scientists do better at telling science stories that deal with sensitive subjects like using gene “editing” to improve food crops?

Alan: Well, I think there are so many ways to tell a story. You can tell a story where the leading character is somebody who has benefitted from research, like the wonderful video that was shown the other night at the award dinner. It was about a child with, basically, childhood Lou Gehrig’s disease.

Alan: Yeah, the whole family was impacted by this, both negatively when the child became ill, and really positively when progress was made. And there wasn’t anyone in the room who wasn’t moved by that. And because they were moved, they’ll remember it. There was hardly any talk about the details of how it was accomplished, but the communication that this work is helping people be healthy is an important message.

Other ways to tell stories are to make the gene a character and see how the gene behaves. Or, to tell the story of the work itself. There’s no experiment, there’s no life in science, that isn’t a wonderful, dramatic story. People are trying to achieve something, things go wrong, they have to work against obstacles that are thrown in their path, studies go wrong, experiments on the bench go wrong. If they lose their funding, they lose their colleagues. There are all kinds of storytelling elements that are usually ignored when science is communicated because the main message is thought to be “we came up with this, and it’s really interesting.” And how you came up with it is the story in many cases! We want to hear that story.

Andrea: Genetic sequencing and related technologies are percolating into all of these different corners of our lives. Do you think that effective communication about the topics of molecular biology and genetics is going to become even more important than it is now?

Alan: Yeah, I do. Because the more we know, the more deeply we know about things, and that’s progressing at a very rapid pace—this deeper and deeper understanding of nature—it involves understanding very complex systems, very complex interactions of various processes, not just one process. It’s getting more and more complex, what we understand, and therefore it’s understood by specialists in a special language. And for us to understand it, it’s not going to work to just tell us all of the details a scientist knows about his or her work. The focus has to be on what we’re understanding. What you say really does matter, but how it’s received, in a way, matters more. Because if you say the exact right thing, but I don’t understand it, it didn’t really matter that you said the exact right thing.

Andrea: As science and technology advance and some of these things become more of an everyday experience, people might just absorb knowledge through exposure. But if people aren’t prepared…

Alan: Right, and in addition to that, we have to remember that there’s wonderful, beautiful work being done, for instance, at Cold Spring Harbor.  For people in the general public not to have an appreciation of that, not to have the chance to be amazed and energized by it, would really be a shame. We need to understand that because, as I said the other night, just imagine if someone said there’s going to be no music anymore, no music of any kind. We’d feel that loss really deeply because music sustains us. We’re already in that spot if we don’t understand the brilliant science that’s being done. If it’s not explained by the scientists themselves, someone else is going to explain it, like “CSI” on television. And people will think that DNA is in your hair, and that’s all they’ll know about it.