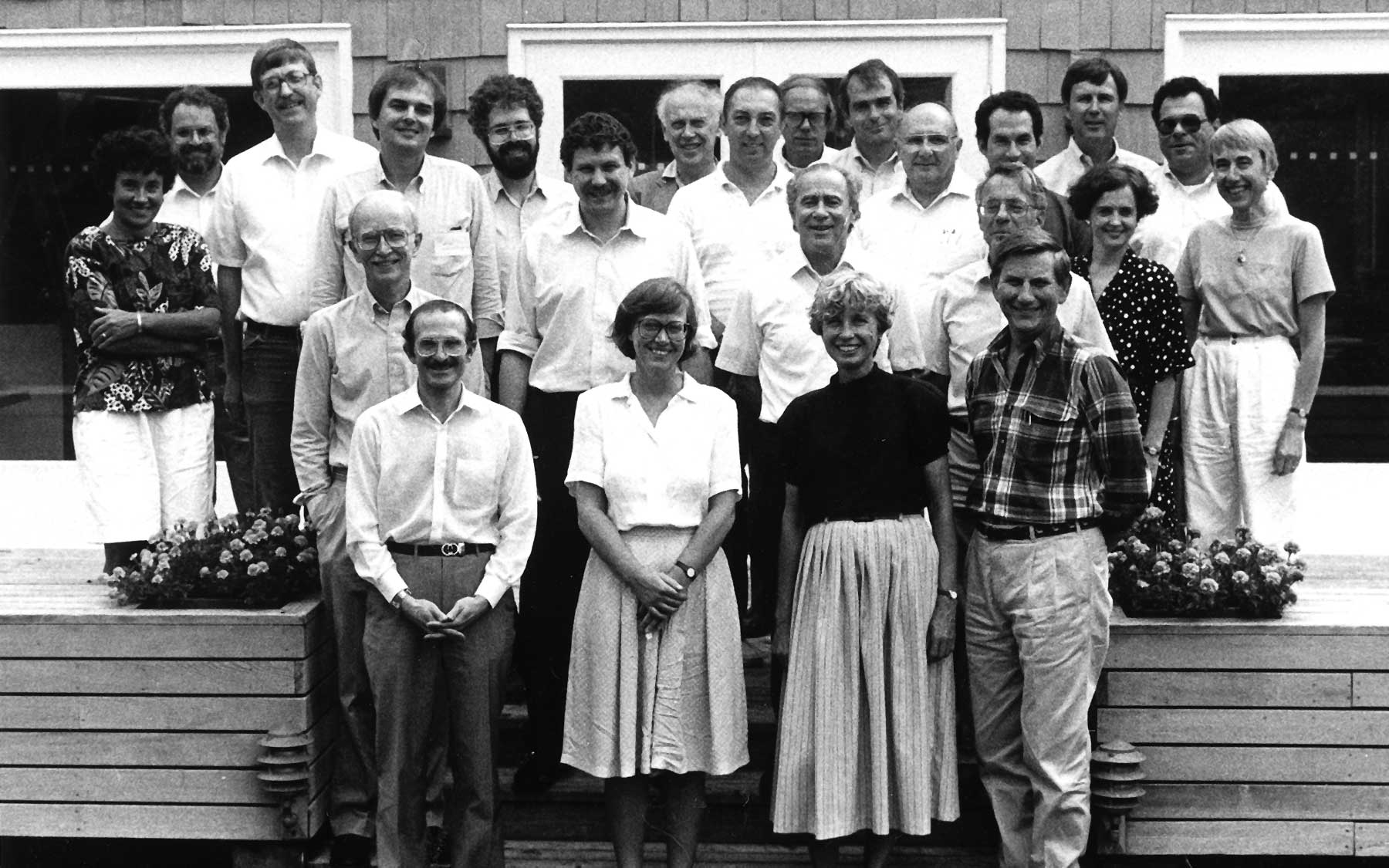 email envelop icontwitter icon share buttonfacebook icon share buttonlinkedin icon share button
After we posted a blog entry celebrating the 25th anniversary of the launch of the Human Genome Project (HGP), Nancy Craig, a professor emerita in the Department of Molecular Biology & Genetics at Johns Hopkins University School of Medicine, sent in a question that we thought the rest of you Lab Dish readers might be interested in: Who are the other scientists in the photo from the 1989 Banbury meeting? And why don’t we ever hear about the women?! 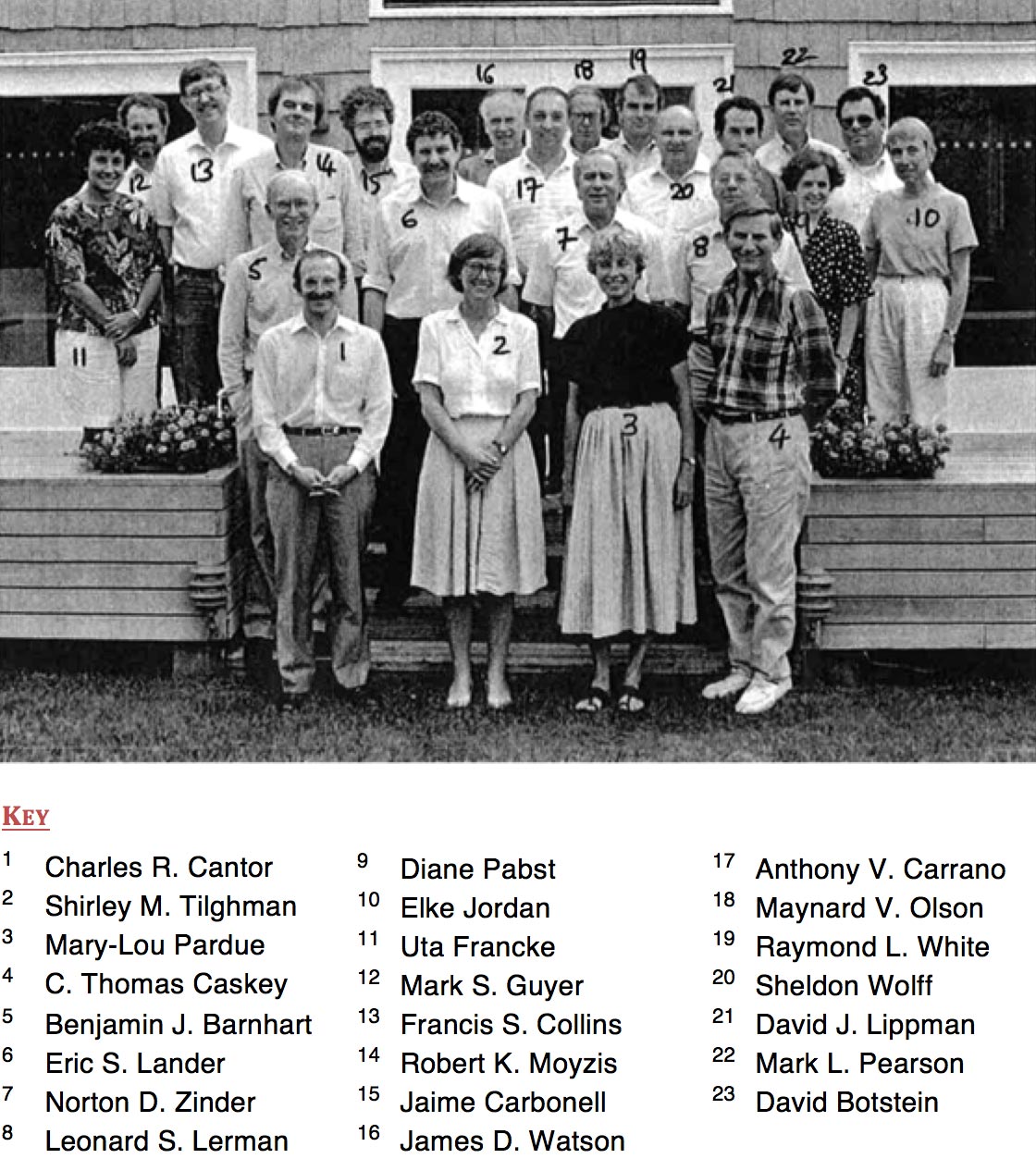 James Watson, Francis Collins, and Eric Lander were easy to pick out, but matching names to many of those other faces smiling with excitement about the HGP was more of a challenge. They may not be famous for their faces—it’s safe to say that science only occasionally leads to that sort of celebrity—but make no mistake: the attendees of that Banbury meeting were science all-stars.

Among them is Elke Jordan, number 10 in the photo. She devoted 30 years to advancing science at the NIH, where she laid the foundation for the HGP. Starting in 1989, she served as Deputy Director of the National Human Genome Research Institute, the organization that launched the HGP the following year. She was instrumental to the project, and did all of the initial hiring—Mark Guyer, number 12, was among the first people she brought on board.

Shirley Tilghman, 2, is currently a professor of molecular biology at Princeton University, among other positions including her role as a director on the board of Google Inc. She was elected Princeton’s first female president in 2001, and contributed to the cloning of the first mammalian gene as a postdoc at the NIH.

Uta Francke, 11, is currently a professor of Genetics and Pediatrics Emerita at Stanford University and former president of the American Society for Human Genetics and the International Federation of Human Genetics. Since 2007, she’s also been a consultant to 23andMe—the direct-to-consumer genetic testing company that 2015 Double Helix Medal honoree Anne Wojcicki co-founded.

David Botstein, 23, as it happens another 2015 Double Helix Medal honoree, is a professor of genomics at Princeton, and a pioneer of genomics as well as an early proponent of the Human Genome Project. Botstein has been a scientific advisor to CSHL for many years.

Norton Zinder, 7, discovered, with Joshua Lederberg, that bacteriophage can transfer genes from one bacterium to another, a process called transduction. For decades a distinguished professor of genetics at Rockefeller University, Zinder died in 2012.

These are just a few of the outstanding scientists at the 1989 Banbury meeting on the HGP. It should be noted that in total, there were 23—the number of different chromosomes in the human genome. Coincidence?

Do you have anything you’d like to share about one of these 23 scientists’ involvement in the HGP? Let us know in the comments!

Nancy Craig has come CSHL to do research while on sabbatical and has been many CSHL meetings, mostly related to the bacteriophage, which she has studied for much of her career.