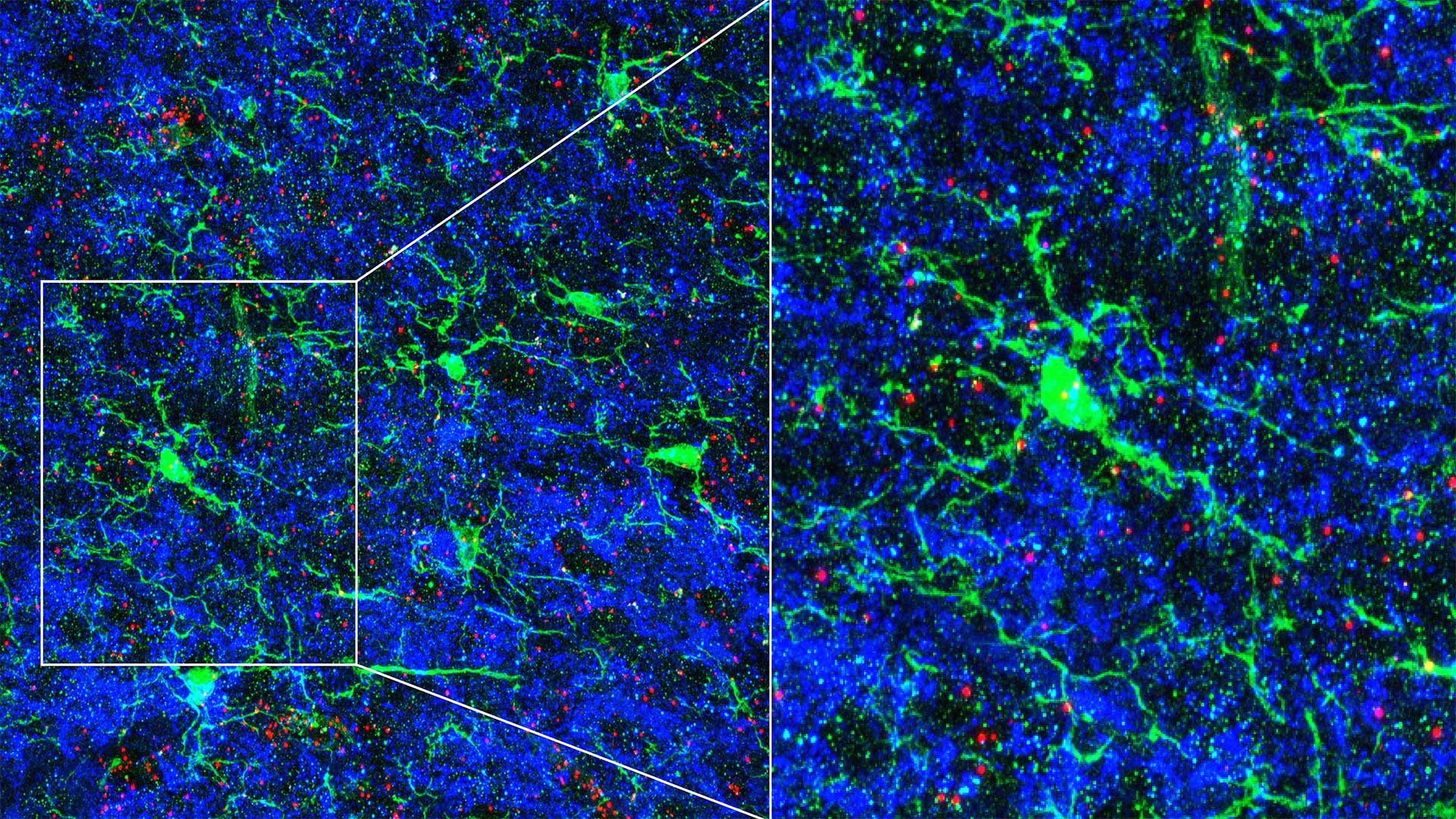 Brain immune cells, called microglia, protect the brain from infection and inflammation. It turns out that they also sculpt circuits in the developing brain in response to sensory cues.

Immune cells play an unexpected role in fine-tuning the brain’s neural circuits, according to research published in September, 2020 in Neuron. The immune cells that reside there, known as microglia, not only protect the brain from infection and inflammation, they also help physically sculpt circuits in the developing brain. The new work demonstrates that microglia also direct neurons to modify their own connectivity in response to sensory cues.

Cold Spring Harbor Laboratory (CSHL) Assistant Professor Lucas Cheadle discovered this cellular communication as a postdoctoral researcher in the laboratory of Michael Greenberg, a neuroscientist at Harvard Medical School. Cheadle’s research explores the connections between biology and the external world, and he is particularly interested in how neural circuits are refined in response to sensory experience.

“To a large extent, the general architecture and wiring of the brain is accomplished by birth,” he says. “But it really requires this robust feedback from the environment to continue that maturation.” As an animal interacts with its surroundings, some neuronal connections are eliminated while others are strengthened, he explains. It’s a process that, in humans, continues for decades after birth. Cheadle says:

“What’s really important’s that during development, the right neurons connect with one another in the right way. We want to have tight control over how many connections there are and how strong the connections are. So that’s actually something that sensory experience is important for.”

Cheadle and colleagues monitored the connections between neurons, or synapses, in a visual processing circuit in the brains of mice. Young mice need visual input at the right time to develop brain pathways related to vision. But if the mice lack visual input for a critical period, the circuits sprout too many synapses and the mice end up with abnormal connections. The team found that the circuits relied on microglia, which, with the right visual stimuli, signaled nearby neurons to prune some of the synapses.

This impact on neural connectivity represents a new role for microglia in the healthy brain, and could help explain why the cells have been implicated in autism and other neurodevelopmental disorders. “I think this study will be seen as a big breakthrough in our mechanistic understanding of how sensory experience and microglia coordinate the process of synaptic pruning that is critical for brain maturation in early life,” Greenberg says.

At CSHL, Cheadle will investigate this interaction in more depth, tracing the molecular signals that lead to synapse disassembly as well as the changes that take place within microglia in response to environmental cues. “The very idea that microglia are able to upregulate the expression of genes in response to visual experience in and of itself is fascinating for me, because these are immune cells,” he says.

Brain immune cells, called microglia, protect the brain from infection and inflammation. It turns out that they also sculpt circuits in the developing brain in response to sensory cues.