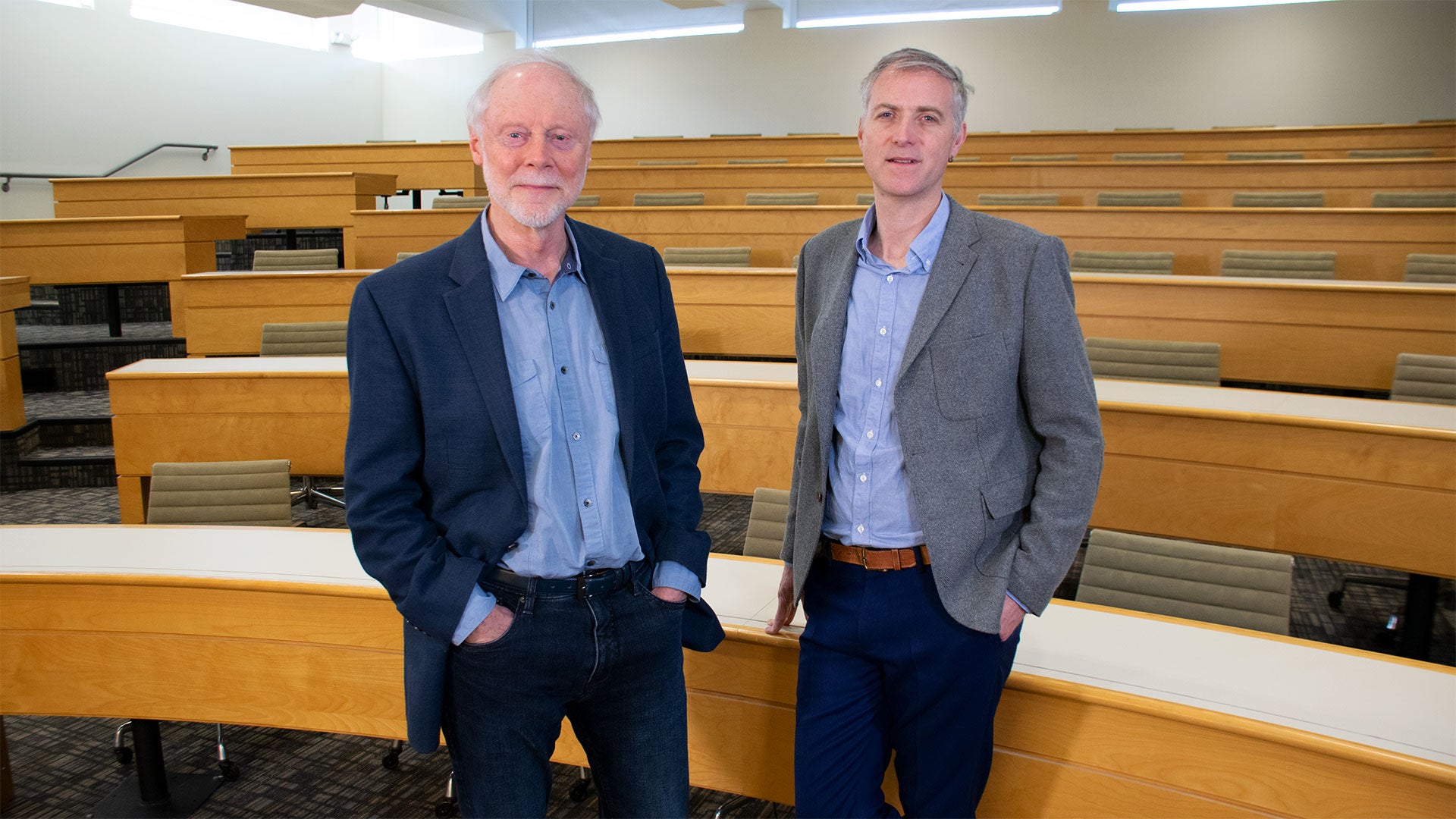 The Cold Spring Harbor Laboratory (CSHL) School of Biological Sciences awarded honorary Doctor of Science degrees to CSHL Press Executive Director John R. Inglis, and Assistant Director Richard Sever this year. They are being recognized for their leadership and achievements as CSHL Press directors, including founding the Laboratory’s preprint servers bioRxiv and medRxiv. The servers provide free, rapid, public access to the world’s latest scientific research, and in 2020, medRxiv became the primary source for COVID-19 pandemic research. Read more about the honorees here:

John R. Inglis is the executive director and publisher of CSHL Press and a co-founder of the Laboratory’s preprint servers bioRxiv and medRxiv. He received his Ph.D. in immunology from Edinburgh University Medical School. He was appointed assistant editor of The Lancet medical journal in London. In 1980, he became founding editor of a new monthly review journal, Immunology Today (now Trends in Immunology), in Cambridge. He also contributed articles on medical research to The Guardian and The Times newspapers and New Scientist magazine, including the first British media report on the outbreak of the HIV/AIDS pandemic.

In 1987, he was invited by James Watson to come to CSHL to build on the foundations of a small but highly regarded book publishing program and a newly launched journal. He founded CSHL Press in 1988. Working with distinguished scientists worldwide, he has led a talented staff in creating a Laboratory division that publishes outstanding journals and successful books for scientists and the public, while augmenting the Laboratory’s reputation and assisting it financially. Since the founding of the CSHL School of Biological Sciences, he has been an Academic Mentor for 15 graduate students, and he is currently a member of the School’s Executive Committee. He currently also serves on the advisory boards of MIT Press and the Research on Research Institute.

In 2013, he and colleague Richard Sever conceived and launched bioRxiv (pronounced “bio-archive”), a free service for the distribution of research manuscripts online without the delay and frustrations of traditional peer review–based publication. In 2019, he was a co-founder of medRxiv, an equivalent service for health sciences. Six months later, medRxiv became the primary channel for COVID-19 pandemic research that included epidemiological data, treatments, vaccine development, variant identification, and clinical trials. Now with 185,000 preprints from 150 countries, and growing by 4,000 manuscripts a month, bioRxiv and medRxiv are transforming how biomedical scientists communicate, accelerating the pace of science, and providing free, rapid, public access to the world’s latest research.

Richard Sever is the assistant director of CSHL Press and co-founder of the preprint servers bioRxiv and medRxiv. Richard grew up in England and studied for his undergraduate degree at the University of Oxford, graduating with 1st Class honors in Biochemistry. He switched to Cambridge for his Ph.D., researching signal transcription pathways involved in regulation of AP1 transcription factors at the MRC Laboratory of Molecular Biology.

After his Ph.D., Richard trained as an editor, working first at Current Opinion in Cell Biology and then Trends in Biochemical Science. He later became executive editor of Journal of Cell Science at The Company of Biologists, where he played an important role developing and expanding the scientific scope of their publications and transitioning their journal program to online publishing.

Richard joined CSHL in 2008 and launched the journals Cold Spring Harbor Perspectives in Biology and Cold Spring Harbor Perspectives in Medicine, for which he serves as executive editor, and the precision medicine journal Cold Spring Harbor Molecular Case Studies. He has also edited several books, including the textbook Signal Transduction and Career Alternatives for Biomedical Scientists, a handbook for students and postdocs moving into non-research careers. Richard co-founded the preprint servers bioRxiv and medRxiv with John R. Inglis to allow scientists and health professionals to share research much more rapidly so that the scientific community can immediately start building on new findings.

bioRxiv has become an essential resource for biomedical researchers since its launch in 2013, and both bioRxiv and medRxiv have played a critical role during the COVID-19 pandemic. Millions of people visit these sites every month to learn about the latest developments in SARS-CoV-2 research, vaccine development, and new virus variants, and the servers are encouraging all scientists to rethink how research should be shared in the 21st century.

The newly published fourth edition of Essentials of Glycobiology is now available for purchase in print and online.   Read more »