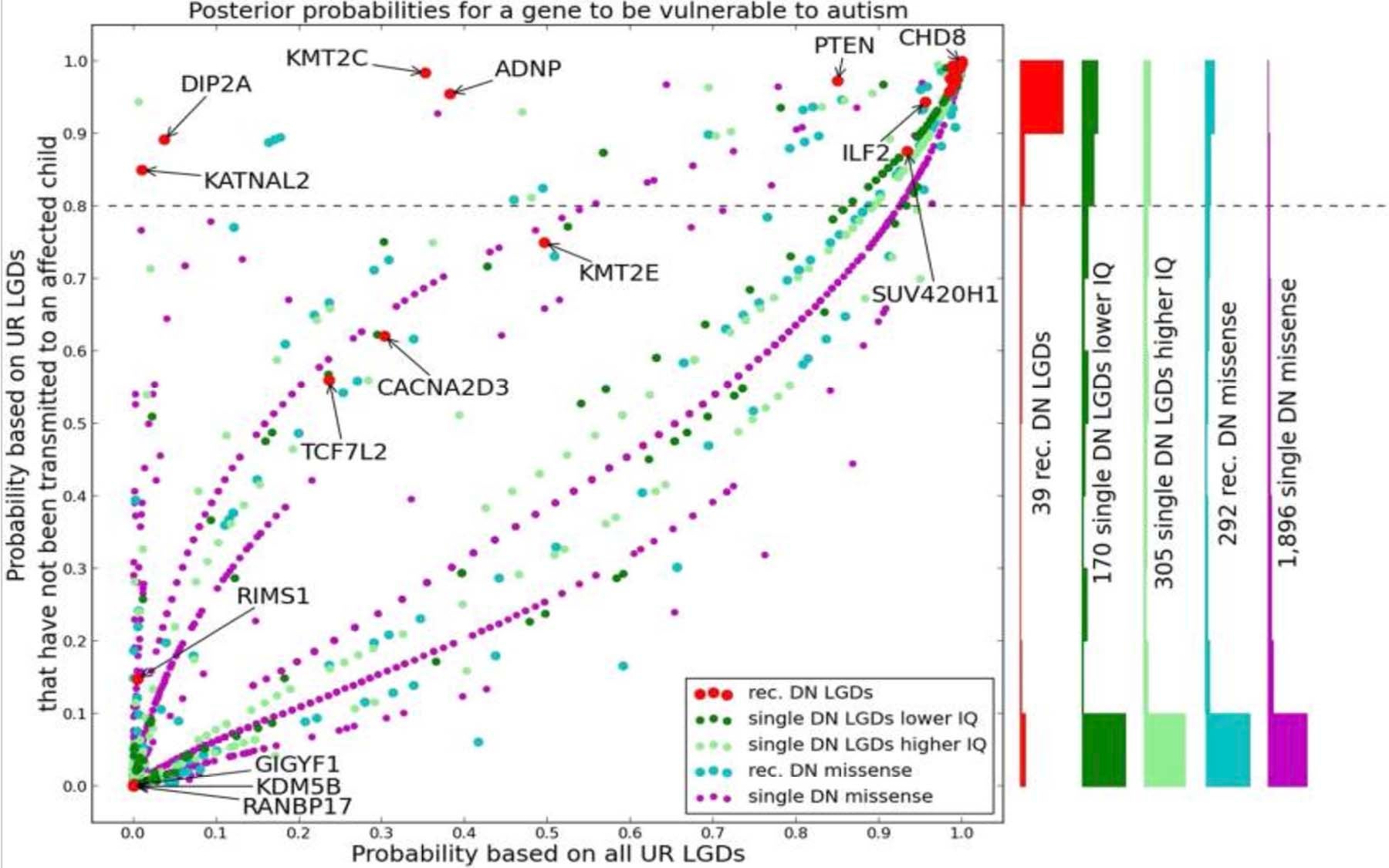 Cold Spring Harbor, NY — A team led by researchers at Cold Spring Harbor Laboratory (CSHL) this week publishes in PNAS a new analysis of data on the genetics of autism spectrum disorder (ASD). One commonly held theory is that autism results from the chance combinations of commonly occurring gene mutations, which are otherwise harmless. But the authors’ work provides support for a different theory.

They find, instead, further evidence to suggest that devastating “ultra-rare” mutations of genes that they classify as “vulnerable” play a causal role in roughly half of all ASD cases. The vulnerable genes to which they refer harbor what they call an LGD, or likely gene-disruption. These LGD mutations can occur “spontaneously” between generations, and when that happens they are found in the affected child but not found in either parent.

Although LGDs can impair the function of key genes, and in this way have a deleterious impact on health, this is not always the case. The study, whose first author is the quantitative biologist Ivan Iossifov, a CSHL assistant professor and on faculty at the New York Genome Center, finds that “autism genes”—i.e., those that, when mutated, may contribute to an ASD diagnosis—tend to have fewer mutations than most genes in the human gene pool.

This seems paradoxical, but only on the surface. Iossifov explains that genes with devastating de novo LGD mutations, when they occur in a child and give rise to autism, usually don’t remain in the gene pool for more than one generation before they are, in evolutionary terms, purged. This is because those born with severe autism rarely reproduce.

The team’s data helps the research community prioritize which genes with LGDs are most likely to play a causal role in ASD. The team pares down a list of about 500 likely causal genes to slightly more than 200 best “candidate” autism genes.

The current study also sheds new light on the transmission to children of LGDs that are carried by parents who harbor them but whose health is nevertheless not severely affected. Such transmission events were observed and documented in the families used in the study, part of the Simons Simplex Collection (SSC). When parents carry potentially devastating LGD mutations, these are more frequently found in the ASD-affected child than in their unaffected children, and most often come from the mother.

This result supports a theory first published in 2007 by senior author Michael Wigler, a CSHL professor, and Kenny Ye, a statistician at Albert Einstein College of Medicine. They predicted that unaffected mothers are “carriers” of devastating mutations that are preferentially transmitted to children affected with severe ASD. Females have an as yet unexplained factor that protects them from mutations which, when they occur in males, will be significantly more likely to cause ASD. It is well known that at least four times as many males as females have ASD.

Wigler’s 2007 “unified theory” of sporadic autism causation predicted precisely this effect. “Devastating de novo mutations in autism genes should be under strong negative selection,” he explains. “And that is among the findings of the paper we’re publishing today. Our analysis also revealed that a surprising proportion of rare devastating mutations transmitted by parents occurs in genes expressed in the embryonic brain.” This finding tends to support theories suggesting that at least some of the gene mutations with the power to cause ASD occur in genes that are indispensable for normal brain development.

The work described here was supported by the Simons Foundation Autism Research Initiative.

“Low load for disruptive mutations in autism genes and their biased transmission” appears in the Early Edition of Proceedings of the National Academy of Sciences the week of September 21, 2015. The authors are: Ivan Iossifov, Dan Levy, Jeremy Allen, Kenny Ye, Michael Ronemus, Yoon-ha Lee, Boris Yamrom and Michael Wigler. The paper can be obtained at: http://www.pnas.org/content/early/recent

CSHL Professor Zach Lippman was interviewed on a BBC podcast about the future of agriculture in the UK and Europe.   Read more »