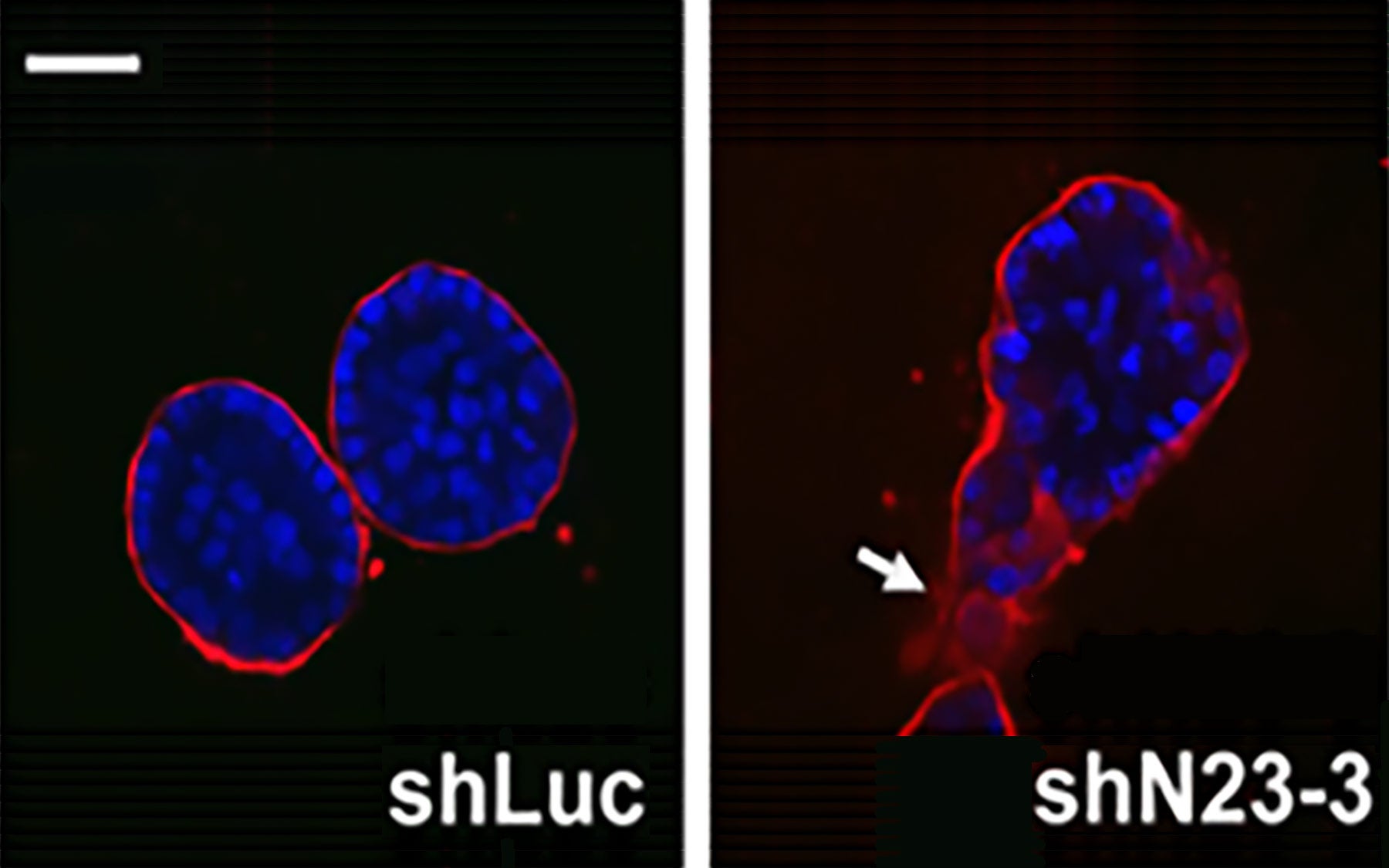 PTPN23 can regulate the SRC oncoprotein; basis for a new therapeutic approach

Cold Spring Harbor, NY — Researchers at Cold Spring Harbor Laboratory (CSHL) have identified an enzyme that appears to be a significant regulator of breast cancer development. Called PTPN23, the enzyme is a member of a family called protein tyrosine phosphatases, or PTPs, that plays a fundamental role in switching cell signaling on and off. When the scientists suppressed the expression of PTPN23 in human mammary cells, they noted a cascade of effects that included the cells breaking away from their anchors; their scattering; and their invasion through extracellular matrix (cells’ mooring in tissue). These are the hallmarks of metastasis, the primary cause of mortality in cancer.

PTPs are able to affect cell signaling as a consequence of their very specific biochemical function: they remove phosphate groups from other molecules. Another family of enzymes, called kinases, does precisely the opposite: its members add phosphate groups, and in so doing, work together with the PTPs to regulate cell signaling.

CSHL Professor Nicholas Tonks, who purified the first PTP over 20 years ago, is an authority on phosphatases. He teamed up with CSHL Associate Professor Senthil Muthuswamy, an expert on kinases and breast cancer biology, who is also affiliated with the University of Toronto. They and their colleagues methodically suppressed each of the 105 known PTPs, in a cell culture system constructed to simulate mammary epithelial tissue. The cells were also modified so that the cancer-promoting receptor protein called HER2 (itself a kinase) could be activated selectively. Overabundant HER2 protein (also called ErbB2) is associated with aggressive disease and poor prognosis, and is found in about one-fourth of those who have breast cancer.

To determine the possible impact of PTPs on cancer development in cells expressing activated HER2, the team assembled a library of short-hairpin RNA molecules, or shRNAs, which had the ability to inactivate, one by one, the genes responsible for expressing each PTP. Of the 105 PTPs, they observed that three of them, when suppressed, were associated with increased motility, or the ability of the mammary cells to move freely of one another. The suppression of one of these three—PTPN23—was also observed to cause the cells to become invasive.

Part of what makes this finding intriguing is the fact that the CSHL team was able to trace the cause of these effects to specific elements of a complex signaling cascade. And this, in turn, has led the team to identify a potentially powerful new therapeutic strategy in this aggressive cancer type.

They discovered that PTPN23, under normal conditions, i.e., when not suppressed, recognizes and removes phosphate groups from three molecules important in the signaling cascade in breast epithelial cells. These three molecules are called SRC, E-cadherin and β-catenin. Of the three, the key is SRC: it is a type of kinase that, like HER2, is well known to be a cancer-promoter.  SRC-induced anomalies in cell signaling have been linked with breast and other cancer types.

Tonks, Muthuswamy and colleagues demonstrated for the first time that this particular PTP—PTPN23—acts directly on SRC to inhibit its phosphate-adding activity. But when PTPN23 is suppressed, as in the team’s experiments, SRC is free to add phosphates to other molecules in the cell, including E-cadherin and β-catenin. Normally, these molecules are important in cell adhesion.  But when they are phosphorylated by SRC, their ability to function as the “glue” that holds cells to their anchors in epithelial tissue is impaired, and the cells are able to break free. This adds interest to the observation, made by others, that the gene that expresses PTPN23 is located within a “hotspot” on human chromosome 3 (3p21) that is mutated in breast and other cancers.

“Considering the negative effect of PTPN23 on SRC activity, loss of PTPN23 may promote tumor growth and metastasis in breast tumors that are associated with activation of SRC,” the team suggests in a paper on the research published today in the journal Genes & Development.

This fine-grained picture of how an absence of PTPN23 can set in motion a chain of events in breast epithelial cells that promotes cancer proliferation in turn suggests the next step in the research. The team tried and was able to reverse the metastatic effects set in train by PTPN23 suppression in these cancer-cell models by introducing a candidate drug molecule called SU6656, which inhibits SRC.

On the theory that PTPN23 regulates the activity of SRC and the phosphorylation status of the E-cadherin/β-catenin signaling complexes to modulate cell motility, invasion and scattering, the team has moved to a new set of experiments in living mice which have been genetically engineered to lack PTPN23. In such animals, they expect aggressive tumors to form. They seek to address these by treating the mice with inhibitors of SRC.

“Identification of PTPN23 as a novel regulator of cell invasion in mammary epithelial cells from a loss-of-function screen of the ‘PTP-ome’” appears July 1 in Genes & Development. The authors are: Guang Lin, Victoria Aranda, Senthil K. Muthuswamy and Nicholas K. Tonks. The paper can be obtained online at: http://www.genesdev.org/cgi/doi/10.1101/gad.2018911