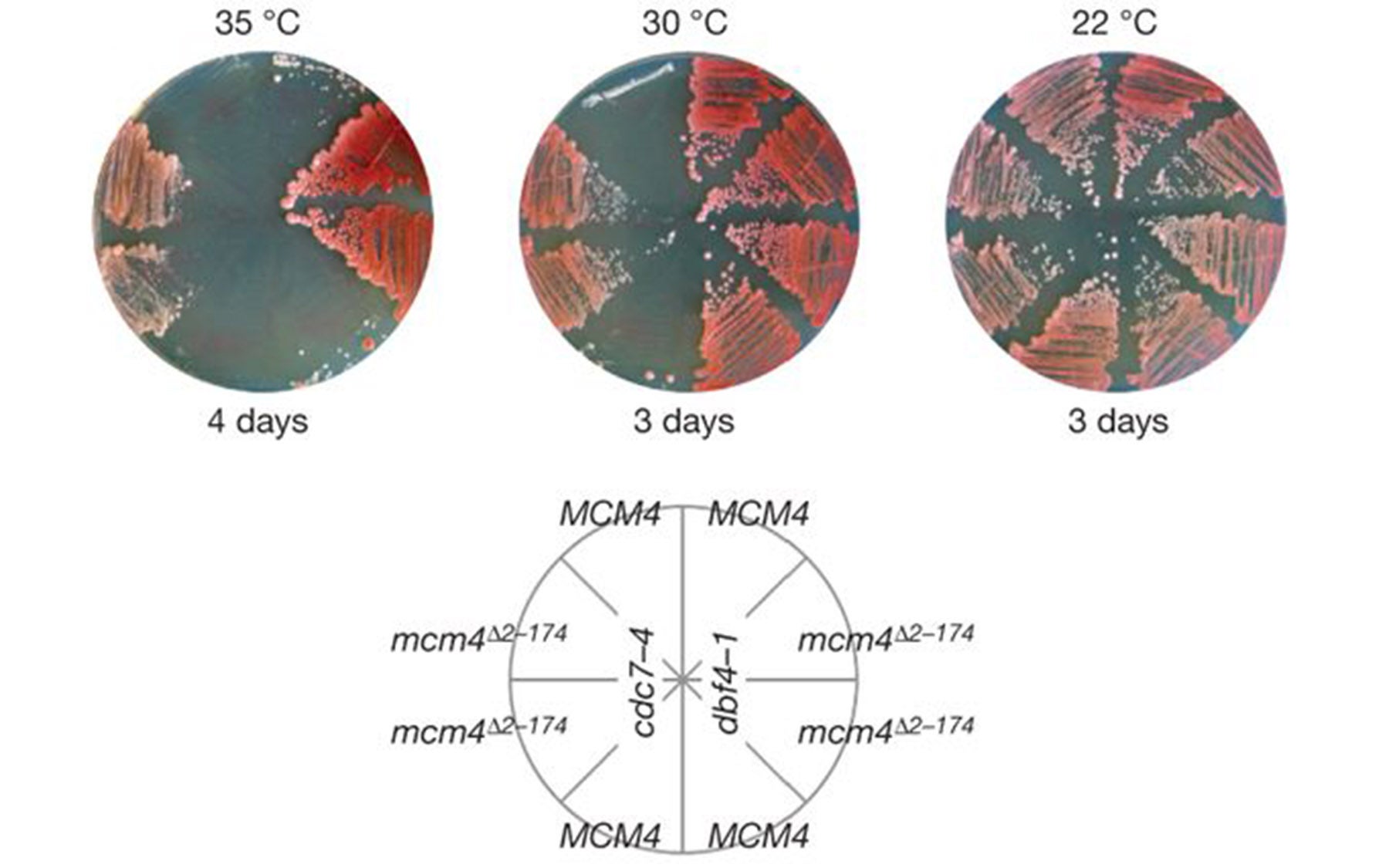 Cold Spring Harbor, NY — Scientists at Cold Spring Harbor Laboratory (CSHL) have discovered how a protein long known to be an essential activator of DNA replication actually triggers this process in cells.

The protein, called DDK (for Ddf4-dependent protein kinase), is an enzyme that attaches phosphate molecules to other proteins to modify their activity. The CSHL team has found that DDK performs this operation, called phosphorylation, on a protein called Mcm4, specifically within a domain that acts as a built-in brake to prevent the DNA double helix from being unwound. The phosphorylation by DDK releases this brake, thus initiating the replication of unwound DNA strands.

“As DDK is often deregulated in human cancers, this new understanding of its role in DNA replication may help shape the development of new cancer therapies,” explains CSHL President Bruce Stillman, Ph.D., who co-authored the study with colleague Yi-Jun Sheu, Ph.D. “Indeed recent studies have identified DDK inhibitors and they are now in clinical trials.” The report was published in Nature on 7th January.

In multicellular organisms, the duplication of the DNA in chromosomes starts at multiple sites, called origins, within the genome. For the genome to retain its integrity each time a cell divides, it’s crucial that each origin “fires,” or becomes active, just once and only during a timeframe in the cell cycle known as the S-phase.

A large number of proteins cooperate and interact with military precision to ensure this “once-only” condition. First, a group of proteins cluster at each origin site to form a pre-replication complex or pre-RC. The phosphorylation of some pre-RC components by DDK, in turn, recruits other proteins to these pre-RCs, converting them into pre-initiation complexes, or pre-ICs.

Over the last 15 years, Dr. Stillman’s group has systematically uncovered many of the pre-RC and pre-IC proteins, and meticulously cataloged when and where each protein interacts with its collaborators. Having found out previously that DDK targets a multi-subunit protein complex called MCM, they’ve now narrowed down DDK’s binding site to a domain within one of the subunits, Mcm4, where it phosphorylates a series of amino acids—protein building blocks—that otherwise inhibit Mcm4 from functioning.

The discovery of this self-inhibitory activity within Mcm4 and the finding that DDK is required to overcome it was a surprise, according to the authors. They propose that such complexity might have evolved in response to the importance of precision and accuracy of DNA replication.

“Although this is the only essential role for DDK under normal conditions, we have found that DDK takes on another task when the cell suffers DNA damage,” says Dr. Stillman. In this hazardous situation, he and his colleague found, DDK activates an S-phase checkpoint mechanism that halts the DNA copying process and initiates DNA repair.

“This discovery of these distinct functions of DDK represents a key piece of the puzzle of how the initiation of DNA replication is coordinated and controlled by kinase proteins,” says Dr. Stillman.

This research was supported by a grant from the U.S. National Institute of General Medical Sciences.

“The Cdc7-Dbf4 kinase promotes S phase progression by alleviating an inhibitory activity in Mcm4,” appears in the 7th January issue of Nature. The full citation is Yi-Jun Sheu and Bruce Stillman. The full paper can be found at http://www.nature.com/nature/journal/v463/n7277/full/nature08647.html (doi:10.1038/nature08647).