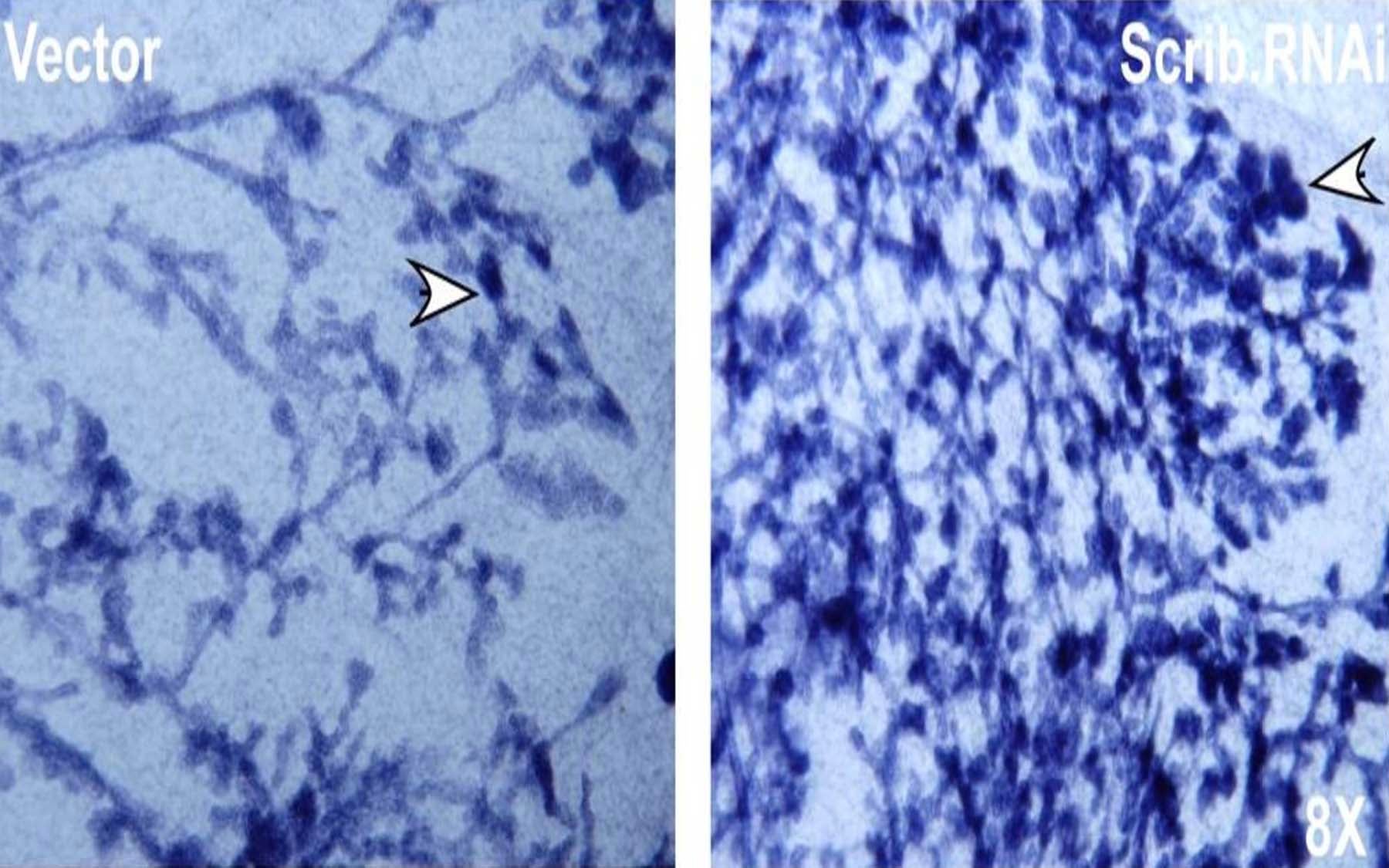 Cold Spring Harbor, NY — In breast tissue, cells lining the breast’s ducts have a certain shape that is required to maintain both organ structure and function. All breast cancers display a loss of this characteristic organization, but very little is known about the molecules and pathways that regulate tissue structure and the role they play during cancer.

A team of scientists at Cold Spring Harbor Laboratory (CSHL) has now discovered that a protein called Scribble, originally discovered as a cell-shape regulator in fruit flies and worms, is an important regulator of breast cancer. They report that normal function of Scribble protein allows breast epithelial cells to form duct-like structures and resist cancer formation. When Scribble stops functioning, the tissue loses its shape and cancers ensue.

A new approach to understanding how cancer begins

The discovery identifies “a new paradigm for understanding how cancer initiates,” according to CSHL Professor Senthil Muthuswamy, Ph.D., who headed the team that conducted the research, to be published in Cell on Nov. 26. The results also constitute first steps toward identifying an entirely new class of molecules and pathways that can be targeted by anti-cancer therapies to prevent pre-cancerous lesions from turning into malignant tumors.

“Thinking about cancer as a disease that results only due to an increase in cell numbers is too simplistic,” according to Muthuswamy. He points out that proteins that control cell number and regulate cell structure are both critical in cancer development. He therefore proposes that carcinomas—cancers derived from epithelial cells in organs such as breast, ovary, prostate, lung and pancreas—should be approached as a problem of “deregulated morphogenic processes and not just as a disease of increased cell number.”

Many studies aimed at unraveling cancer’s molecular mechanisms use cells cultured on plastic dishes as an experimental platform. “Such models have been quite satisfactory in allowing scientists to analyze mechanisms involved in cell growth,” says Muthuswamy. But they don’t allow scientists to capture the three-dimensional organization of cells seen in tissue, including their polarity. A major enabler for Muthuswamy’s current work is an experimental model system that enables him to grow breast cells in three-dimensional cultures to allow them to form structures similar to those seen in breast ducts and lobules.

On Muthuswamy’s novel test bed, cells undergo morphogenesis—a growth/death cycle that expands and shapes tissue. Such cells give rise to what looks like a hollow ball of cells. The polarity protein Scribble lines the sides of each cell, lending to each a specific orientation.

What happens when Scribble is missing

In breast epithelial cells grown in this new experimental culture system, when the Scribble protein is missing, cells were observed by Muthuswamy’s team to radically change their character and behavior. They lost their orientation—an effect one might have predicted since Scribble regulates polarity—and started to fill the hollow ball. The team hypothesized that the filling-in of the “ball” was akin to the process, in living creatures, by which a breast epithelial tumor would form.

To test this notion, the experiment was moved from a cell-culture dish to living animals. Mouse breasts were generated using genetically engineered cells that had stopped producing the Scribble protein. In such mice, the researchers found that breast ducts were deformed and tumors typically developed after about one year’s time. This dramatic result pointed to Scribble, a cell shape regulator, as a tumor suppressor in breast epithelial cells.

The targets of tumor suppressors are usually cancer-causing genes, or oncogenes, such as Myc, which past research has shown to be overexpressed, i.e., present in abnormal quantity, in human breast cancer. Myc is known to activate pathways of both growth and death in breast epithelial cells. In fact, the only way that cancer can occur when Myc overexpressed is if some other mechanism blocks its propensity to induce abnormal cells to commit suicide, a process called apoptosis. Muthuswamy and colleagues now identify this “other mechanism” as the loss of the Scribble protein, which thus is revealed to be a tumor suppressor protein.

Cells engineered by the CSHL team to lack Scribble and overexpress Myc not only stayed alive, but also went into a growth overdrive. The combined effect of polarity loss and Myc overactivation was the formation of unusually large and fast-growing breast epithelial tumors.

The CSHL team worked out the molecular players and specific intracellular pathway controlled by Scribble to initiate cell death. This revealed that Scribble only works as a cancer deflector when it finds itself in the right location—within the junctions between cells. Cellular disorientation occurs when mutations in the gene that orders Scribble to be produced in a cell either prevents its expression or causes it to be expressed in the wrong location within the cell. In either case, the same severe consequence ensues: cancer progression.

How Scribble gets deregulated in cancer remains a mystery. The CSHL team is now addressing the question of how the deregulated Scribble pathway can be targeted for diagnosis and treatment.