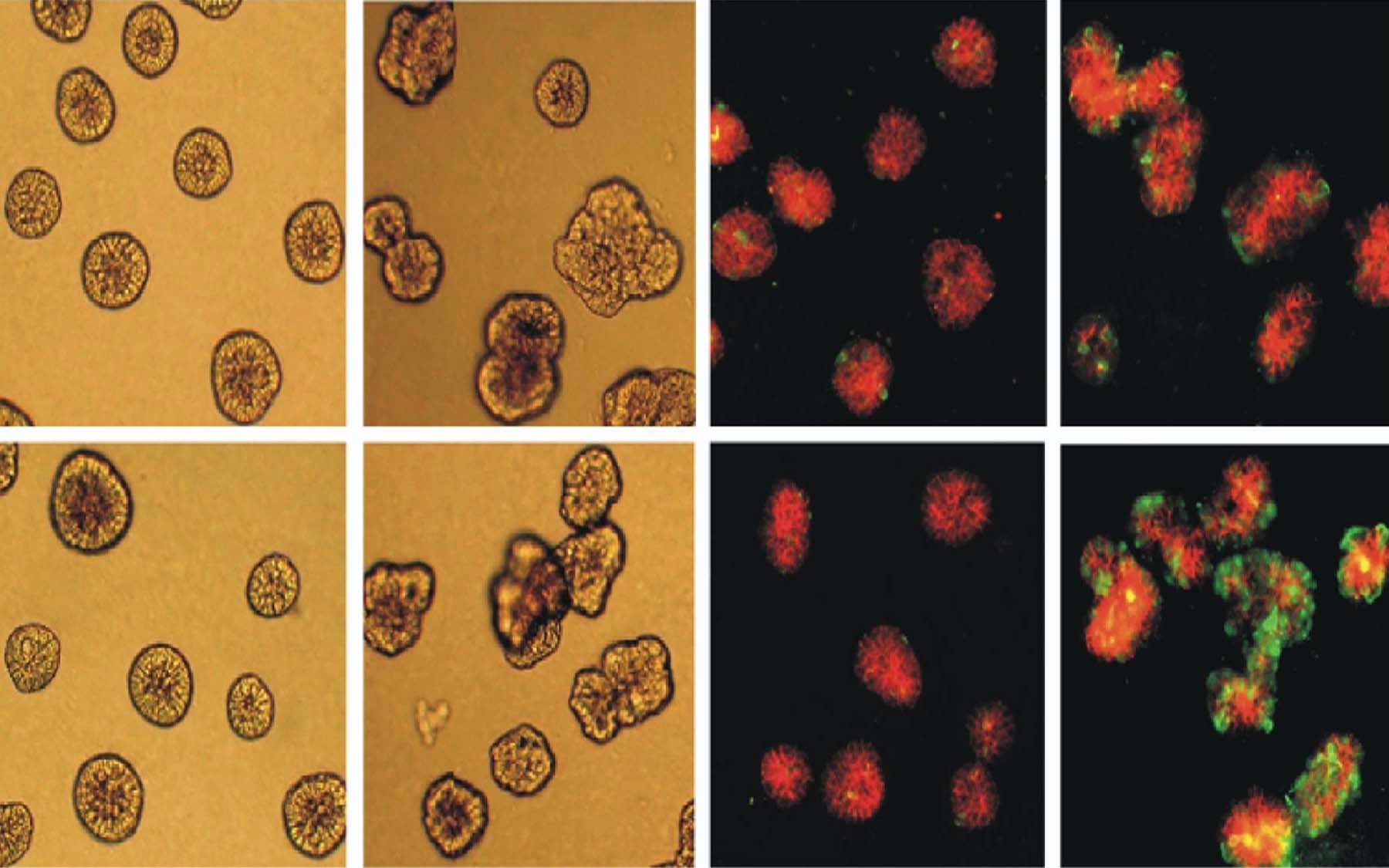 The enzyme target, Brk, is shown to be an accelerator of HER2-positive tumors

Cold Spring Harbor, NY — Tumor cells in a particular subset of breast cancer patients churn out too much of a protein called ErbB2—also often called HER2—which drives the cells to proliferate unchecked. Patients unlucky enough to be in this group—about one in four—have poorer prognoses and clinical outcomes than those who don’t.

The drugs Herceptin and Lapatinib, prescribed in combination with other chemotherapeutic agents, have improved this picture significantly, but leave plenty of room for improvement: they suppress ErbB2 but are effective against less than half of ErbB2-producing tumors. Moreover, patients with tumors that do respond usually develop resistance to these drugs.

A team of scientists at Cold Spring Harbor Laboratory has just published research identifying an enzyme called Brk that may serve as a target for future drugs developed to fight ErbB2-positive tumors. Brk, they report, helps these tumors become virulent and is also implicated in the process through which the tumors develop drug resistance.

The search for co-conspirators

“The limited success of existing therapy suggested to us that factors besides ErbB2, or proteins that collude with ErbB2, might nullify the effects of Herceptin and Lapatinib,” explained CSHL Professor Senthil Muthuswamy, Ph.D., leader of the research team and corresponding author of the paper, published online August 21 ahead of print in Proceedings of the National Academy of Sciences.

In the hunt for ErbB2’s co-conspirators, Dr. Muthuswamy’s team focused on Brk, which they knew to be over-produced in many other types of cancer, including two-thirds of all breast cancers. A detailed analysis of changes that occurred in the genomes of a sample of breast cancer patients helped the group confirm that the expression of ErbB2 and Brk was directly linked.

By forcing the production of both ErbB2 and Brk within the same cell, they determined how Brk enhances ErbB2 activity and fortifies tumor cells against ErbB2-targeting drugs. “Our results might explain why the strategy of using ErbB2 inhibitors alone to treat breast cancers has fallen short,” noted Dr. Muthuswamy. “These findings may also suggest a way to treat patients with advanced ErbB2-positive tumors and those who’ve developed resistance to ErbB2 inhibitors—an idea that we’re eager to test.”

ErbB2 is a member of a family of enzymes called receptor tyrosine kinases—cell-surface molecules that goad cells into proliferating when they sense growth cues in the environs of cells that express them. It turns out that the over-production of ErbB2 in breast cancers is due to a gene mutation that results in the accumulation of multiple copies of the erbB2 gene.

Other genes that undergo such “amplification” due the duplication of DNA segments include brk, which is the gene that instructs cells to manufacture the enzyme Brk. This enzyme is absent in healthy cells but is found at high levels in a majority of breast cancers. As some of these cancers also over-express ErbB2, the CSHL team wondered whether the offending genes, erbB2 and brk, are mutated in tandem, or “co-amplified.” This idea, in turn, raised the possibility that the proteins encoded by these genes are also co-activated and feed into the same proliferation-promoting pathway.

The team checked breast cancer tissue from more than two hundred patients for variations in the number of copies of both genes and found that they were both amplified abnormally in a significant number of these samples. Re-analyzing the samples for the expression levels of both genes revealed that “co-amplified” genes were also “co-overexpressed”—they were the source of abnormally high levels of their corresponding proteins.

Brk acts as an accelerator of proliferation

Further experiments by Muthuswamy’s team revealed that although Brk does not induce cancerous proliferation on its own, it enhances the proliferation of cells that also express ErbB2 by speeding up their entry into the cell cycle. Proliferation in cancer is the result of the cell cycle gone out of control—beyond limits that healthy cells impose on their own multiplication.

Dr. Muthuswamy likened the cooperation between the Brk and ErbB2 proteins to that between factors that propel a car. “If ErbB2 is the accelerator that makes the car move, Brk helps shift the gear to gain more speed,” he explained.

How Brk is implicated in drug resistance

Aside from hurrying along tumor progression, Brk was also found to diminish the effectiveness of ErbB2-inhibiting drugs on tumor growth. This finding reinforces the need for combination therapies. “We might need to hit ErbB2-expressing cancers with drugs against both ErbB2 and Brk,” said Muthuswamy.

Brk-inhibitors might also be useful on their own. The CSHL scientists speculate that these drugs might fight tumors that never react to or become resistant to ErbB2-inhibitors.

Targeting Brk is also a safe strategy, according to the scientists, because “Brk does not promote the proliferation of normal cells, and its expression in normal tissues is restricted to non-proliferating cells.” Inhibiting this protein might thus “produce fewer unwanted side effects than (targeting) other cancer-promoting proteins” which may be present in larger numbers.

The scientists have also thought up other ways of putting their discovery of the role of Brk in cancer progression to good use. “We also think that Brk would be an ideal clinical marker than could be used to provide both a diagnosis and prognosis for breast cancer,” said Dr. Muthuswamy.