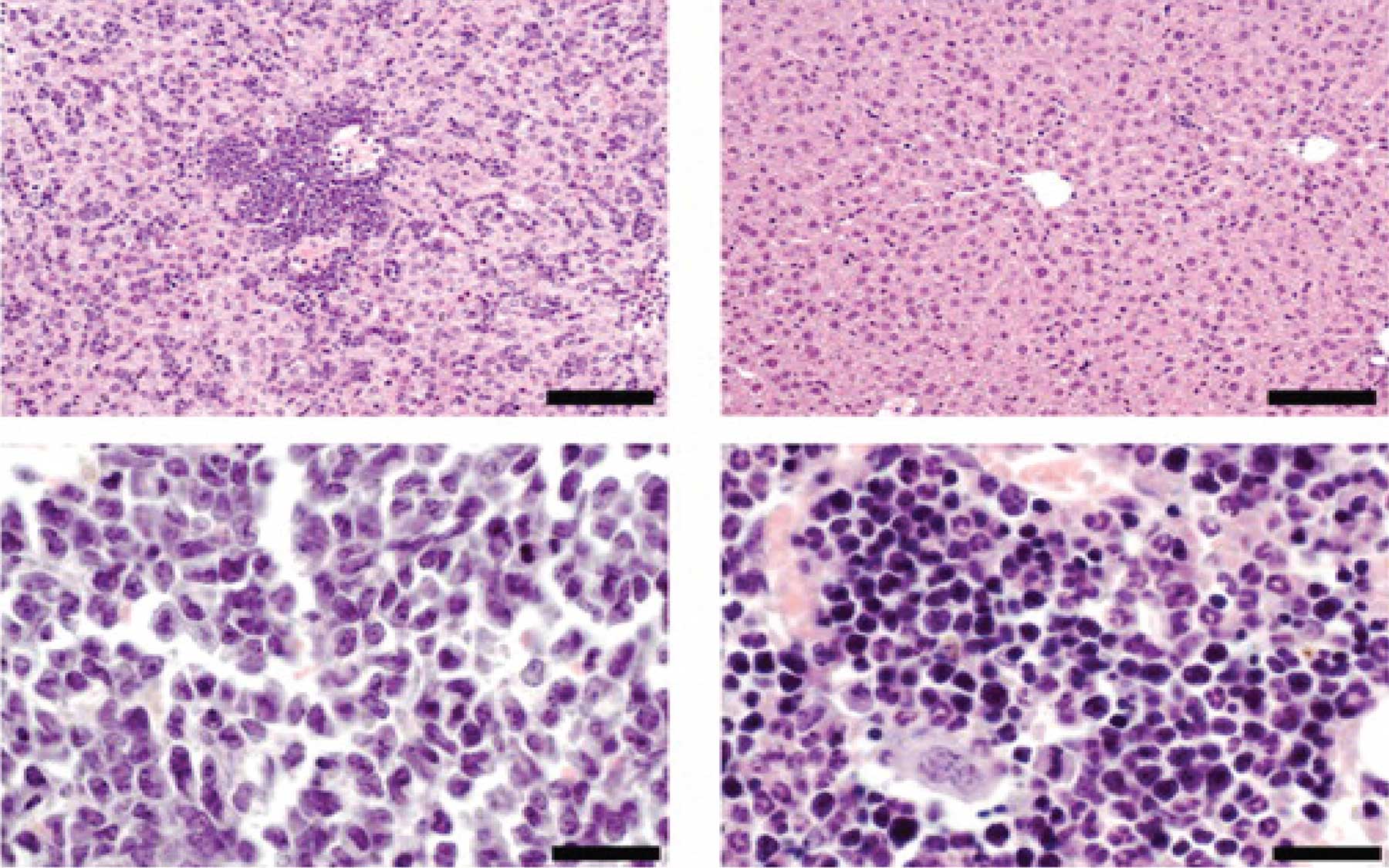 Cold Spring Harbor, NY — A team of scientists at Cold Spring Harbor Laboratory (CSHL) has laid bare the mechanism behind a phenomenon called oncogene addiction in mice suffering from a form of leukemia that mimics acute myelogenous leukemia (AML) in humans. Significantly, the team was able to mobilize their newly gained understanding to target “addiction” pathways in the model mice, resulting in rapid and complete eradication of cancer, which is usually fatal and resistant to conventional chemotherapy.

Oncogene addiction refers to the curious phenomenon that cancer cells, despite harboring many genetic alterations, can remain dependent on the continuing expression of a single aberrant, cancer-promoting gene—an oncogene. In this case, the gene in question, called MLL, has long been implicated in human cancers of the blood. In AML, as a result of a genetic anomaly, the protein expressed by the MLL gene fuses with another protein, to form a fusion oncoprotein called MLL-AF9. It is this protein to which AML cancer cells are “addicted.”

“The crucial questions are what MLL-AF9 enables cancer cells to do, and how we might intervene to suppress these effects—in other words, how to use our knowledge of the mechanism behind the cancer cell’s addiction for developing highly specific anti-cancer therapies.,” says CSHL Adjunct Professor and HHMI Investigator Scott W. Lowe, who directed the research, which is reported in a paper that appears August 1 in the journal Genes & Development. “Until now, we’ve not been able to answer these questions in living animals.”

The team’s research demonstrated that MLL-AF9 enforces a cellular program that enables blood cells to keep renewing themselves, rather than progressing through the usual stages of cellular life, and eventually dying. While this property of aberrant self-renewal has been a known characteristic of leukemia cells for many years, Lowe and his CSHL colleagues were able to decipher the underlying genetic program in unprecedented detail. The central player orchestrating these cancer-specific self-renewal programs was found to be Myb, a protein known to regulate normal blood cell production that previously also has been implicated in certain subtypes of leukemia.

“MLL-AF9 apparently ‘hijacks’ Myb to enforce a program of aberrant self-renewal,” explains Amy Rappaport, who was a co-first author on the paper, with Johannes Zuber. The team also included Christopher Vakoc, a CSHL Fellow, among others. “The consequences of inhibiting Myb in established leukemia were striking,” says Zuber. “Following Myb suppression, mouse leukemia cells invariably lost their aberrant self-renewal ability, resumed their normal cell fate, maturing into white blood cells, and eventually got eliminated.” As a consequence, mice harboring this aggressive and chemotherapy-resistant form of AML were cured by inhibiting Myb. The protein’s suppression had no adverse impact upon normal white blood cells.

To identify and study genes that are specifically required in cancer cells, the researchers took a systematic approach that demonstrates the power of a series of technological advances made by Lowe’s group in concert with several other groups at CSHL. These advances play an important role in CSHL’s new Cancer Therapeutic Initiative. The Initiative aims to rapidly identify new therapeutic targets and validate them in mouse models specific for genetic subtypes of human cancer.

In the paper published today, Lowe’s team first implemented a rapid strategy to introduce common human AML mutations in mice so that they closely mimicked human AML, both in terms of symptoms and response to treatment. These genetically reprogrammed mice are called “mosaic mice.”  As a next step, the team used a genetic switch to inactivate the oncogene that gives rise to the “addictive” MLL-AF9 oncoprotein. When MLL-AF9 was suppressed in living mice, the cancers shrank and were soon eliminated altogether from all affected organs. This result confirmed the cancer cells’ addiction to MLL-AF9, and provided a unique system to reveal the underlying genetic networks.

To further explore components of these networks, the team used RNA interference, or RNAi, an experimental tool to suppress gene function, which in prior work they had adapted for use in animal models. These recent advances now provide a means to switch off virtually any gene in an established cancer, and thereby enable the identification and evaluation of new potential drug targets. While the current study focused on the dramatic effects of suppressing Myb in AML, the approach validates a general method for understanding oncogene addiction in vivo that can be applied in other cancer types.

The RNA interference technique used in the experiments to block Myb is not applicable in humans, for a variety of still-daunting technical reasons. The hope is to find a small molecule that specifically targets the Myb protein, which can be the basis for a human drug. None has yet been developed, although the search is on.

But, says Lowe, “our results show that suppressing a single mediator of aberrant self-renewal can re-establish pre-existing cell-fate programs and eliminate aggressive AML. This suggests that pre-existing cell-fate programs remain hard-wired even in cancer cells, and raises our hope that agents that inhibit these programs will be less prone to resistance mechanisms that prevent targeted therapies from producing a lasting effect in other cancers.”

This work was supported by a Specialized Center of Research Grant from the Leukemia and Lymphoma Society, the NIH, and generous gifts from the Don Monti Memorial Research Foundation. Other support was obtained from the German Research Foundation, the Andrew Seligson Memorial Fellowship at CSHL; the Barbara McClintock fellowship; the Leslie Rutherford Leukemia and Lymphoma Society Scholarship; the Cold Spring Harbor President’s Council; and the Howard Hughes Medical Institute.