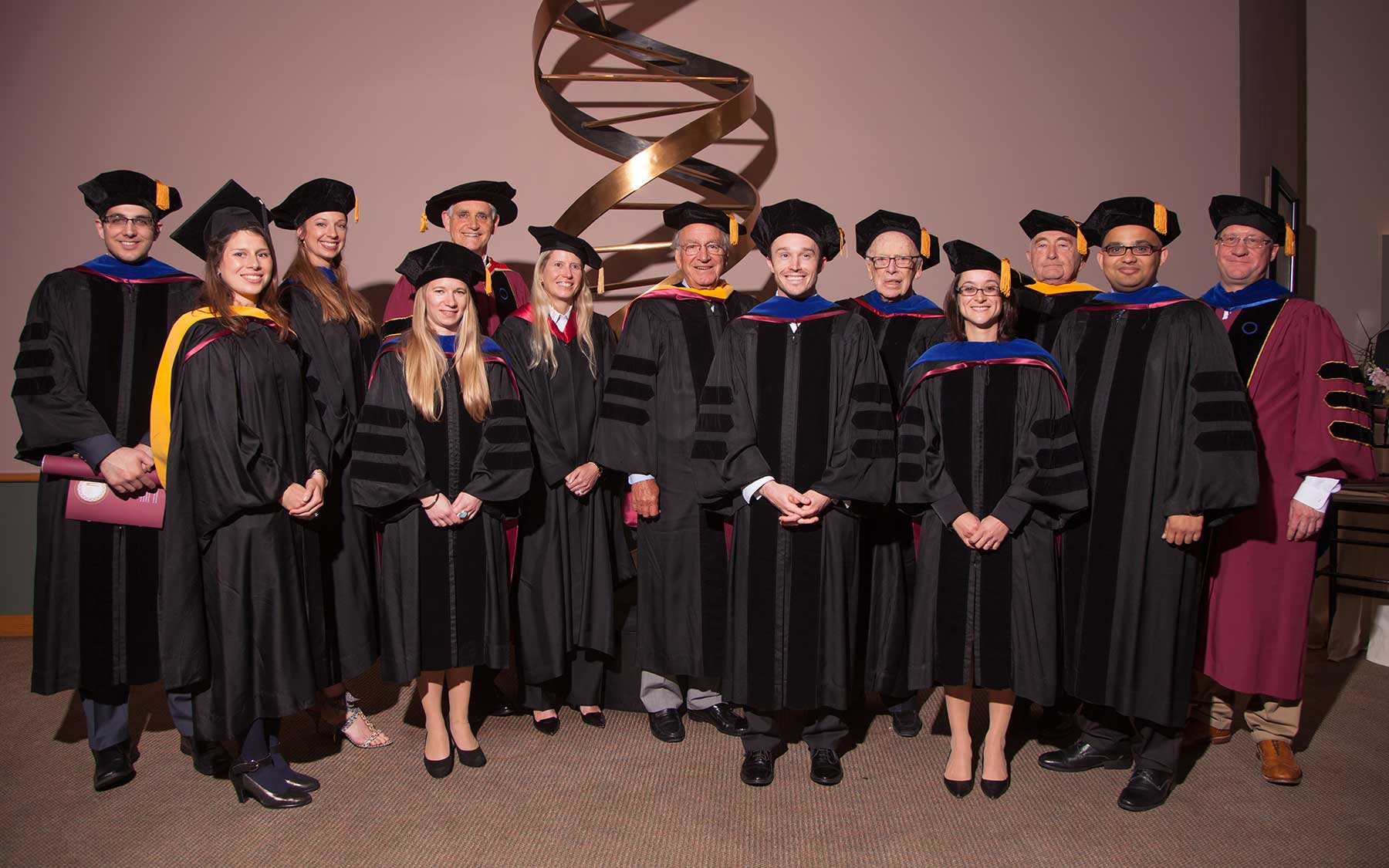 Cold Spring Harbor, NY — On Sunday, May 1, proud friends and family mingled with distinguished scientists at the 13th commencement ceremony of the Watson School of Biological Sciences at Cold Spring Harbor Laboratory (CSHL). Seven outstanding young scientists were awarded the degree of Doctor of Philosophy and honorary degrees were bestowed upon Senator Tom Harkin (retired) and John Tooze, Ph.D., F.R.S.

Jamie C. Nicholls, Chairman of the Laboratory’s Board of Trustees, addressed the graduating class, saying, “We are extremely proud of the Watson School’s many accomplishments, including its innovative curriculum, which is now emulated by many other institutions, and its impressive faculty of leading biomedical researchers.”

Attendees who gathered in CSHL’s Grace Auditorium were welcomed by Dr. Bruce Stillman, CSHL President and CEO, and by Dr. Alexander Gann, Dean of the Watson School.

“These students are proud products of our unique program in the life sciences,” said Dr. Gann. “We enable students to complete their Ph.D. degrees two years quicker than the national average, and this is a result of dedicated faculty who ensure that these exceptional students pursue science in a highly focused way.”

For the second time, Associate Professor Gurinder “Mickey” Atwal, a quantitative biologist, was honored with the Winship Herr Award for Excellence in Teaching. Named for the founding dean of the Watson School, the award is annually given to a teacher singled out by the school’s first-year students. This year’s commencement also featured the school’s conferral of honorary Doctor of Science degrees upon Senator Tom Harkin (retired) and Dr. John Tooze. Senator Harkin served as a United States Senator from Iowa from 1985 to 2015 and previously in the United States House of Representatives from 1975 to 1985. He was honored by WSBS as a powerful advocate for science—a leader in the making of science policy and staunch supporter of robust funding. Dr. Tooze served as Executive Director of the European Molecular Biology Organization (EMBO) from 1973-1994, where he was also the founding editor of The EMBO Journal, and collaborated with Dr. James Watson as co-author on The DNA Story. WSBS recognized Dr. Tooze as a leader in the administration and communication of science.

In his keynote address, Senator Harkin spoke of the great value of scientific research to society. Citing the example the Human Genome Project, he noted that government’s investment of $3.4 billion had generated $965 billion in economic activity by 2012, as well as $293 billion in personal income and some 4.3 million job-years of US employment.

“Our country, indeed the entire world, owes a great debt to Dr. James Watson for his vision and leadership in the Human Genome Project,” Senator Harkin said. Watson was the project’s first director and was instrumental in winning funding and political support for it. “The concept and feasibility of sequencing the human genome started right here at Cold Spring Harbor Laboratory,” Senator Harkin noted. “Thank you, Dr. Watson, for what you’ve done for our country!”

Senator Harkin went on to express his “great concern” about a reduction in funding for the National Institutes of Health, whose budget in real terms “is 19% below where we were in 2003.” The US, he said, has in fact reduced its investment in science as a percentage of GDP since 2010—”the only one among the top 10 leading countries in the field to do so.” He said there was “a clear and present danger that the US will lose its leadership in basic research in the years ahead” if the trend continues. “We must put a stop,” he urged, “to the growth of the tumor of anti-intellectualism and anti-science in our body politic.”

CSHL works to improve communication with PSEG on outages