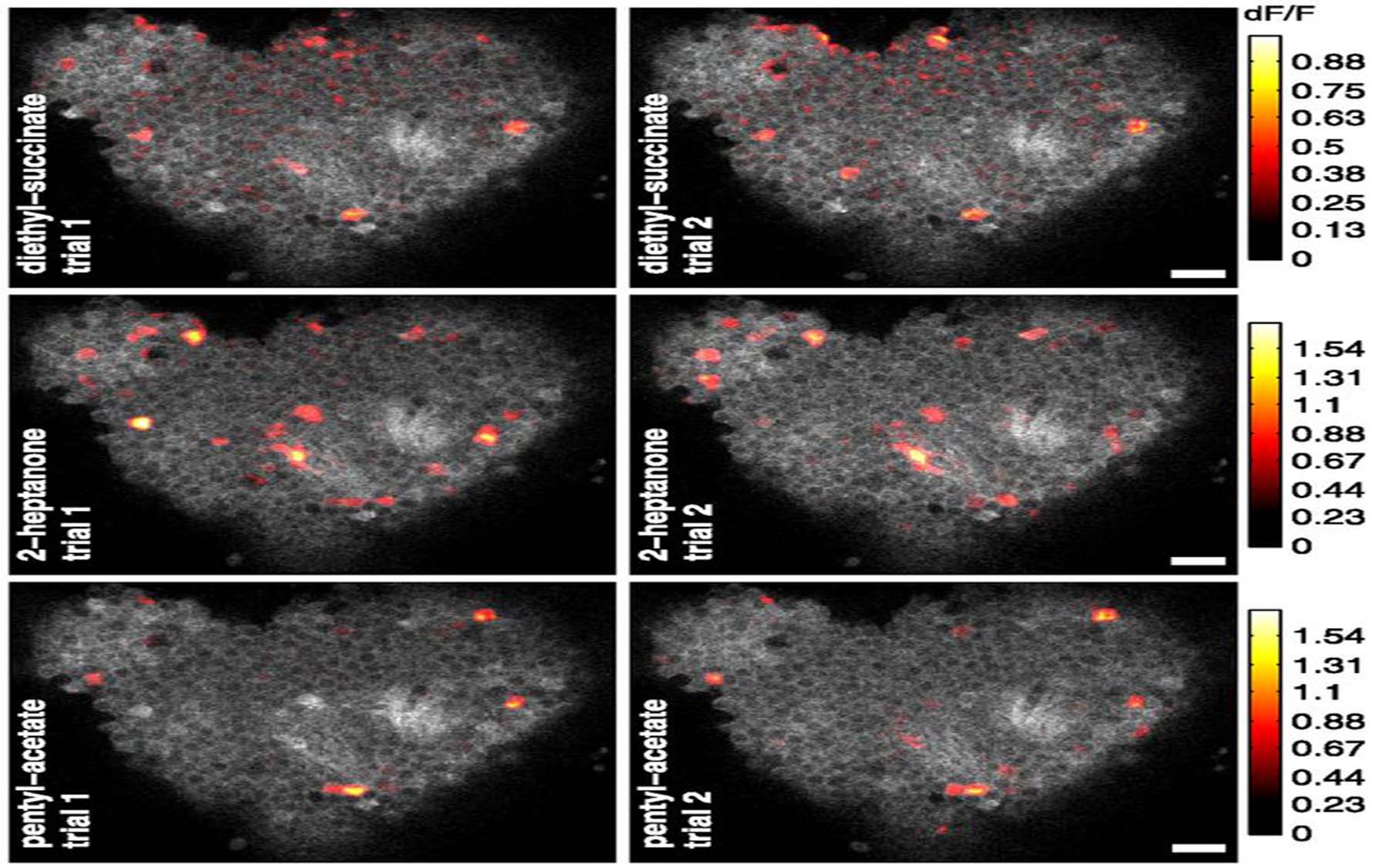 Cold Spring Harbor, NY — Behind the common expression “you can’t compare apples to oranges” lies a fundamental question of neuroscience: How does the brain recognize that apples and oranges are different? A group of neuroscientists at Cold Spring Harbor Laboratory (CSHL) has published new research that provides some answers.

In the fruit fly, the ability to distinguish smells lies in a region of the brain called the mushroom body (MB). Prior research has demonstrated that the MB is associated with learning and memory, especially in relation to the sense of smell, also known as olfaction.

CSHL Associate Professor Glenn Turner and colleagues have now mapped the activity of brain cells in the MB, in flies conditioned to have Pavlovian behavioral responses to different odors. Their results, outlined in a paper published today by the Journal of Neuroscience, suggest that the activity of a remarkably small number of neurons—as few as 25—is required to be able to distinguish between different odors.

They also found that a similarly small number of nerve cells are involved in grouping alike odors. This means, for instance, that “if you’ve learned that oranges are good, the smell of a tangerine will also get you thinking about food,” says Robert Campbell, a postdoctoral researcher in the Turner lab and lead author on the new study.

These intriguing new findings are part of a broad effort in contemporary neuroscience to determine how the brain, easily the most complex organ in any animal, manages to make a mass of raw sensory data intelligible to the individual—whether a person or a fly—in order to serve as a basis for making vital decisions.

The neurons in the fly MB are known as Kenyon cells, named after their discoverer, the neuroscientist Frederick Kenyon, who was the first person to stain and visualize individual neurons in the insect brain. Kenyon cells receive sensory inputs from organs that perceive smell, taste, sight and sound. This confluence of sensory input in the MB is important for memory formation, which comes about through a linking of different types of information.

Kenyon cells make up only about 4% of the entire fly brain and are extremely sensitive to inputs triggered by odors, in which only two connections between neurons, called synapses, separate them from the receptor cells at the “front end” of the olfactory system.

But in contrast to other regions of the brain, such as the vertebrate hippocampus, the sensory responses in the MB are few in number and relatively weak. It is the sparseness of the signals in the Kenyon cell neurons that makes studying memory formation in flies so promising to Turner and his team. “We set out to learn if these signals were really informative to the animal’s learning and memory with regard to smell,” Turner says.

In particular, Turner’s group wanted to see if they could link these signals with actual behavior in flies. The team used an imaging technique that allowed them to view the responses of over 100 Kenyon cells at a time and, importantly, quantify their results. They found that even the very sparse responses in these cells that are triggered by odors provide a large amount of information about odor identity. Turner suspects the very selectiveness of the response helps in the accurate formation and recall of memories.

When the researchers used two odors blended together in a series of increasingly similar concentrations, they found that two very similar smells could be distinguished as a result of the activity of as few as 25 Kenyon cells. This correlated well with the behavior of the flies: when brain activity suggested the flies had difficulty discerning the odors, their behavior also showed they could not choose between them.

The activity of these cells also accounts for flies’ ability to discern novel odors and group them together. This was determined in a “generalization” test, in which the degree to which flies learned a generalized aversion to unfamiliar test odors could be predicted based upon the relatively similar activity patterns of Kenyon cells that the odors induced.

“Being able to do this type of ‘mind-reading’ means we really understand what signals these activity patterns are sending,” says Turner. Ultimately, he and colleagues hope to be able to relate their findings in the fly brain with the operation of the brain in mammals.

“Imaging a population code for odor identity in the Drosophila mushroom body” is published online in Journal of Neuroscience on June 19, 2013. The authors are: Robert Campbell, Kyle Honegger, Hongtao Qin, Wanhe Li, Ebru Demir, & Glenn Turner. The paper can be obtained online at doi: 10.1523.