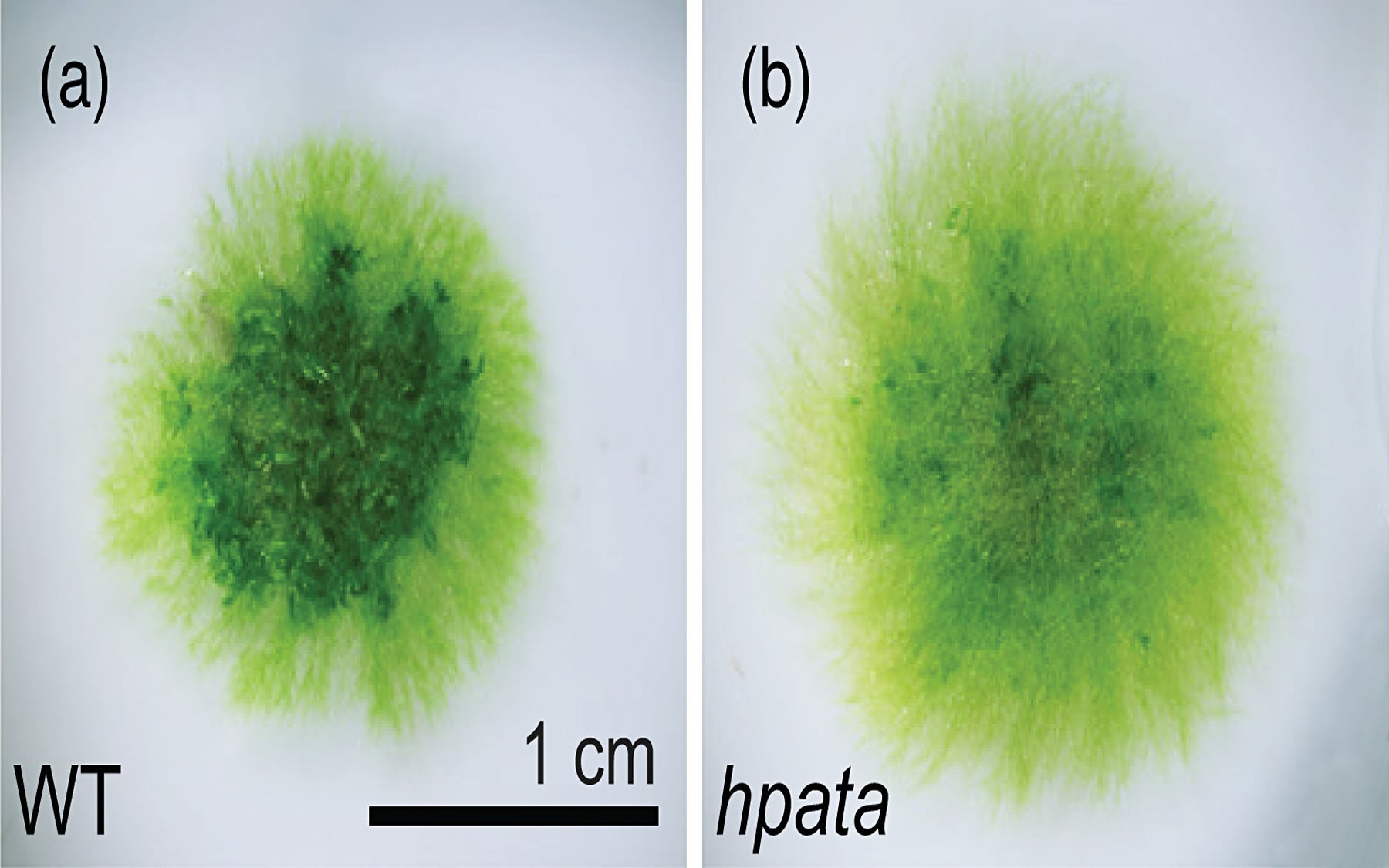 Cold Spring Harbor, NY — Adding a spoonful of sugar to coffee makes it sweeter, but in plants, researchers have discovered, the addition of sugar molecules to particular proteins plays a surprising variety of roles in basic developmental processes.

In work published today in The Plant Journal, a team of researchers led by CSHL Associate Professor Zachary Lippman investigated the role of certain evolutionarily conserved enzymes that add specific sugars to various proteins. Lippman and Cora MacAlister, Ph.D., lead author on the new paper, found that deleting the genes for these enzymes from the flowering mustard plant Arabidopsis thaliana and the moss Physcomitrella patens resulted in similar defects in both species, which are widely separated in evolutionary time.  Surprisingly, however, these defects caused part of one species to grow more rapidly and part of the other to grow less rapidly than normal.

“This demonstrates how important it is that proteins are decorated with these sugar molecules in different developmental contexts,” says Lippman. It has long been known that proteins can be modified by adding sugars to them, and that this addition can change the way proteins function. Lippman and his team have previously shown that a group of sugar-adding enzymes, called Hydroxyproline O-arabinosyltransferases (HPATs), control stem cell production in tomato plants. Plants lacking the genes to make HPATs grow more flowers and larger fruit, as if a natural brake on growth has been removed.

Lippman and MacAlister found that HPAT genes are also found across a wide variety of plant species, including in evolutionarily ancient plants such as mosses. “Plants at the base of the plant evolutionary lineage like moss don’t have the same tissues and organs as flowering plants, which evolved more recently, so the genes’ roles must be very different,” Lippman says. “We set out to explore those roles and did a comparative study between two plant species.”

Unlike in tomato plants, deleting the HPAT genes in Arabidopsis and Physcomitrella did not seem to affect stem cell production. “The big surprise was the fact that in Arabidopsis, we only saw a defect in the growth of pollen tubes, which are required for fertilization and seed production,” Lippman says. When the researchers looked in the moss, Physcomitrella, they saw defects in the growth of filaments that allow the moss to colonize neighboring soil.

Both effects are part of a process known as tip growth. This led Lippman’s team to propose that the ancient function of the HPAT genes is to control tip growth, which, Lippman says, is likely related to key proteins that are critical for forming cell walls.

Curiously, the researchers found that the absence of the sugar-adding HPAT genes had opposite effects on tip growth in the two species. In Arabidopsis, pollen tubes grew too slow in hpat mutants and were outcompeted by normal pollen tubes, whereas in the moss the affected filaments actually grew faster. The reasons for this surprising difference are still unclear, but it demonstrates that HPAT enzymes can have very different effects in different contexts.

“These enzymes are like ‘Jacks of all trades’,” says Lippman. “They do all sorts of targeting of different proteins in different developmental contexts,” he says. They are responsible for adding sugar molecules to numerous different types of proteins, whether it’s a cell wall, or it’s a small signaling peptide, which is what’s responsible for the phenotypes in tomato.”

In follow-up work, MacAlister, now leading her own research group at the University of Michigan, will try to identify the target of these sugar-adding enzymes in mosses and other similar plants. For his part, Lippman is planning to use mutations in HPAT genes to understand some of the other processes that they’re involved in. This could provide interesting insights, as the addition of sugars seems to be important for a wide variety of processes. “It’s really remarkable how important these seemingly simple sugar modifications are for growth and development throughout the plant kingdom,” says Lippman.

This work was supported by a Gordon and Betty Moore Foundation Grant GBMF 2550.01 (Life Sciences Research Foundation) and an Agriculture and Food Research Initiative competitive grant (2015-67013-22823) of the US Department of Agriculture National Institute of Food and Agriculture.

“Hydroxyproline O-arabinosyltransferase mutants oppositely alter tip growth in Arabidopsis thaliana and Physcomitrella patens ” appears online in The Plant Journal on November 18, 2015. The authors are: Cora A. MacAlister, Carlos Ortiz-Ramírez, Jörg D. Becker, José A. Feijó and Zachary B. Lippman. The paper can be obtained online at: http://onlinelibrary.wiley.com/doi/10.1111/tpj.13079/full