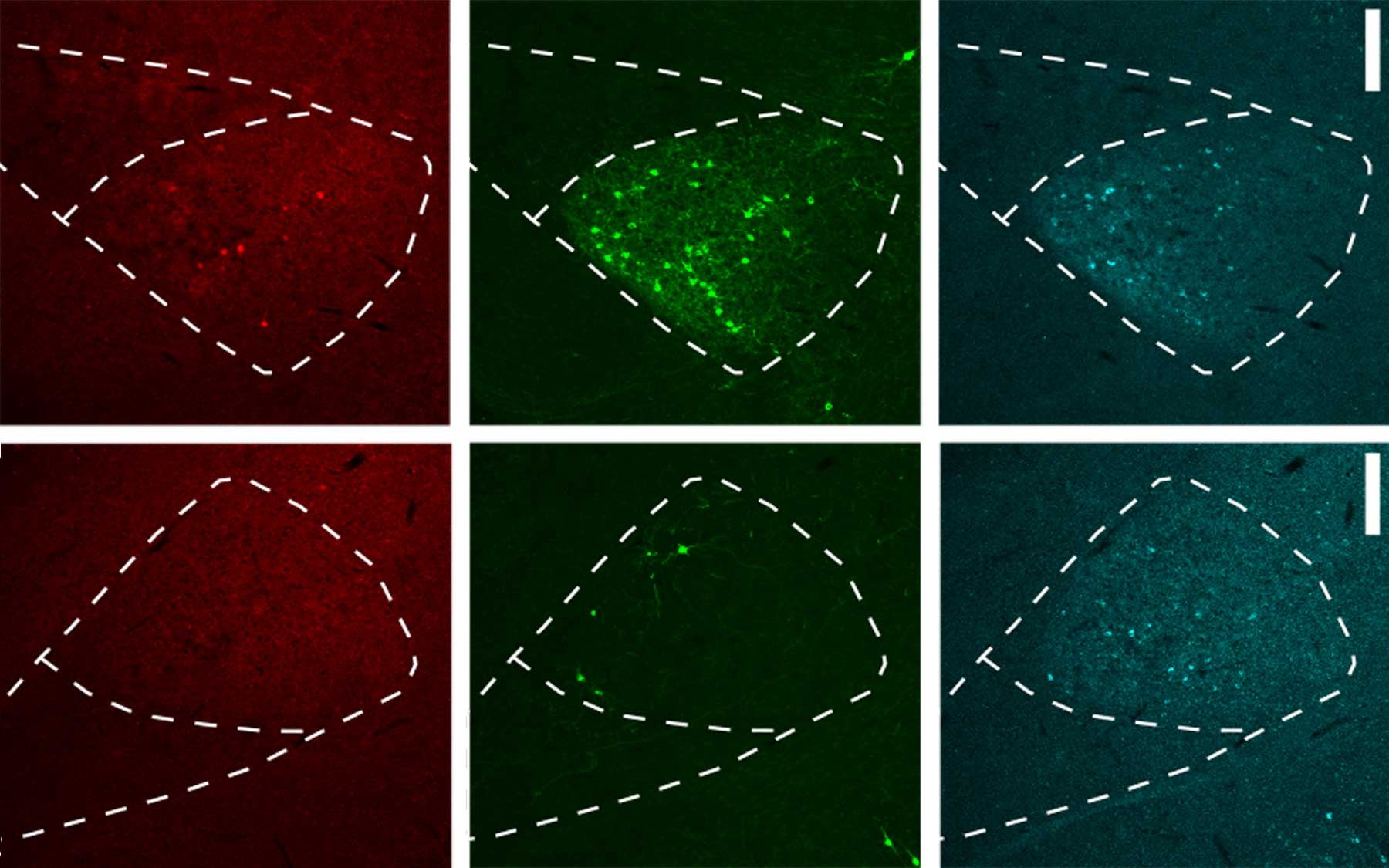 These images demonstrate the increased efficiency of the improved retrograde viral tracing method introduced by the Kepecs lab at CSHL. While in one register, a classic tracer (bottom right) performs about as well as the improved one (top right), the improved tracer records neurons far more robustly (top middle) in a different register (green dots). Both tracers were injected in the same place and traced neuronal connections between the basolateral amygdala and the medial prefrontal cortex.
email envelop icontwitter icon share buttonfacebook icon share buttonlinkedin icon share button

Researchers have improved an important technology used to map neural circuits in the brain. The method, next-generation retrograde viral tracing, can be used in all cell types to relate the connectivity of specific types of neurons to the functions they perform.

Cold Spring Harbor, NY — New technologies have been likened, famously, to magic. At first, even the few who understand how they work have a tendency to sit back and marvel. Soon, flaws and limitations are detected and the invention process begins again, resulting, almost always, in improvements.

Today a team led by Professor Adam Kepecs at Cold Spring Harbor Laboratory (CSHL) describes in the journal Neuron a technology that improves on one that only a decade ago seemed magical—but alas, does no longer. Both technologies have the aim of enabling neuroscientists to relate the connectivity of specific types of neurons to the functions they perform—for instance, while an animal is performing a behavioral task. The new technology is an important improvement, however, making new things possible.

Being able to scrutinize structure/function relationships in different areas of the brain has been a huge step forward in learning basic principles that enable the brains of mammals, including us, to make sense of the world. About a decade ago, a new method called retrograde viral tracing was introduced. The technique exploits the ability of certain viruses to hijack a neuron in the brain—entering it at a place adjacent to where it connects with other neurons and traveling backward, along its threadlike axon, to the main body of the cell, called the soma. Retrograde tracing has been a boon to the field because it has helped researchers draw links between the functions of neurons located in widely separated brain areas.

These retrograde viruses are “frankly bizarre, real oddballs,” says Kepecs, “but incredibly useful. At this point, however, our field has matured and we now need them to do things they can’t always do.”

The problem is simply put: retrograde viruses often work, but sometime don’t. A researcher trying to trace a long-distance circuit may run into the problem of “tropism,” which is the inability of the virus to infect certain types of neurons. Since tropism is common, negative results are hard to interpret: is there no connection (i.e., neural pathway), or did the retrograde virus simply fail to infect the target neuron?

Kepecs’ team, led by Dr. Shujing Li, has come up with an improved version of retrograde tracing that eliminates the problem of tropism. The solution, called “receptor complementation,” centers on the concept of forcing the target cell to express a receptor that can interact with the virus and allow its entry. “It’s a little like we’re going around changing the locks on all the doors.” says Kepecs, “They’re still locked, but now we have all the keys.”

The team at CSHL successfully tested the method on a variety of neural circuits in both rats and mice, and showed that their method successfully reconstructed circuits that were lost to other methods. Finally, they engineered their viruses to express tools for controlling and recording neuronal activity – ensuring that the magic of retrograde tracing would continue for another day.

Researchers have improved an important technology used to map neural circuits in the brain. The method, next-generation retrograde viral tracing, can be used in all cell types to relate the connectivity of specific types of neurons to the functions they perform.