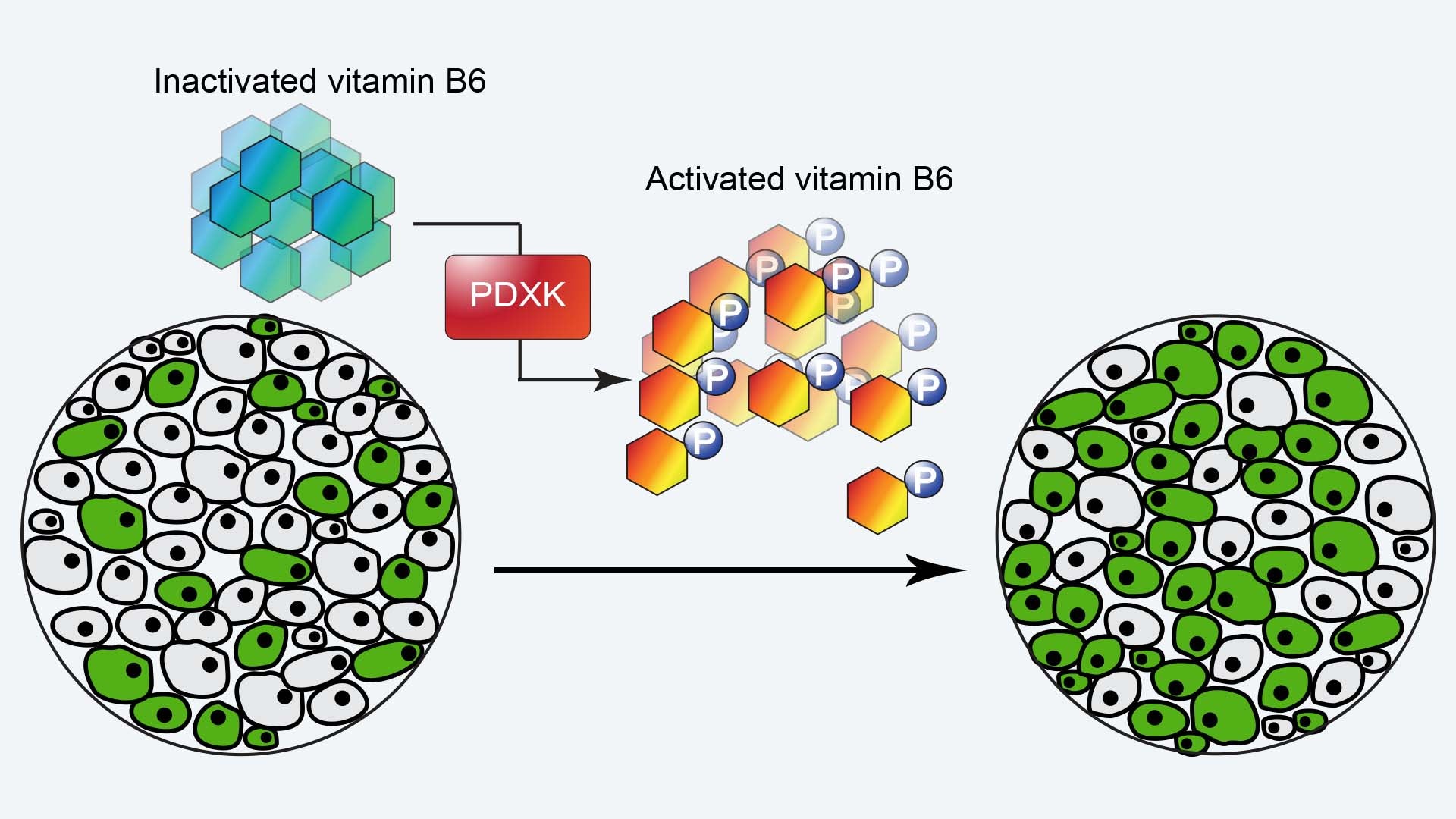 The PDXK enzyme manages the activity of B6, activating it when it is time for cells to divide. In AML, cancerous cells (green) can take advantage of this, quickly increasing their numbers.
email envelop icontwitter icon share buttonfacebook icon share buttonlinkedin icon share button

Researchers from CSHL and Memorial Sloan Kettering Cancer Center have discovered how Acute Myeloid Leukemia is addicted to vitamin B6. Now that researchers know this, they can pursue new treatment options for the deadly blood cancer.

Scientists have discovered that Acute Myeloid Leukemia (AML) grows by taking advantage of the B6 vitamin to accelerate cell division. The research team from Cold Spring Harbor Laboratory (CSHL) and Memorial Sloan Kettering Cancer Center (MSK) suggest they could halt the growth of this cancer by limiting its ability to manipulate the enzyme that pushes B6 to make proteins essential for cell division. It’s an approach to attacking cancer without harming healthy cells, which need the B6 vitamin to survive.

Currently, only one-third of AML patients will survive five years after diagnosis. That’s because, like many other deadly cancers, the cells involved in this aggressive form of blood cancer can divide and spread faster than most treatments can kill them.

CSHL Fellow Lingbo Zhang wanted to know how AML can achieve such rapid growth, so he looked closely at the genes of the disease’s cancerous white blood cells.

“We found more than 230 genes that are very active in leukemic cells and then we tested them, one by one,” he explained.

Using CRISPR gene-editing technology, Zhang’s lab shut down the activity of each of these 230 suspect genes to see if their absence would stop the cancer cells from proliferating. Among the hundreds of genes they tested, one pattern emerged. The gene which produces PDXK, the enzyme that helps cells use vitamin B6, proved most important for the growth of the cancer.

Scott Lowe, a former CSHL fellow and currently the chair of the Cancer Biology and Genetics program at MSK, said “while the action of certain vitamins has previously been linked to cancer, the specific links between vitamin B6 identified here were unexpected.”

The B6 vitamin is crucial to cell metabolism, producing energy and other resources important for cell growth. In a healthy cell, the PDXK enzyme manages the activity of B6, making sure that the vitamin does the job when needed. Because normal cells don’t actually divide all the time, the PDXK enzyme isn’t always pushing the B6 vitamin to be active.

It’s a different dynamic in cancer cells, which divide more frequently than normal cells. In AML cells, Zhang saw that the PDXK enzyme was always pushing B6 activity.

What this shows is that, “leukemic cells are addicted to vitamin B6,” he said. “You can call it a vulnerability of the cancer.”

Zhang and his colleagues say the next step is to develop a drug that specifically blocks leukemia from activating the PDXK enzyme. By manipulating the way the enzyme manages the activity of B6, a drug could slow or even stop the growth of cancerous cells without the profound side effects that would result from completely eliminating B6 from healthy cells. With the help of medicinal chemists, the team is now exploring this route.

Researchers from CSHL and Memorial Sloan Kettering Cancer Center have discovered how Acute Myeloid Leukemia is addicted to vitamin B6. Now that researchers know this, they can pursue new treatment options for the deadly blood cancer.

One thought on “Vitamin B6, leukemia’s deadly addiction”