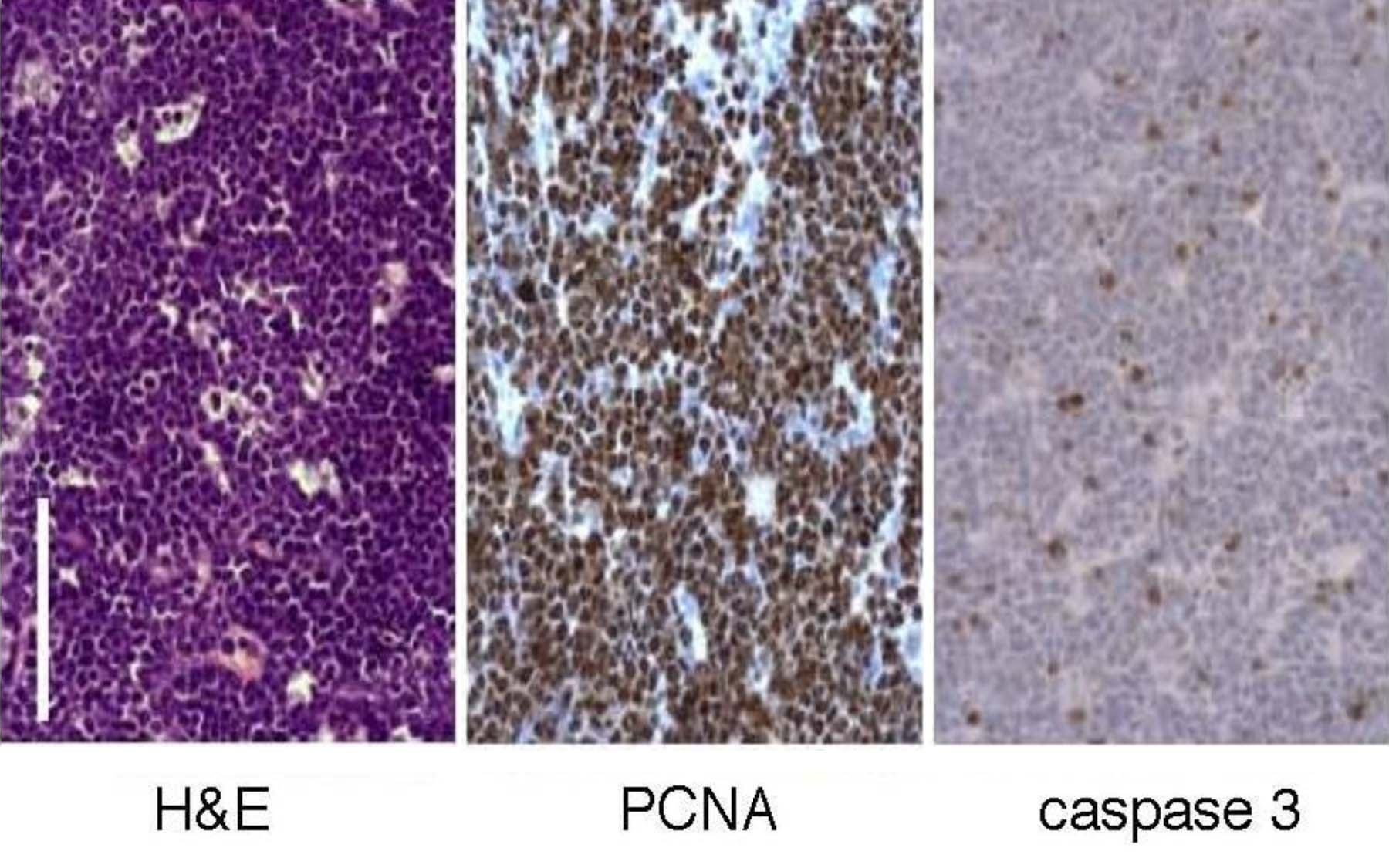 Cold Spring Harbor, NY — Researchers from Cold Spring Harbor Laboratory (CSHL) have uncovered a large, new cache of genes that act as built-in barriers against cancer. Known as tumor suppressors, the newly identified genes and the insight that they provide into devising new therapeutic strategies against lymphoma are described in a paper published this week in Cancer Cell.

The CSHL team’s discovery stems from their use of a powerful technology called RNA interference (RNAi), which suppresses gene activity. The scientists employed RNAi to screen hundreds of candidate tumor-suppressors in living mice, using small hairpin-shaped RNA (shRNA) molecules that attach to specific genes with exquisite specificity and switch them off. In the newly reported experiments, this process revealed more than 10 genes whose deactivation accelerates the development of deadly lymphomas—tumors of the immune system—in the mice.

The findings of this study are a vital complement to genomics approaches to map the “cancer genome,” the altered DNA sequence of cancer patients. “While this strategy will help build a catalog of every genetic mutation lurking within a cancer cell’s DNA, our approach offers functional information, such as which genes are causally involved in promoting cancer—knowledge that can be exploited to design better, targeted therapies,” said Professor Scott Lowe, Ph.D., who led the CSHL study.

The study is one of the few RNAi-based screens that have been carried out in living animals to date. Most large-scale RNAi-based screens hunt for cancer genes in cells grown in culture plates, a system that doesn’t take into account the myriad genetic and environmental factors that affect tumor growth inside living organisms.

Lowe’s team, in contrast, has developed animal models in which tumor-initiating cells are embedded among normal cells, giving rise to tumors within weeks. To create these so-called “mosaic” mice, stem and progenitor mouse cells that would eventually develop into mature blood cells are engineered to overproduce a cancer protein such as Myc. The altered cells are then injected into healthy adult mice. In this setting, the Myc alteration alone isn’t sufficient to cause cancer, but spurs tumors when combined with an additional trigger, such as the loss of a tumor suppressor gene.

Rather than hunt for tumor suppressors among all 20,000 to 25,000 genes in the human genome, the scientists focused on a smaller but likelier cast of suspects—the “Cancer 1000” library. This is a list that includes both pro- and anti-cancer genes that was compiled from previous studies and datasets documenting changes in gene activity levels in cancer cells versus normal cells.

Lowe and colleagues individually switched off each of the “Cancer 1000” genes using shRNA molecules corresponding to these genes. The shRNAs, which are part of an RNAi library developed by CSHL Professor Gregory Hannon’s group, were added to the progenitor cells that already carried a Myc gene mutation. The cells were then injected into mice, which were monitored for the development of lymphomas.

Mice that received altered cells in which a gene that prevents tumor growth had been “silenced” by an shRNA rapidly developed lymphomas, some of which appeared within a month. By isolating genetic material from the tumors and analyzing it, the scientists were able to pinpoint and validate more than 10 new genes as tumor suppressors.

“This approach to screen for tumor suppressors is relatively unbiased,” said CSHL postdoc Uli Bialucha, one of the authors of the new study. “We’ve not only mimicked the natural process by which the many fail-safe mechanisms controlled by tumor suppressors are bypassed, but have also sped it up.”

For tumor suppressors, context is key

Although further studies will be needed to determine how each of the identified genes acts to suppress tumor growth, the team’s powerful screen has already revealed some important lessons about tumor growth that will impact how cancer therapies are designed.

The team has found, for example, that a tumor suppressor gene doesn’t have to be completely “lost” for tumors to take root. Even the partial loss of function in certain tumor suppressors, such as the newly identified rad17 gene, can accelerate tumor growth. The team’s findings on activity of Rad17, the protein encoded by the gene of the same name, are borne out by clinical data that indicate poor prognosis for lymphoma patients who have decreased levels of Rad17.

“These findings imply that genes can act as pro- or anti-cancer genes depending on genetic or cellular context,” said Lowe. Such information has potentially great therapeutic value, as future treatments aimed at downgrading the activity of such a gene might succeed against only some tumor types.

“Drugs that inhibit Mek1 protein are now in clinical trials, but our study now shows that by inhibiting it, you might accelerate tumor growth. A better option might be to limit the use of these drugs only to patients who have Ras but not Mycmutations,” Lowe explained.

The CSHL team’s high-throughput screening strategy to functionally identify cancer genes has thus not only provided insights into cancer development but has also pointed the way toward therapeutic refinements. The team is planning a broader RNAi-based screen that will expand into other tumor models.