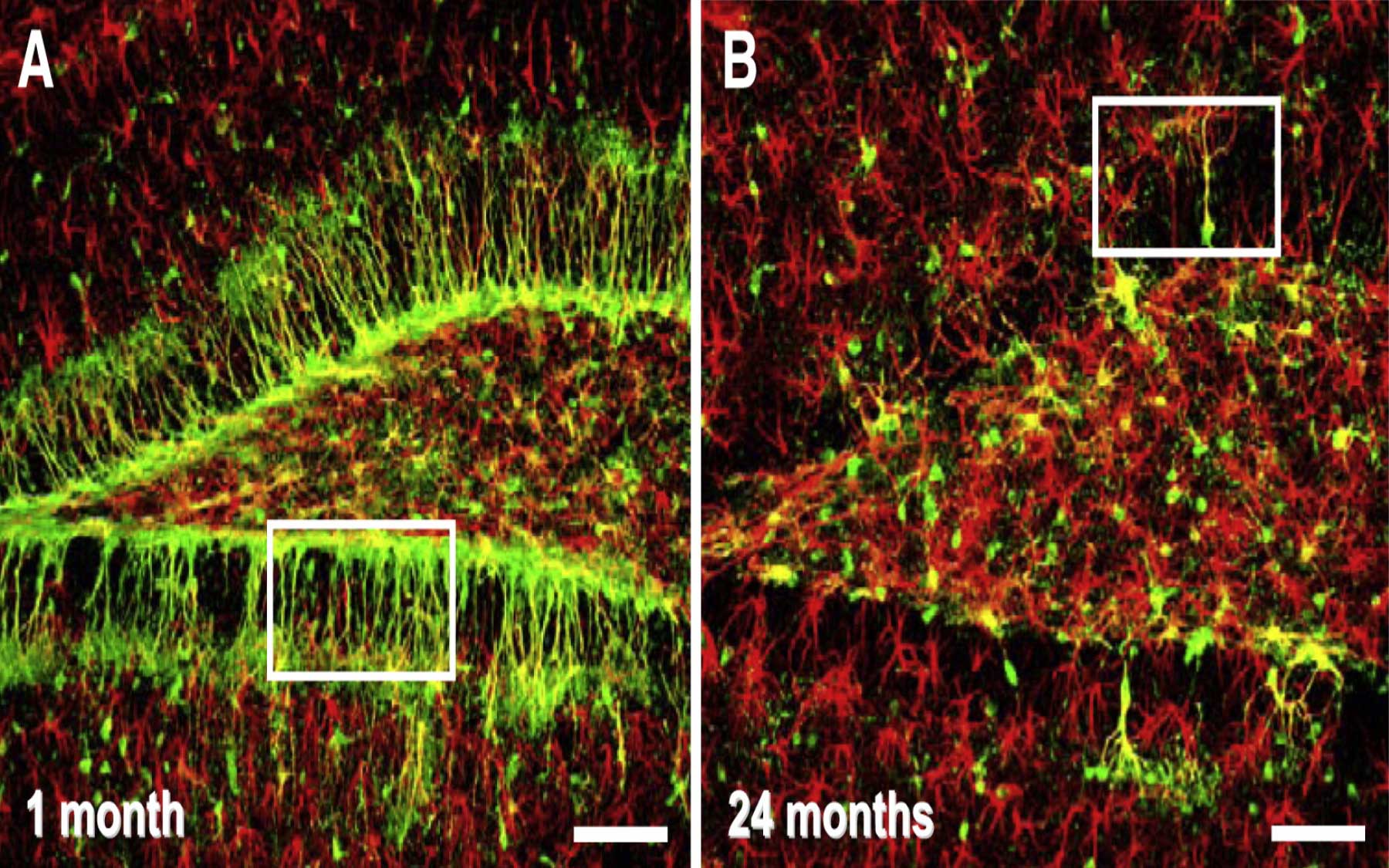 Cold Spring Harbor, NY — A new study from Cold Spring Harbor Laboratory (CSHL) offers an explanation for why our brains produce fewer and fewer neurons with age, a phenomenon thought to underlie age-related cognitive decline. The study, published as the cover story in the May 6 issue of Cell Stem Cell, suggests that this drop in production is due to the shrinking cache of adult stem cells in our brains.

“It’s only recently that scientists have found hard evidence for the importance of new neuron production in the adult brain’s hippocampus, a region critical for memory and cognitive function,” explains Associate Professor Grigori Enikolopov, Ph.D., who led the CSHL team. The new neurons are critical for some facets of memory—for instance, when similar events need to be memorized as separate episodes—and for the response to anti-depressant therapies and repair after brain injury.

“That the production of new neurons declines with age is well established, but why this happens has been a matter of debate,” Enikolopov says. One prevalent idea has been that the population of adult stem cells—which differentiate into a cascade of progenitor cells that ultimately give rise to mature neurons—remains stable, but the stem cells gradually lose their ability to produce neurons. Working with a genetic and molecular “toolbox” that they developed, Enikolopov’s group now proposes a different reason for the production drop-off.

In the team’s toolbox are genetically engineered lines of mice in which different classes of neural cells such as stem and progenitor cells can be visually identified and counted, because they are tagged with different fluorescent colors. Postdoctoral researcher Juan Encinas, Ph.D., and the rest of Enikolopov’s team could thus “quantitatively assess how the various populations of cells in the brain changed with age.”

Between one month and two years of age—a mouse’s normal life span—the scientists observed a 100-fold decrease in the number of brain stem cells. The rate of this decrease slowed with age, but the output per cell—measured as the number of progeny each cell gives rise to—increased, which Enikolopov says might be a strategy to cope with the loss of stem cells.

While the scientists in Enikolopov’s lab used genetic and molecular labeling methods to track division of the adult stem cells and trace the lineage of their progeny, computational biologist and CSHL Associate Professor Alexei Koulakov generated a mathematical model based on data produced by the team’s experiments. These various approaches all converged to focus on a single conclusion: a unique mode of stem cell regulation in the brain that differs from the conventional model.

Blood stem cells, for example, go through many cycles of self-renewal followed by quiescence—periods of inactivity—and their numbers do not decline with age. Enikolopov’s group found that in contrast, the adult stem cells in the brain remain quiescent for a prolonged time until they are activated. They then undergo a series of rapid divisions that give rise to progeny that differentiate into neurons. After that, the stem cells abandon their “stemness” by differentiating into astrocytes, a type of non-neural “helper” cells.

“This implies that each adult brain stem cell is used only once and hence is disposable, as opposed to stem cells in the blood or gut that self-renew many times during the lifespan,” explains Enikolopov. Whether the stem cells that have converted into astrocytes in the aging brain can be enticed to revert to their former identity and be recruited back into the stem cell pool is a question that his team is pursuing.

The results clarify other questions about the consequences of inducing neuronal production. Drugs such as Prozac and even forms of exercise such as running are known to spur neuron generation. “Having the ability to produce new neurons is obviously good,” says Enikolopov. “But since adult brain stem cells seem to follow a ‘use it and lose it’ rule, does activating neuronal production too much exhaust the stem cell pool prematurely?”

The answer depends on how the production of new neurons has been induced, according to Enikolopov. Whereas Parkinson’s disease and traumatic brain injury, which activate stem cells directly, may result in a depletion of the stem cell pool, therapeutic deep brain stimulation of certain brain areas, Prozac, and exercise stimulate the downstream progeny of stem cells and increase production of new neurons while keeping the stem cell pool itself safe and intact. Enikolopov and his colleagues plan to use these findings and their mouse toolbox to find drugs that can spur neuronal growth without harming the adult stem cell cache.

This work was supported by grants from the National Institutes of Health, NARSAD, NYSTEM, the Ira Hazan Fund, and The Ellison Medical Foundation.

Did you hear the one about the swimming worm?