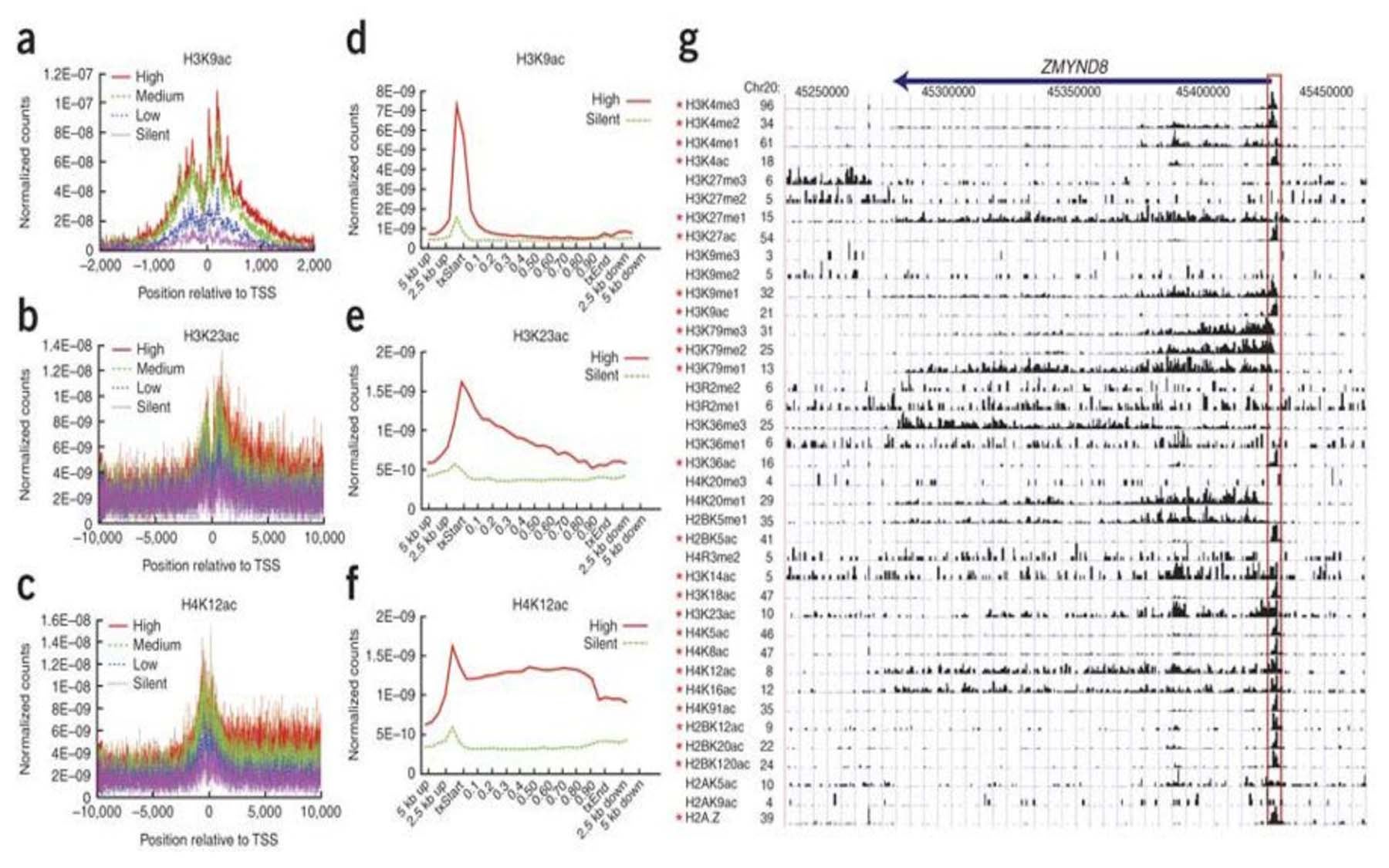 Cold Spring Harbor, NY — Although every cell of our bodies contains the same genetic instructions, specific genes typically act only in specific cells at particular times. Other genes are “silenced” in a variety of ways. One mode of gene silencing depends upon the way DNA, the genetic material, is packed in the nucleus of cells.

Using a new technology called ChIP-Seq, the team identified 39 histone modifications, including a “core set” of 17 modifications that tended to occur together and were associated with genes observed to be active.

Scientists have long known that chemical changes at particular locations in histone complexes influence how tightly the DNA is wrapped around the histones. “But it is important to know whether particular modifications occur together in characteristic patterns, or if these patterns can predict gene activities,” Dr. Zhang explained.

At the heart of the team’s efforts to determine this, Keji Zhao, Ph.D., of the National Heart, Blood, and Lung Institute of the National Institutes of Health, and his colleagues developed a method to map modifications in human white blood cells known as CD4+ T cells. First they used an enzyme to cut the DNA into short segments, which remained attached to histone “spools.” For each of 39 distinct histone modifications, the scientists used an antibody to extract matching histone-DNA combinations. Finally, they used the ChIP-Seq DNA-sequencing technology to determine which parts of the genome were bound to each type of modified histone.

The team’s most recent research, published in the July 2008 issue of Nature Genetics, maps the DNA locations that bind to histones containing molecular configurations called acetyl groups at 18 different positions in the “tails” of the histone proteins. The scientists combined this information with earlier maps for 19 different changes called methylation modifications, and for replacement of one of the histone proteins with a well-known variant.

Mapping many modifications enabled the researchers to explore whether different types tend to appear together in the same type of DNA regulatory regions. They found that some recurring combinations did occur frequently at “promoter” and “enhancer” regions in DNA, which are known to increase the activity of nearby genes. In particular, the team identified one combination of 17 modifications that were present in more than a quarter of the more than 12,000 promoter regions they examined.

On average, the genes corresponding to this “backbone” set were expressed more actively. That is to say, they were activated, setting the cellular machinery in motion to produce specific proteins, the workhorses of most life processes.

The rich relationships detected by the researchers among the various histone modifications suggests that specific combinations might carry specific meanings. Previous researchers have proposed a “histone code” hypothesis, which posits that a particular combination of modifications may be recognized by a particular protein module. Some scientists believe such histone code may determine the activity of a given gene.

But, cautions Dr. Zhang, while there are patterns, like the backbone, that are highly correlated, “none of them has exact predictive value.” He maintains “there must be something else” that also affects gene activity.

Since genes with higher or lower expression levels may have the same patterns of modification, and not all active genes share a common pattern, the reality is likely more complex than a universal histone code that predicts exact gene expression level. Nonetheless, the new research provides a rich data source for understanding how specific combinations of histone modifications modulate the effects of many genes, in turn helping to modify activity within and among cells. “Critical future research should focus on finding proteins that target histone modifications to genetic regions with particular sequences,” Dr. Zhang emphasized.