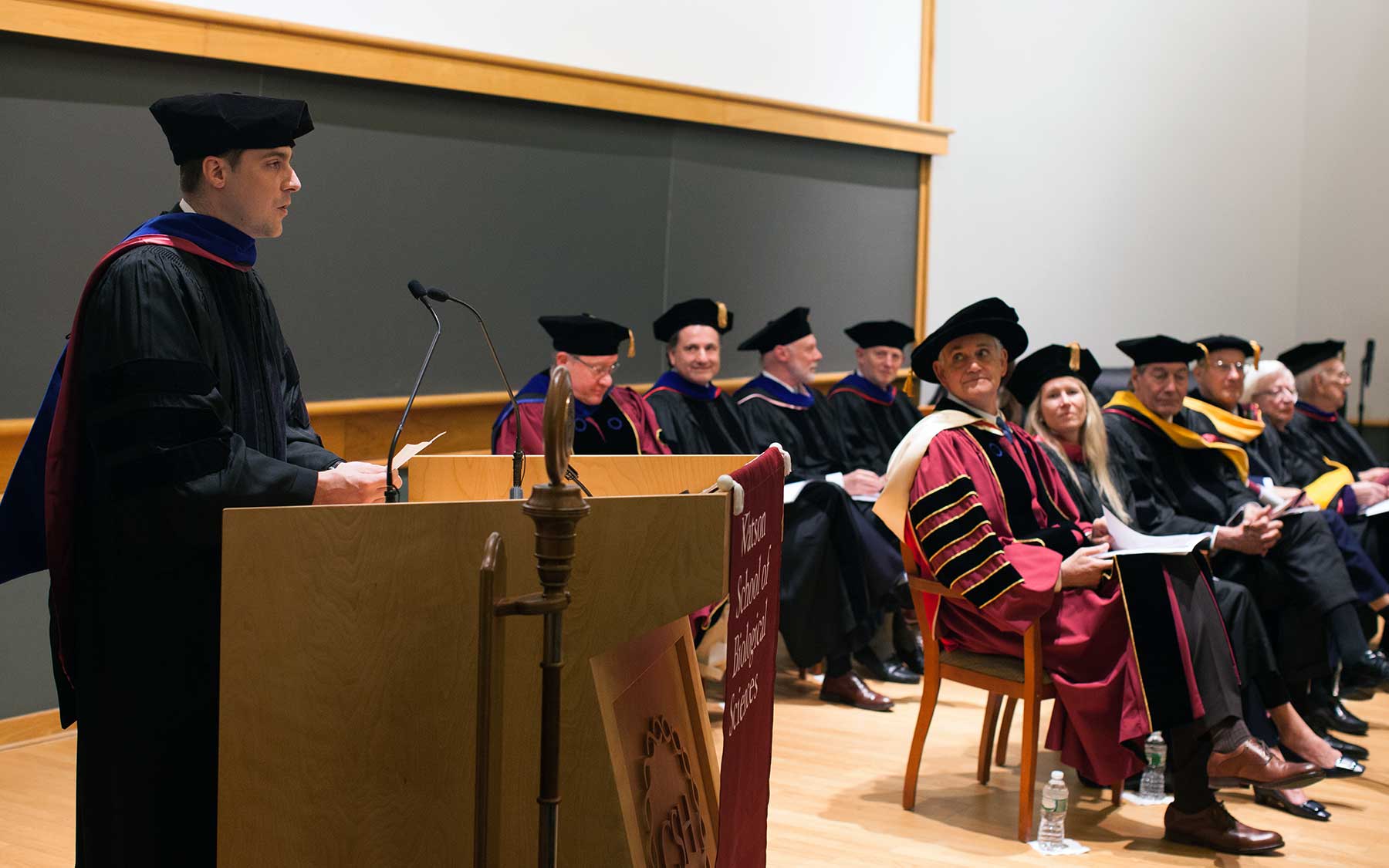 In this edition of LabDish, we feature the thought-provoking remarks of Dr. Jack Walleshauser, on the occasion of his graduation from the Watson School of Biological Sciences on April 19. That day, Jack shared his passion for science and his desire to see scientists communicate more readily with the public.

As a U.S. Army veteran on active duty from 2002-2006, with two years in Iraq during the Iraq war, and the father of three children with his wife of 10 years, Brandy, Jack offers unique perspective.

He came to CSHL from the University of North Carolina Greensboro, where he received a B.S. in Biology and Chemistry in 2010.  At CSHL, he was a member of Dr. Leemor Joshua-Tor’s lab, working on structural and biochemical studies of proteins that regulate microRNAs. The title of Jack’s thesis is: “Insights into the molecular interactions within the Lin28-let-7 pathway.”

“I’d like to thank Leemor Joshua-Tor, my research advisor, for giving me a great deal of freedom, but also guidance and support when I needed it. Thanks to Chris Faehnle, who worked closely with me on my research project.  Thanks to the rest of the Joshua-Tor lab, my thesis committee for their advice and encouragement, and my family and friends who are here today. Thanks to everyone at the Watson School, I am grateful for having been a part of this community.

“I thought I would share a few insights that I’ve acquired or refined since coming to Cold Spring Harbor.

“We are part of a new generation of scientists. I hope our generation does a better job at changing the interface between science and society. It is alarming that so many people in the U.S. do not accept the fact that living things evolve, or the fact that the earth is warming. Too many Americans doubt the usefulness of vaccines, don’t know what genetically modified foods are, or are confused about the age of the earth.

“Ignorance about science may be the reason our government spends 20 times more money on our military than on medical research (as a military veteran, I’ve seen firsthand how much of our tax money is wasted by the military).

“I was drawn into science by reading books. One of the most prolific science writers was Carl Sagan. He conveyed a sense of wonder about life and our place in the universe. And it was from him that I learned that all living processes are governed by chemistry and physics. Without this introduction to science in a way that was elegant yet easy to understand, I probably wouldn’t have been so motivated and inspired by science. We need more scientists to popularize our field, make it understandable to the general public and get people excited
about it.

“Sagan was deeply concerned about scientific literacy. (The last person to interview Carl Sagan before he died was Charlie Rose, who we are honored to have here with us today.) And in that interview Sagan said,

“He went on to say that science is not a collection of facts, but a way of thinking. This method is important, to provide us with skepticism of authority, prevent us from being taken advantage of, manipulated, or brainwashed. Science is a rational approach to the world- a candle in the dark we use to peek into the world around us.

“Just as Sagan did, we need to convey to people that scientists can be creative—that science is an art form in a way. Michaelangelo once said that ‘every block of stone has a statue inside and it is the task of the sculptor to discover it.’ Just as the statue is being freed from the stone, reality is out there and we, as scientists, are chipping away at it with a hammer and chisel to find the truth.”