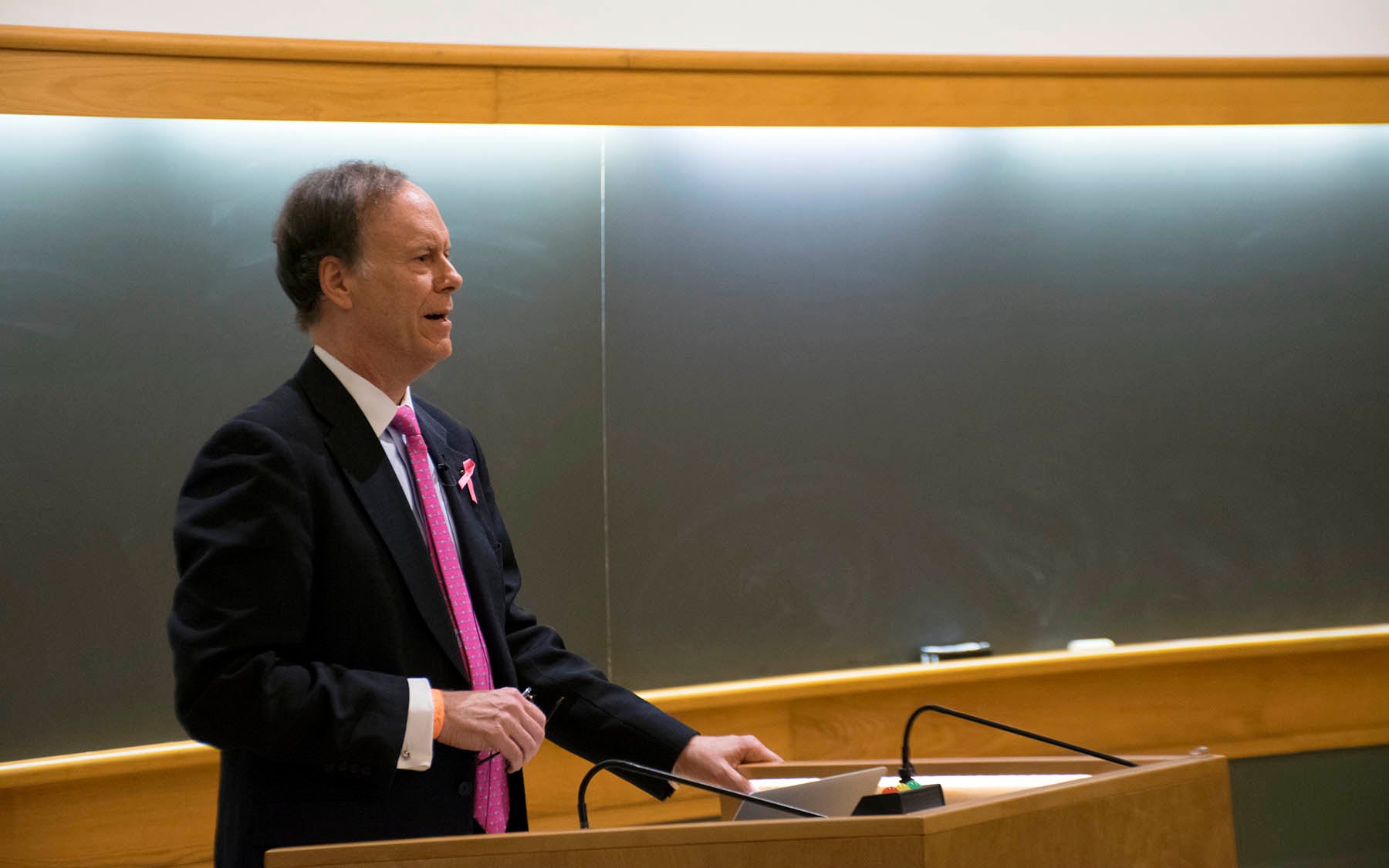 Kaelin, a Professor of Medicine at Harvard Medical School and Dana-Farber Cancer Institute, shared the prize with Sir Peter Ratcliffe and Gregg Semenza for their discoveries on how cells sense and adapt to oxygen availability.

“It’s always nice to be back at Cold Spring Harbor,” said Kaelin, who grew up around the area. “To me, Cold Spring Harbor has always been sort of sacred ground when it comes to the history of molecular biology and genetics. So I just think it’s this national gem.”

His research focuses on the inherited von Hippel-Lindau’s (VHL) disease. This genetic disease, which mutates the VHL gene, increases the risk of certain cancers in affected families.

Kaelin showed that the VHL gene encodes a protein that prevents the onset of cancer. Then, he later showed that VHL was involved in controlling the cell’s responses to hypoxia, or low oxygen levels. When the VHL gene is dysfunctional, cancer cells can cause the body to make extra blood vessels and red blood cells that help the cancer cells survive and proliferate.

“Some of the great German pathologists in the 19th century appreciated that all solid tumors have regions that are hypoxic and hypothesized that it would be a useful way to control tumor growth if we could block new blood vessels from supplying blood to them,” Kaelin said in a conversation with CSHL WSBS Professor Jan Witowski in 2016.

Kaelin also spoke about his history of working with undruggable targets and improving drug design. For example, he and his team have found small pockets that can be drugged in the otherwise undruggable molecule HIF. He has also combined multiple anticancer drugs in different concentrations to decrease a tumor’s resistance toward them.

“We’re trapped in a window right now where a lot of these wonderful drugs are getting used as single agents…but the key here is to make the math work,” Kaelin said.

That’s done by pairing up complementary drugs with toxicities that won’t “overlap in a prohibitive way.”

“His discoveries have significant implications for metabolism, for anemia, for cancer, for a number of other cellular processes,” he said. “Besides his pioneering work on cellular oxygen sensing, Bill has been a proponent of increasing the stringency and reproducibility of preclinical research. He has published papers where he describes research best practices to help other scientists think about experimental design. It’s been very influential for my work.”

This is the second lecture Kaelin has given since his Nobel Prize announcement. The first one was also standing room only, with the audience forming “selfie” lines at the end of it. “I can guarantee you I did not get smarter after I got that phone call,” he joked.

Kaelin recalled a time when he thought a phone call from the Nobel Foundation was “completely unlikely.” In his slides, he showed an undergraduate transcript in which he received a C– grade for his independent research. His professor wrote in the margins of the transcript: “Mr. Kaelin appears to be a bright young man whose future lies outside the laboratory.” He followed it with a photo of his rejection letter from Harvard Medical School.

Kaelin has written about how the papers leading to the various prizes he and his colleagues have received, including the Nobel, would be “considered quaint, preliminary and barely publishable today.” Shortly after the Nobel Prize announcement this year, a copy of the rejection letter from Nature for Sir Peter Ratcliffe’s related work was widely circulated on Twitter.

In the history of Nobel Prize winners, failure is not uncommon. CSHL alumni and Nobel laureate Carol Greider said in a Watson School commencement speech that on the same day she won the Nobel Prize the same work was rejected for a prestigious grant.

“Sometimes listing only the accomplishments blurs a much richer picture,” she said.