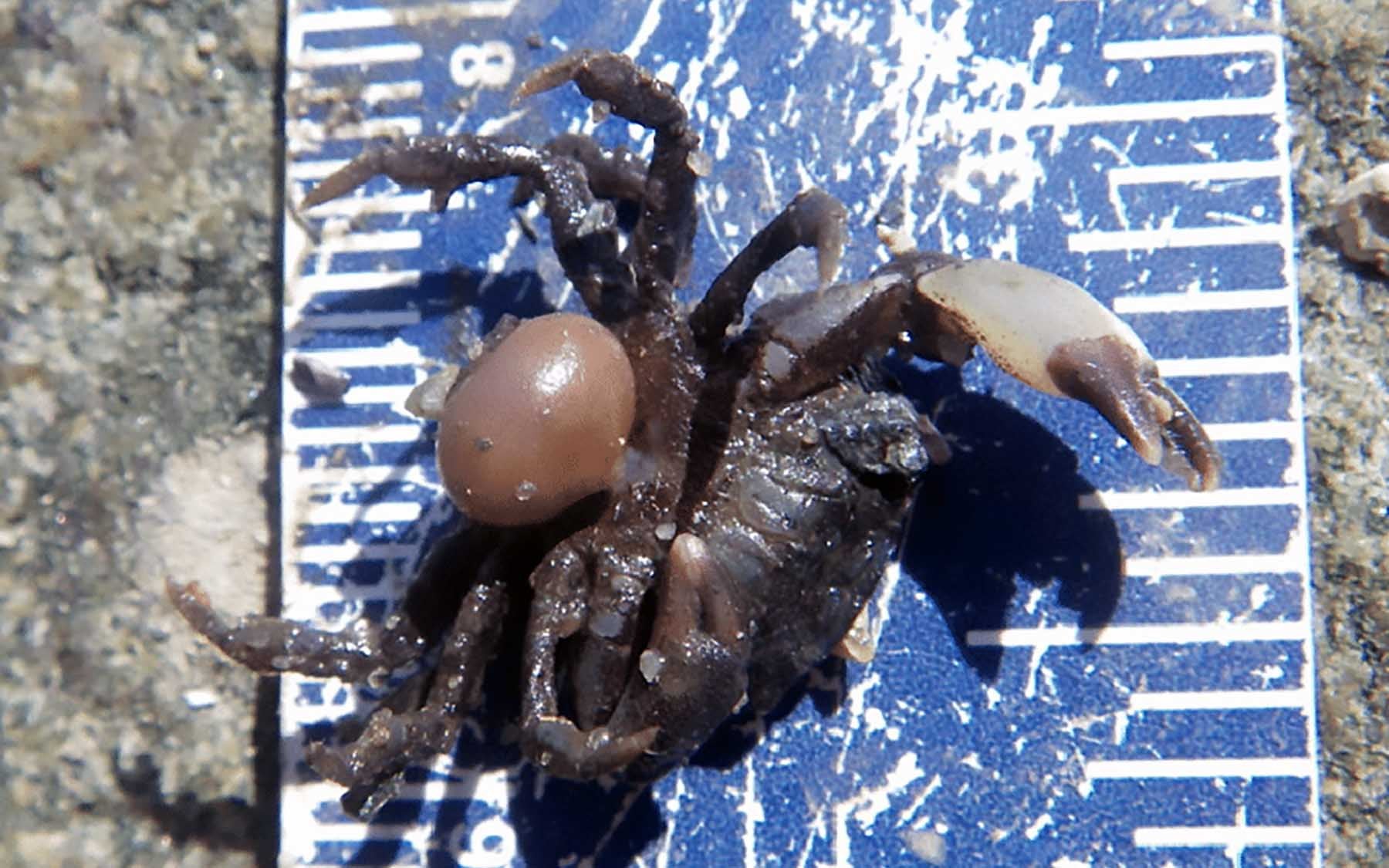 Strolling along the shore of Cold Spring Harbor Laboratory at low tide, you might notice red and blue “crab condos.” They are part of a field experiment by neighboring Long Island University (LIU) Post and Adelphi University researchers that will help understand how Long Island’s mud crab population is being impacted by two invaders—a body snatching parasite and a competitor species called the Asian shorecrab.

Environmental and marine studies are not part of the CSHL research portfolio, but the Lab is happy to donate our shore to this important work that is revealing the potential for cascading effects throughout our local ecosystem.

In this post we hear from one of the researchers, Dr. April MH Blakeslee, Assistant Professor at LIU-Post and a Research Assistant at the Smithsonian Environmental Research Center. Dr. Blakeslee studies invasive species in marine systems and host-parasite interactions, along with other areas of marine ecology and conservation biology.

Since the 2012 discovery by Adelphi University researcher Aaren Freeman of an invasive parasitic barnacle in Northwest Long Island, I have been part of a team of researchers working to understand the impact of this parasite on the coastal ecosystem. This ‘rhizocephalan’ parasite is called Loxothylacus panopaei and is native to the Gulf of Mexico but has invaded much of the Atlantic coast, including several recent populations in Long Island.

This parasitic barnacle is quite different from the typical free-living barnacle you might see attached to rocks or piers. Its larvae infects a mud crab host, taking over its body from within, including its “brain,” and altering its behavior by causing both male and female crabs to believe they are caring for their own eggs when they are in actuality caring for the barnacle’s. The parasite also castrates its host, making the infected crab a vessel for the barnacle’s reproduction instead of its own, thus providing the stationary barnacle with an effective means of spreading its larvae around using a mobile host.

As first reported in our 2013 paper “Northward expansion of the rhizocephalan Loxothylacus panopaei (Gissler, 1884) in the northwest Atlantic” and in subsequent work we have performed over the past three summers with the help of students, our research team has found several native mud crab populations along the north shore of Long Island harboring L. panopaei infections. We’ve seen that prevalence of parasitic infection in Cold Spring Harbor can reach as high as 64%. Such a high level of infection could be detrimental to established crab populations because rhizocephalan infection can reduce overall reproductive rates within a population, possibly lowering mud crab densities over time.

On top of this parasitic invasion, mud crabs are also competing for survival with an invasive Asian shorecrab (Hemigraspus sanguienus) that has been in this area since the early 1990s. Preliminary evidence suggests that where Asian shorecrabs are abundant, native mud crabs are not (and vice versa) and this might be the result of competitive interactions between the native and non-native species. My research team is trying to understand more about how the double threat of parasitic attack and competition from these invasive species is affecting our local mud crab populations. Mud crabs are important community members, serving as a food source for numerous fish, birds and invertebrates; therefore, losses in mud crab populations could have deleterious impacts on the local ecosystem. At LIU, we’ve found a strong impact of the two invaders on native mud crabs in laboratory experiments: infected mud crabs were preyed upon by Asian shore crabs at a much higher rate than those uninfected by the parasite.

We also wanted to see if this trend was apparent outside of laboratory settings and in the “field.” That’s how we came to the shoreline of Cold Spring Harbor Labs—a natural home of the mud crab. Our experiment at CSHL began in 2014 when we constructed fourteen “crab condos:” plastic milk crates filled with autoclaved oyster shell and covered with a mesh top. Developed and used at the Smithsonian Environmental Research Center for over a decade, these crab condos have been an effective tool for assessing mud crab abundance because, over time, mud crabs use these crates as shelters. This is similar in concept to an oyster bed. For the experiment, half of the crates contained a large Asian shorecrab and the other half (the control) had no Asian shorecrab. Our results from the summer of 2014 demonstrated significantly fewer mud crabs took up residence in the crates that contained the Asian shorecrabs. This suggested that the presence of the Asian shorecrab precluded mud crab recruitment to the condos. This year, we are repeating this experiment with 30 new crab condos in place along the shore of CSHL.

These experiments will help us understand the synergistic effect of two invaders, a rhizocephalan parasite and the Asian shorecrab, on native communities of Long Island. Our study suggests a strong impact of the two invaders on native mud crab abundance and survival, which could have cascading effects throughout the ecosystem. As these invasive species continue to spread into additional Long Island bays and estuaries, the need for continued research in the region is imperative. Thanks CSHL for your help!

For a special “Movember” edition of Cocktails and Chromosomes, Dr. Lloyd Trotman explained what his lab is doing to understand deadly prostate cancers.   Read more »