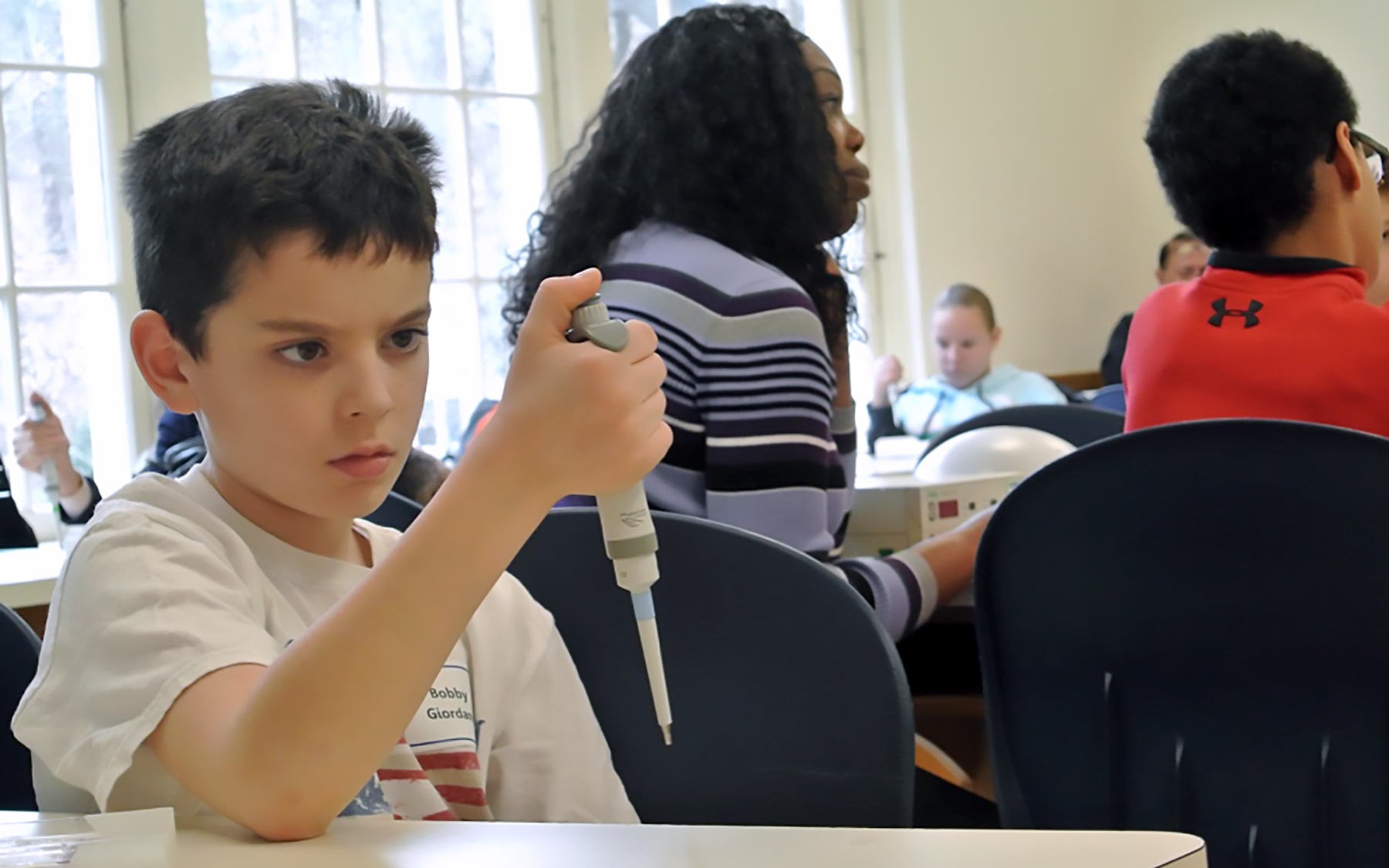 Bobby Giordano, 11, practices holding a pipette as part of a recent Saturday DNA! session at CSHL’s DNA Learning Center.
email envelop icontwitter icon share buttonfacebook icon share buttonlinkedin icon share button
Any savvy criminal in today’s world would try not to leave DNA evidence behind at the crime scene. But 5,000 years ago, criminals didn’t have to be so careful.

At a recent session of the DNA Learning Center’s Saturday DNA! program, students aged 10 to 13 used DNA evidence to try to identify the killer of Ötzi, an ancient ice mummy who appears to have been fatally shot with an arrow on a snowy mountain in the Alps 5,000 years ago. An exact replica of Ötzi stands in the museum at the DNA Learning Center, where 11-year-old Bobby Giordano has become a regular. The “Whodunit?” theme of that day’s session was particularly exciting, Bobby says, because crime-related DNA testing is “almost always on the news channel.”

As commonplace as DNA evidence is today, you don’t have to go back very far to get to a time when this wasn’t part of forensic investigations. It wasn’t available during Ötzi’s lifetime of course, but even as recently as 25 years ago, DNA evidence rarely made it into the courtroom. In 1992, attorneys Peter Neufeld and Barry Scheck founded The Innocence Project because they saw the potential for DNA testing to revolutionize forensic science—and importantly, exonerate the wrongly accused. They came up with the idea after participating in conversations at CSHL’s Banbury Center, where forensic experts from the FBI and elsewhere met with scientists studying DNA in an effort to improve investigations.

Bobby and the rest of the Saturday DNA! students used one of the same techniques that the Innocence Project worked to bring into the forensic arena in the 1990s. Known as gel electrophoresis, the approach allows investigators to visually compare samples of DNA based on how they move through a slab of a squishy substance called agar. It starts out as a liquid, which made even the prep work mesmerizing for Bobby, who watched intently as the agar solidified into a tool used to catch criminals and free the innocent.

The students used real DNA in their mock investigations, though they were not the precious ancient DNA samples left on and around Ötzi himself. They learned that their agar gels serve as molecular obstacle courses for the fragments of DNA in their samples, which the students loaded into wells in one end of the gel and attracted to the other end using electrical currents. If the DNA sample from a particular suspect made it to the same points in the agar obstacle course at the same time as the sample supposedly found on Ötzi, that would mean the samples are a match. It’s all based on the concept that slight differences in the molecular weight of each sample determines how rapidly it can migrate through the gel.

When it came time to examine their results, Bobby was thrilled to see that only one of the three suspects’ DNA aligned with the evidence. “I’m really glad that kids now have an opportunity to look at things like this because my mom was saying that she had no idea what any of this stuff was until—” he trailed off and looked over to his mom, who replied, “College.” At age 11, Bobby already had firsthand experience with some of the forensic DNA testing that he’s always hearing about on TV, and he was proud of it.