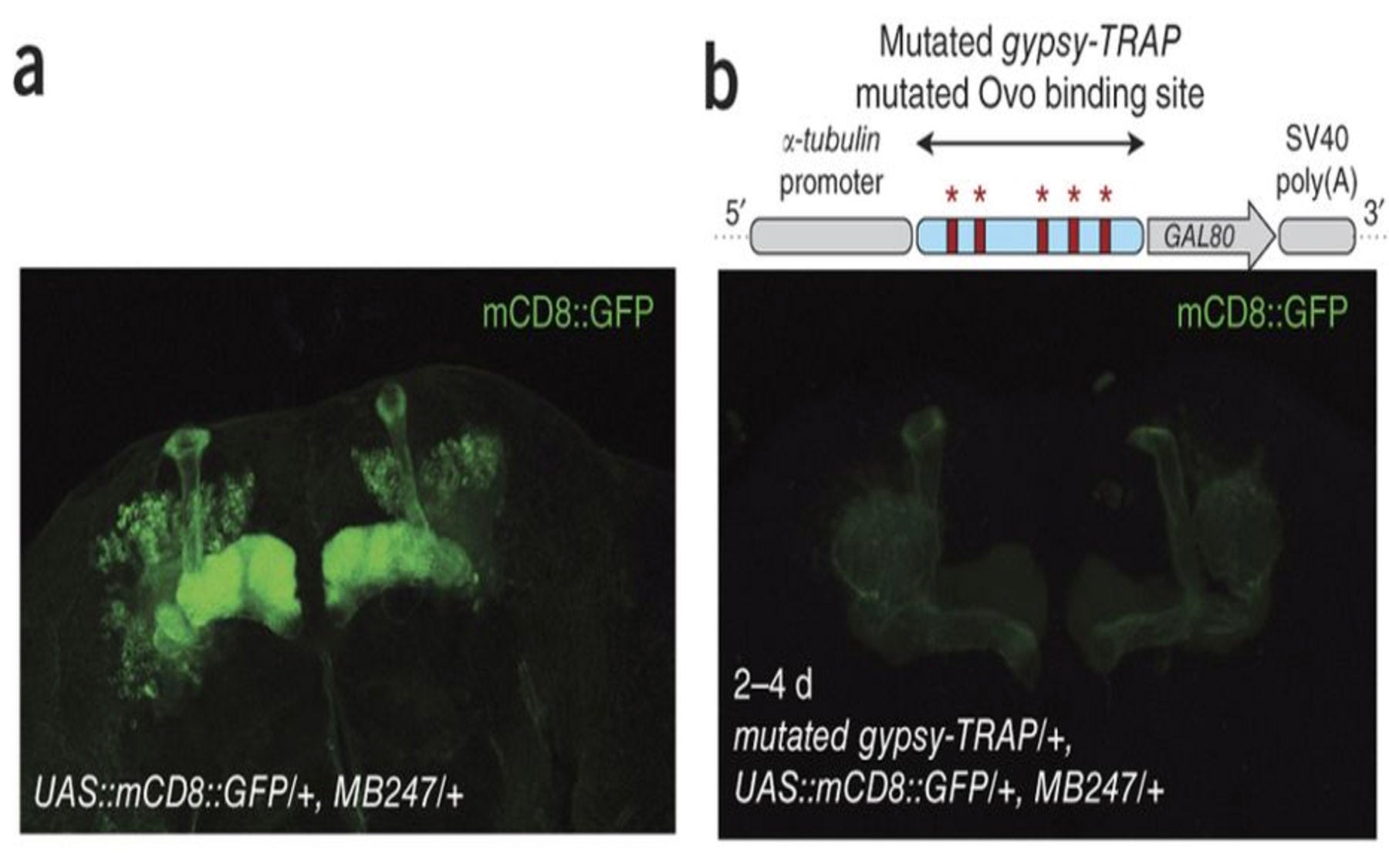 Transposon abundance and activity in the fruit fly brain increases with age and correlates with neurological degeneration.

Cold Spring Harbor, NY — As the body ages, the physical effects are notable; wrinkles in the skin appear, physical exertion becomes harder. But there are also less visible processes going on. Inside aging brains there is another phenomenon at work, which may contribute to age-related brain defects.

In a paper published in the journal Nature Neuroscience CSHL Associate Professor Joshua Dubnau and colleagues show that so-called “jumping genes,” or transposons, increase in abundance and activity in the brains of fruit flies as they age.

Originally discovered at CSHL by Professor Barbara McClintock while working on maize (corn) in the 1940s, transposons are typically repeat DNA sequences that insert themselves into the DNA of an animal or plant.

The moniker “jumping genes” comes from the fact that when activated they can reinsert themselves, or transpose, into another part of the genome. In the course of doing so they are thought to either provide variations in genetic function or, especially in the germline, induce potentially fatal disruptive defects.

Jumping genes in the brains of fruit flies

The median lifespan of a fruit fly can be measured in days. The average fly lives for somewhere between 40-50 days. But they provide a powerful model with which to get at the genetics of things like aging and brain function, including memory.

Dubnau’s interest was piqued by an experiment in which his team showed that when the activity of a protein called Ago2 (Argonaute 2) was perturbed, so was long-term memory—which was tested using a trained Pavolvian response to smell. “This is a neurodegenerative defect that gets profoundly more apparent with age of the flies,” notes Dubnau.

Since Ago2 is known to be involved in protecting against transposon activity in fruit flies, Dubnau and colleagues in his lab, including Wanhe Li and Lisa Prazak, were compelled to look for transposons.

Though transposons have been shown to be active during normal brain development, they are silenced soon afterward. The implication is that they have some functional role in development.

When Dubnau’s group looked for transposons they found that there is a marked increase in transposon levels in the brain cells, or neurons, by 21 days of age in normal fruit flies. The levels were observed to increase steadily with age. These transposons, including one in particular called gypsy, were highly active, jumping from place to place in the genome.

When they blocked Ago2 from being expressed in fruit flies, transposons accumulated at a much younger age. In fact the levels of transposons in young Ago2 “knock-out” flies were equivalent to those in much older normal flies, and increased further still as the Ago2 knock-out flies aged.

Accompanying this transposon accumulation were defects in long-term memory that mirrored those usually seen in much older flies, as well as a much-reduced lifespan. “Essentially the Ago2 knock out flies have no long-term memory by the time they are 20 days old, while normal flies have a normal long-term memory at the same age,” Dubnau reports.

In a previous paper the Dubnau lab, in collaboration with CSHL Assistant Professor Molly Hammell, established a connection between transposons and devastating neurodegenerative diseases such ALS (amyotrophic lateral sclerosis, or Lou Gehrig’s disease) and FTLD (frontotemporal lobar degeneration). The link was the protein TDP-43, which they showed controls transposon activity.

Taken together with the results in his team’s new paper, Dubnau proposes that a “transposon storm” may be responsible for age-related neurodegeneration as well as the pathology seen in some neurodegenerative disorders.

However, his studies so far don’t address whether transposons are the cause or an effect of aging-related brain defects. “The next step will be to activate transposons by genetically manipulating fruit flies and ask whether they are a direct cause of neurodegeneration,” Dubnau says.

The research described in this release was supported by the following grants and funding agencies: US National Institutes of Health grant TR01(5R01NS067690-03) and DART NeuroScience LLC awarded to J.D. S.G. received additional support from the Shakespeare Fellowship and the Ernst Göhner Foundation.

Scientists switch memory recall on and off in fruit flies

Researchers find a way to use genetics to shut off and turn on electric activity in insect brain.   Read more »