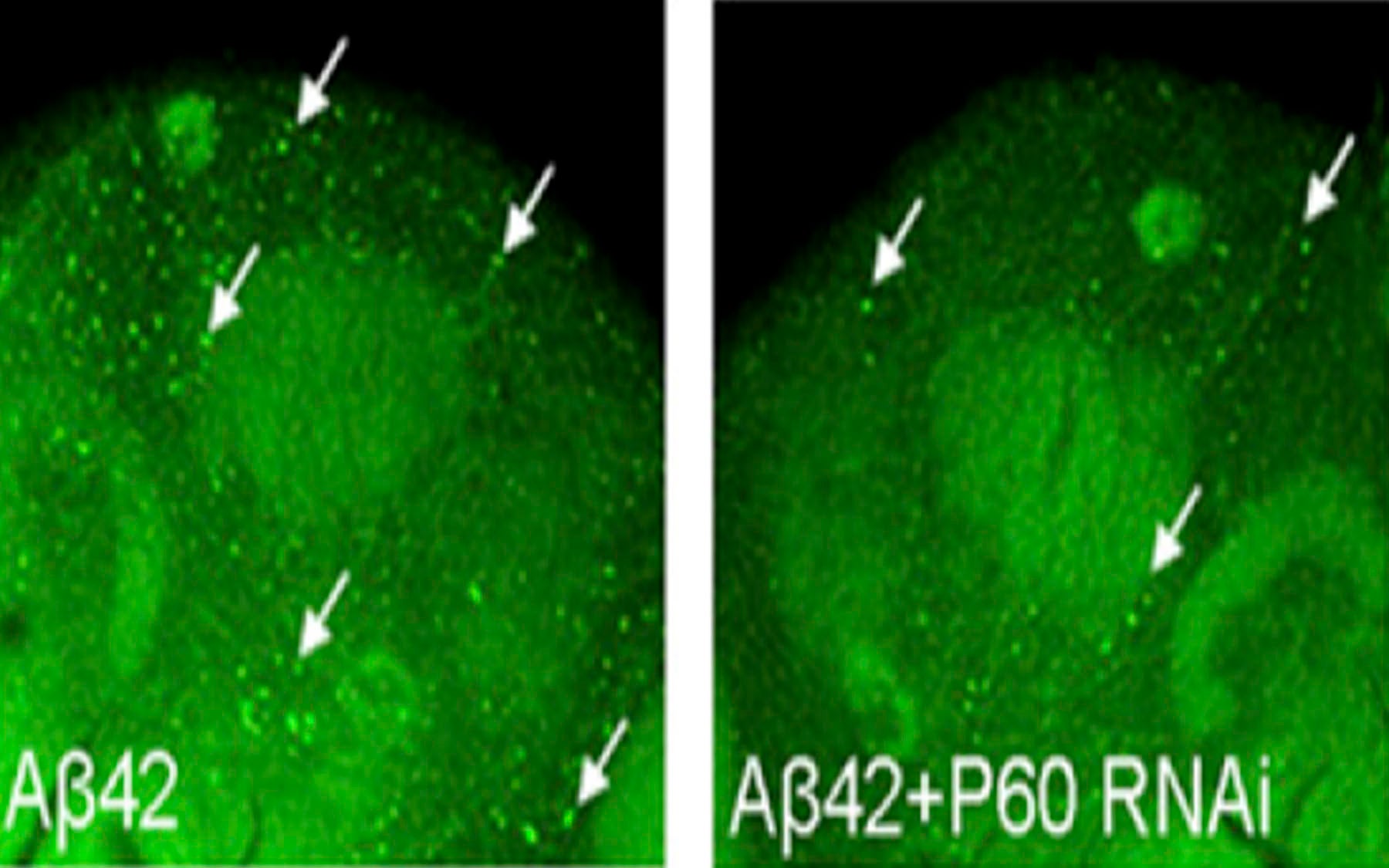 Cold Spring Harbor, NY — By blocking the cellular signaling activity of a protein, a team of neuroscientists at Cold Spring Harbor Laboratory (CSHL) has prevented memory loss in fruit flies caused by brain plaques similar to those thought to cause Alzheimer’s disease in humans. The study also resolves a long-standing controversy about the role of this protein, PI3 kinase, which was previously thought to have a protective function against the disease.

“Our work suggests that the peptides, or fragments, of b-amyloid associated with Alzheimer’s disease directly increase the activity of PI3 kinase, which in turn causes memory loss and increases the accumulation of plaque in the brain,” explains CSHL Professor Yi Zhong, who led the research team. The study appears online, ahead of print, March 29th in the Proceedings of the National Academy of Sciences.

B-amyloid peptides are known to alter a slew of cellular signaling proteins such as PI3 kinase, causing a wide range of cellular dysfunctions within the brain’s neurons, thus impairing brain activity. But exactly how these dangerous peptides cause signaling havoc and trigger memory loss has been a mystery, largely because such studies have been performed in cultured cells, not in living organisms.

Zhong and his colleagues addressed the question in a biological system that closely recapitulates the disease pathology seen in humans: fruit flies engineered to produce human b-amyloid in their brains. The team previously showed that these flies develop many key features of Alzheimer’s, including age-dependent memory loss, massive neurodegeneration, b-amyloid deposits and plaque accumulation.

Searching for the molecular basis of memory loss, the team discovered the importance of PI3-kinase by studying a type of neurotransmission called long-term depression (LTD), in which nerve signal transmissions at particular synapses, or junctions between nerve cells, is depressed for an extended period, usually lasting hours. LTD is known to be pathologically enhanced when b-amyloid is present in fly brain.

The team has now found that LTD enhancement in the b-amyloid-producing flies is due to increased activity of PI3-kinase. A reduction of this activity via injections of PI3 kinase-blocking chemicals or by switching off the gene that encodes PI3 kinase both restored normal LTD signals. With these measures, the team not only improved memory in aging fruit flies, but also decreased the buildup of b-amyloid deposits.

These findings on b-amyloid’s effect on PI3 kinase activity might explain another mystery about the disease. Among patients, the disease is sometimes known as “brain diabetes” because brain tissue gradually becomes resistant to insulin, further impairing brain function. Insulin is one of the molecules that normally induce PI3-kinase activity, which in turn mediates the cell’s response to insulin.

“Our results now suggest that the Alzheimer’s brains might become insulin-resistant because PI3 kinase activity is already at the maximum due to its activation by b-amyloid and therefore is no longer able to respond to insulin,” explains Zhong. “It might be possible to tackle these various disease symptoms by targeting PI3 kinase.”

This work was supported in part by grants from the National Institutes of Health and the U.S. Army Neurofibromatosis Research Program.

“PI3 kinase signaling is involved in Ab-induced memory loss in Drosophila” appears online on March 29th in Proceedings of the National Academy of Sciences. The full citation is: Hsueh-Cheng Chiang, Lei Wang, Zuolei Xie, Alice Yau, and Yi Zhong. The paper can be found at http://www.pnas.org/content/early/2010/03/17/0909314107.full.pdf+html.

Dive into the 3D atomic structure of the NMDA receptor, important in several brain disorders, and see how it interacts with drugs that inhibit it.   Read more »

LIVE At the Lab: NeuroAI: Learning from the brain and AI