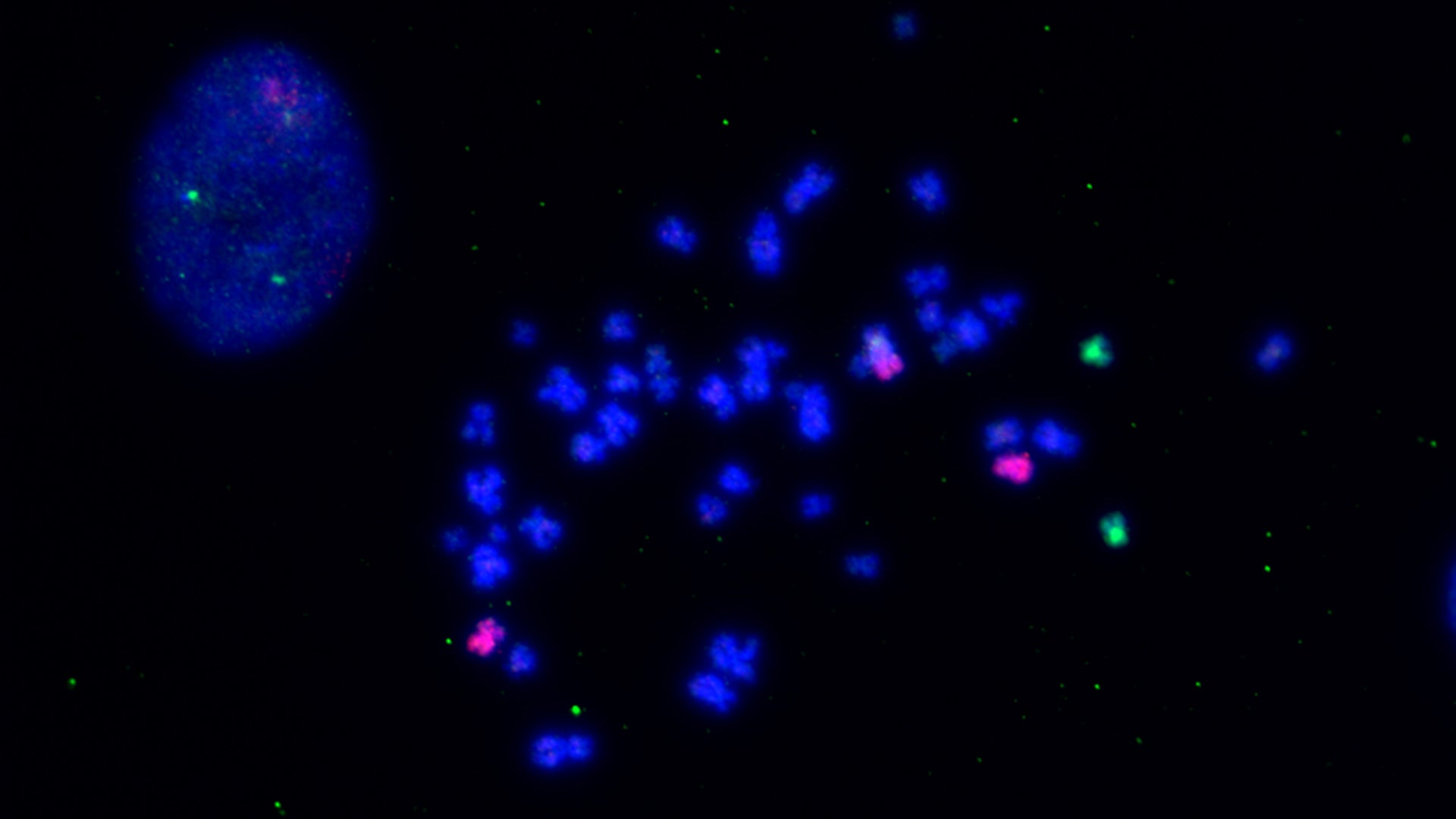 Having the wrong number of chromosomes normally impedes cell growth and yet is commonly found in tumors. CSHL researchers discovered that as cancer cells divide, they optimize the genes they need to survive cancer treatments by adding or subtracting the chromosomes that contain those genes.

Chromosomes, the genetic material of our cells, are normally copied and distributed equally between two dividing cells. The cell division process is carefully regulated; losing a chromosome can be fatal or crippling for a cell. But Cold Spring Harbor Laboratory (CSHL) Fellow Jason Sheltzer and his team discovered that cancer cells shed or double chromosomes during cell division to survive anti-tumor drugs. Their discovery may help researchers pinpoint the root of cancer recurrence and develop more effective treatments.

In this video, the chromosomes are stained green; they double and split between two new cells. Normally, cells have checkpoints that ensure chromosomes are organized and lined up correctly for equal distribution. But when the researchers disrupted those checkpoints, some chromosomes ended up on the wrong side. Sheltzer and his laboratory discovered that this unequal division of chromosomes helps some cancers become resistant to therapeutic drugs. Video: Lukow/Sheltzer lab

Cells with the wrong number of chromosomes (“aneuploidy”) grow more slowly than normal cells do. When the team grew cells in the presence of anti-tumor drugs, both normal and aneuploid cells grew poorly, but eventually the aneuploid cells started growing better than the normal ones did. Devon Lukow, a Stony Brook University graduate student-in-residence in the Sheltzer lab and first author of the study, says:

“During drug treatment, it kind of selects against most of these cells, but then there’s a few that might have an aneuploidy that helps confer resistance, and they’re just selected for, and they’re given the space to expand and form a resistant tumor.”

The researchers sequenced the aneuploid cells that grew well. What surprised them was that no matter how many times they grew new batches of aneuploid cells for a particular type of cancer—say melanoma—the resistant cells usually ended up with similar patterns of aneuploidy. Lukow says, “This is a way in which we can hope to identify genes that promote resistance, by seeing which are duplicated or lost.”

Colon cancer cells exhibited the same behavior, ending up with a unique pattern of chromosome alterations, but a different pattern than the one seen in melanoma. The next step will be to find the genes responsible for conferring drug resistance. Lukow is hopeful, saying, “​If we can identify drug-resistance genes, we can be confident that if we target them alongside the primary therapy, we might be able to avoid resistance altogether.”

Having the wrong number of chromosomes normally impedes cell growth and yet is commonly found in tumors. CSHL researchers discovered that as cancer cells divide, they optimize the genes they need to survive cancer treatments by adding or subtracting the chromosomes that contain those genes.

Ten experimental cancer drugs kill tumors in ways that are entirely different than how clinicians thought they did, revealing important insights.   Read more »