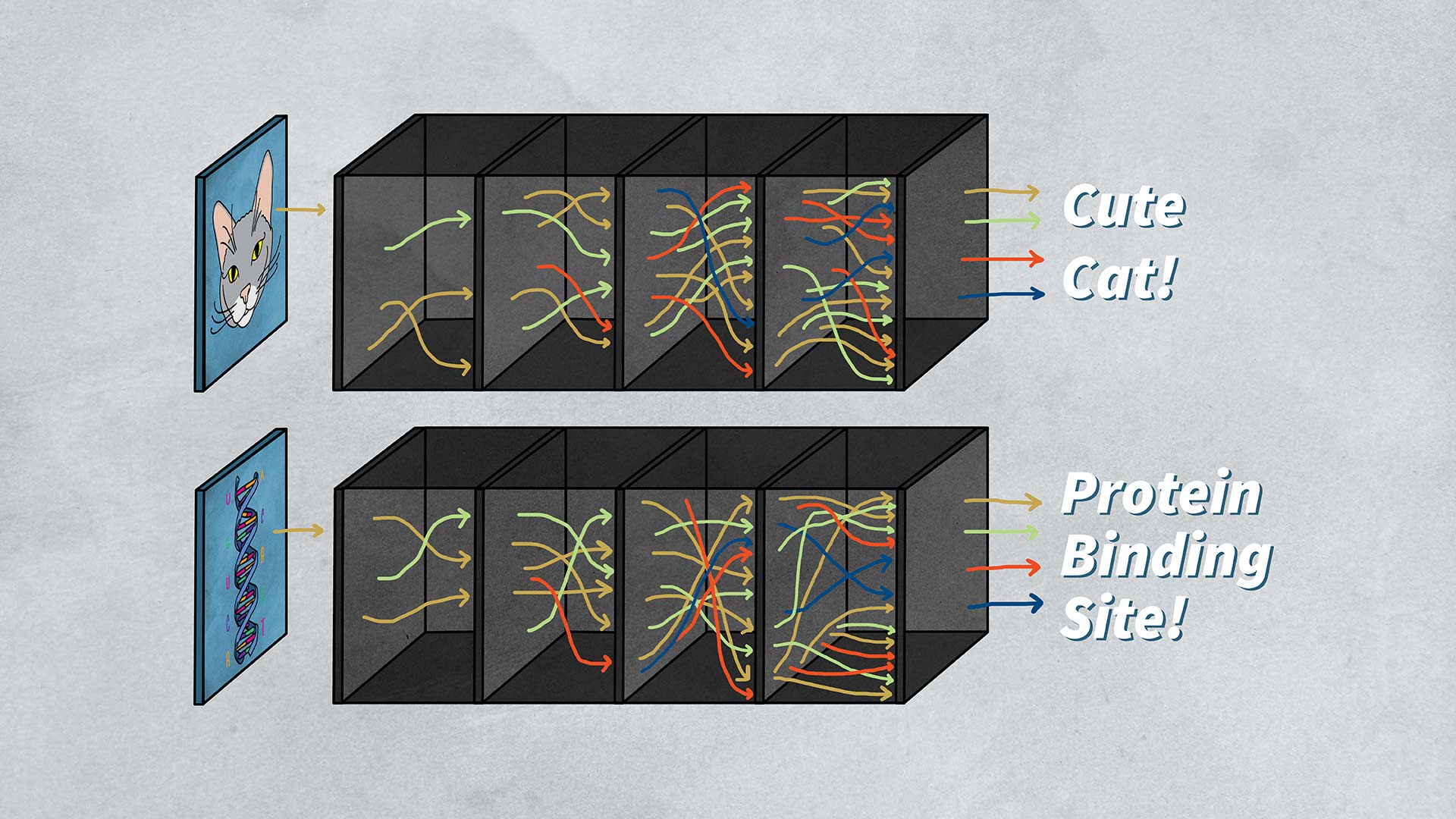 Researchers can train artificial brain-like neural networks to classify images, such as cat pictures. Using a series of manipulated images, the scientists can figure out what part of the image—say the whiskers—is used to identify it as a cat. However, when the same technology is applied to DNA, researchers are not certain what parts of the sequence are important to the neural net. This unknown decision process is known as a “black box”. Illustration: Ben Wigler
email envelop icontwitter icon share buttonfacebook icon share buttonlinkedin icon share button

Brain-like artificial networks are often referred to as a “black box” because researchers do not know how they learn and make predictions. Researchers at CSHL reported a way to peek inside the box and identify key features on which the computer relies, particularly when trying to identify complex DNA sequences.

Machine-learning researchers can train a brain-like “neural net” computer to recognize objects, such as cats or airplanes, by showing it many images of each. Testing the success of training requires showing the machine a new picture of a cat or an airplane and seeing if it classifies it correctly. But, when researchers apply this technology to analyzing DNA patterns, they have a problem. Humans can’t recognize the patterns, so they may not be able to tell if the computer identifies the right thing. Neural nets learn and make decisions independently of their human programmers. Researchers refer to this hidden process as a “black box.” It is hard to trust the machine’s outputs if we don’t know what is happening in the box.

“It can be quite easy to interpret these neural networks because they’ll just point to, let’s say, whiskers of a cat. And so that’s why it’s a cat versus an airplane. In genomics, it’s not so straightforward because genomic sequences aren’t in a form where humans really understand any of the patterns that these neural networks point to.”

Koo’s research, reported in the journal Nature Machine Intelligence, introduced a new method to teach important DNA patterns to one layer of his CNN. This allowed his neural network to build on the data to identify more complex patterns. Koo’s discovery makes it possible to peek inside the black box and identify some key features that lead to the computer’s decision-making process.

But Koo has a larger purpose in mind for the field of artificial intelligence. There are two ways to improve a neural net: interpretability and robustness. Interpretability refers to the ability of humans to decipher why machines give a certain prediction. The ability to produce an answer even with mistakes in the data is called robustness. Usually, researchers focus on one or the other. Koo says:

“What my research is trying to do is bridge these two together because I don’t think they’re separate entities. I think that we get better interpretability if our models are more robust.”

Koo hopes that if a machine can find robust and interpretable DNA patterns related to gene regulation, it will help geneticists understand how mutations affect cancer and other diseases.

Brain-like artificial networks are often referred to as a “black box” because researchers do not know how they learn and make predictions. Researchers at CSHL reported a way to peek inside the box and identify key features on which the computer relies, particularly when trying to identify complex DNA sequences. 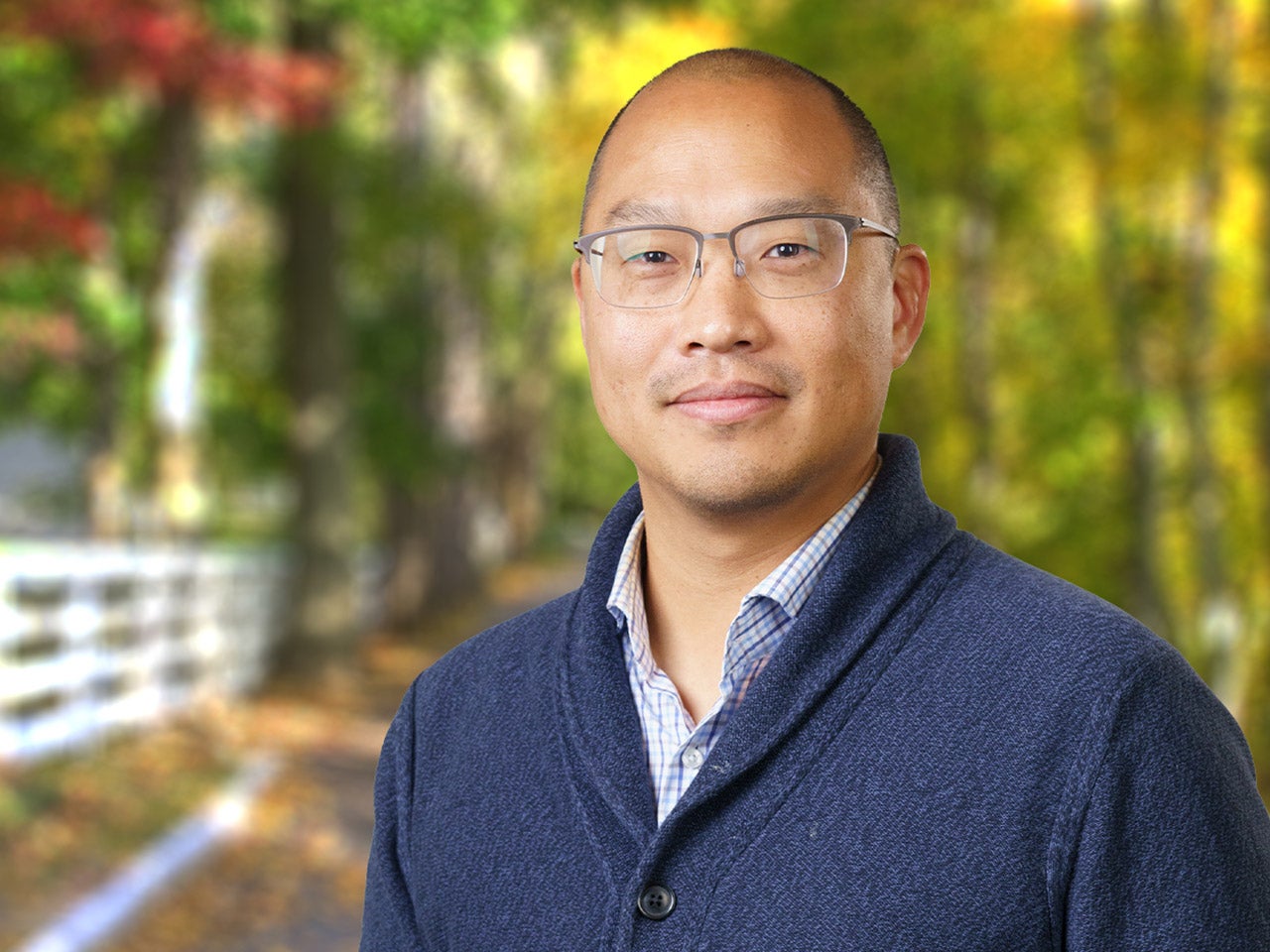 AI machines are often better than humans at discerning patterns. CSHL researchers developed a way to find out why.   Read more »

Finding the right AI for you

AI’s popularity has reached a point where there are too many options. How do you know which AI is right for you? CSHL scientists have a solution.   Read more »