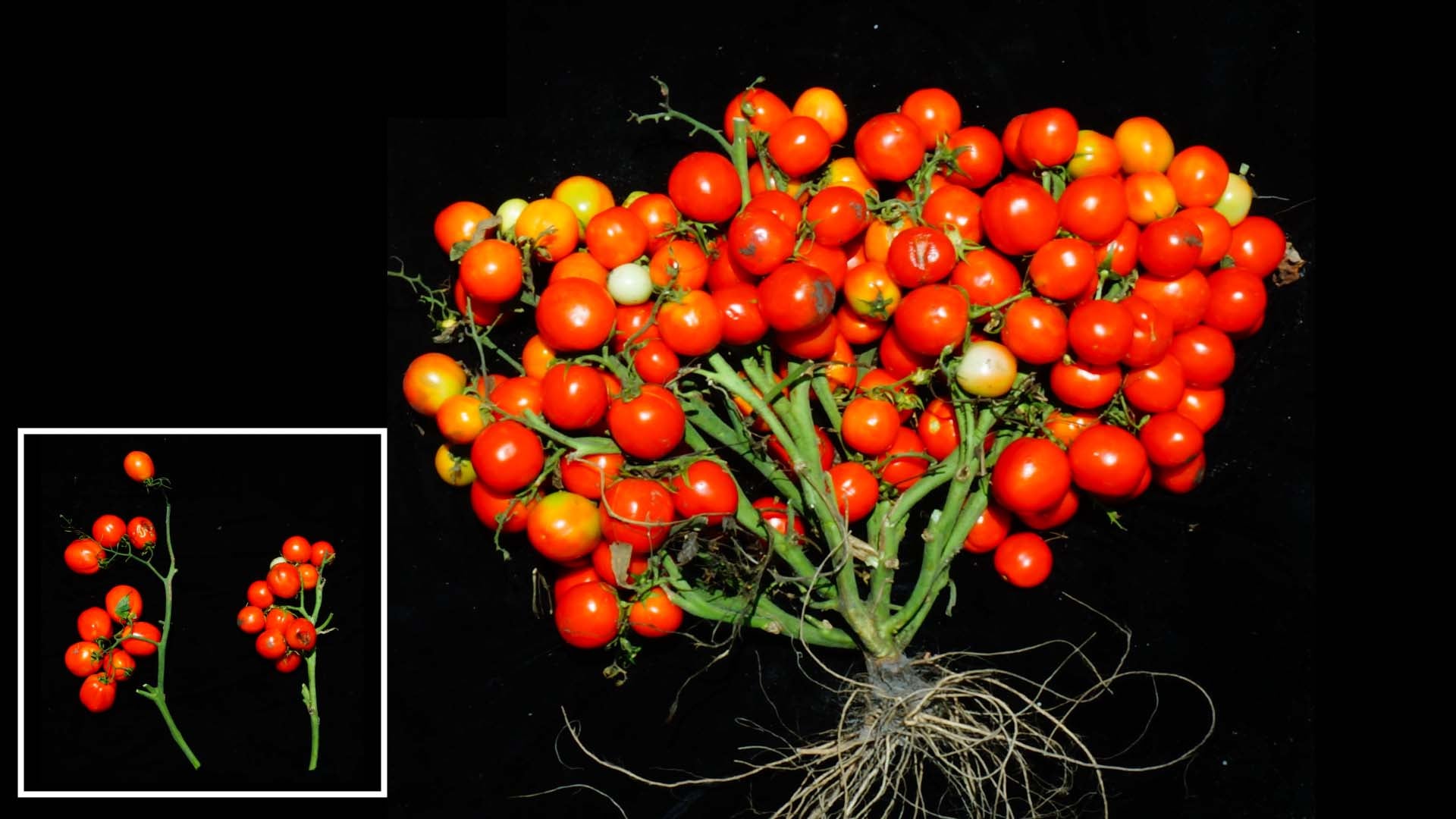 Farmers could soon be growing tomatoes bunched like grapes in a storage unit, on the roof of a skyscraper, or even in space. That’s if a clutch of new gene-edited crops prove as fruitful as the first batch.

The primary goal of this new research is to engineer a wider variety of crops that can be grown in urban environments or other places not suitable for plant growth, said Cold Spring Harbor Laboratory Professor and HHMI Investigator Zach Lippman, who leads the lab that designed the ‘urban agriculture tomatoes.’

These new gene-edited tomato plants look nothing like the long vines you might find growing in a backyard garden or in agricultural fields. The most notable feature is their bunched, compact fruit. They resemble a bouquet whose roses have been replaced by ripe cherry tomatoes. They also mature quickly, producing ripe fruit that’s ready for harvest in under 40 days. And you can eat them.

“They have a great small shape and size, they taste good, but of course that all depends on personal preference,” Lippman said.

“This demonstrates how we can produce crops in new ways, without having to tear up the land as much or add excessive fertilizer that runs off into rivers and streams,” Lippman said. “Here’s a complementary approach to help feed people, locally and with a reduced carbon footprint.”

That’s good news for anyone concerned about climate change. Earlier this year, the UN Intergovernmental Panel on Climate Change (IPCC) warned that more than 500 million people are living on land already degraded by deforestation, changing weather patterns, and overuse of viable cropland. By shifting some of the burden of growing the world’s crops to urban and other areas, there’s hope that desperate land mismanagement will slow.

Urban agricultural systems often call for compact plants that can be slotted or stacked into tight spaces, such as in tiered farming in warehouses or in converted storage containers. To make up for crop yield constrained by limited space, urban farms can operate year-round in climate-controlled conditions. That’s why it’s beneficial to use plants that can be grown and harvested quickly. More harvests per year results in more food, even if the space used is very small.

Lippman and his colleagues created the new tomatoes by fine-tuning two genes that control the switch to reproductive growth and plant size, the SELF PRUNING (SP) and SP5G genes, which caused the plant to stop growing sooner and flower and fruit earlier. But Lippman’s lab knew it could only modify the SP sister genes only so much before trading flavor or yield for even smaller plants.

Searching for a third player, Lippman’s team recently discovered the gene SIER, which controls the lengths of stems. Mutating SIER with the CRISPR gene-editing tool and combining it with the mutations in the other two flowering genes created shorter stems and extremely compact plants.

Lippman is refining this technique, published in the latest issues of Nature Biotechnology, and hopes others will be inspired to try it on other fruit crops like kiwi. By making crops and harvests shorter, Lippman believes that agriculture can reach new heights.

“I can tell you that NASA scientists have expressed some interest in our new tomatoes,” he said.

While the first ship to Mars probably won’t have its own farm, astronauts may still get to test their green thumbs with urbanized, space-faring tomatoes.

This research was supported by the Howard Hughes Medical Institute, the Rural Development Administration, the National Research Foundation of Korea, the USDA National Institute of Food and Agriculture, and the National Science Foundation.