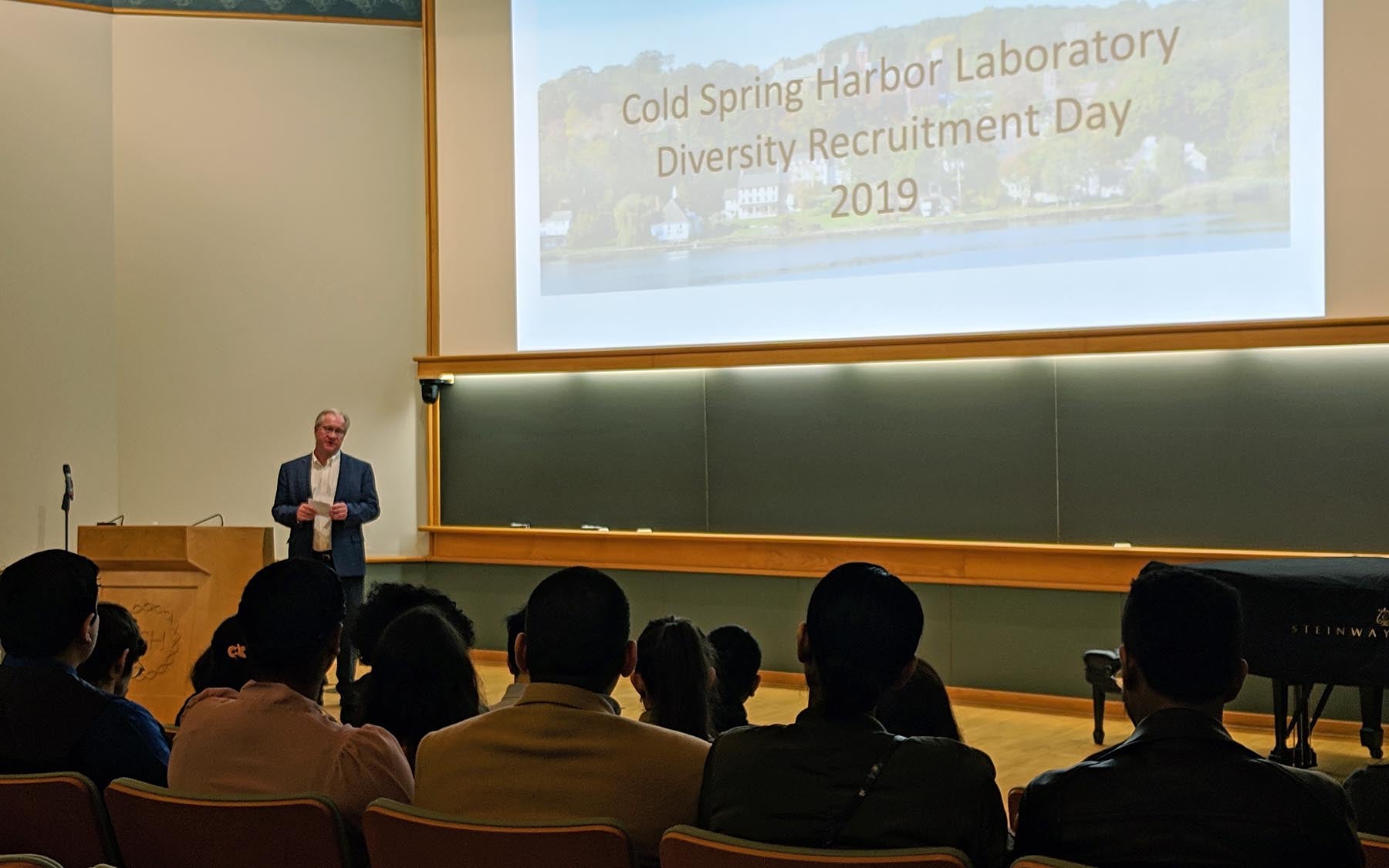 On a rainy Saturday morning in April, over fifty undergraduate students from New York City, Long Island and New Jersey colleges filed into Grace Auditorium. They bristled with anticipation, as do many visitors upon arriving at Cold Spring Harbor Laboratory (CSHL). Some of these students may have even pondered the same question I had two years prior when I pulled down Bungtown Road the first time: here resides a legacy of molecular biology, of Max Delbrück, Al Hershey, and Barbara McClintock—what could possibly happen today?

That April morning, the visitors had come to Diversity Recruitment Day, an event to introduce underrepresented students in science to the educational and research programs at the Laboratory. It was also an occasion for CSHL to share its long-standing inclusive and egalitarian attitude toward science with aspiring scientists. As Associate Dean Monn Monn Myat welcomed the students, I glanced over the schedule. Straightaway I realized this would not be a light bite of CSHL life.

In just seven hours, the visitors would tour the campus, eat lunch with current trainees, attend poster presentations by graduate students and postdocs, and listen to talks from faculty members and student-led organizations, including Women in Science and Engineering (WiSE) and the Diversity Initiative for the Advancement of STEM (DIAS).

The visiting students, many of whom in preparation for upcoming summer internships and graduate school applications, arrived hungry with questions. Before splitting off to tour campus, they asked about topics ranging from the CSHL Courses program to graduate school admissions criteria, feeling out the answer to: Is this the right kind of research environment for me? A collective sigh of relief filled the auditorium after Dean Alex Gann disclosed the lack of a GRE requirement for the graduate school—unheard of among American Ph.D. programs.

During the scientific poster session, detailed, one-on-one discussions blossomed between CSHL trainees and visitors. Standing beside my own poster, I rattled off the role of hormones in brain development. One student, in particular, apologized to me for asking “too many questions.” I told him: “There’s no such thing here.”

By lunch, the clouds had parted, giving way to a warm spring day. The visitors walked past the statue of giant, glinting ribosomes, paused, briefly, for photographs, then continued on to lunch and a panel on “Life at CSHL.” At my table, I spoke with some students from the City University of New York, whose interests spanned the vast landscape of biology. Naturally, they felt drawn to the breadth of research at CSHL, a place where plants, brains, and cancer somehow coexist through mutual symbiosis.

The panel of three graduate students and one postdoc spoke about the academic paths that led them to CSHL, representing the journeys of different underrepresented groups in science.

“You never know where you’ll end up here,” said David Johnson, a third-year graduate student. He spoke of the uncertainty he faced entering research with little prior exposure. Several of the panelists had benefited from the Exceptional Research Opportunities Program (EXROP), a highly competitive internship placement program supporting underrepresented college students. Together, their stories converged upon a similar theme: that there is no clear path into science, no recipe book or manual. For most, rather, it is a matter of chasing rare chances in an attempt to satisfy a curiosity. And for some, those chances are rarer than for others.

The day ended where it began, in Grace Auditorium, with closing remarks from Monn. Email addresses were exchanged, and, as usual, participation in a feedback survey was advised. While the audience sat and consolidated the many things they had learned, I could not help but think something important had happened that day, albeit subtle at the time. After all, this was the first Diversity Recruitment Day at CSHL or as described by David: “One of the best events in a long time targeting diversity at Cold Spring Harbor Laboratory.”