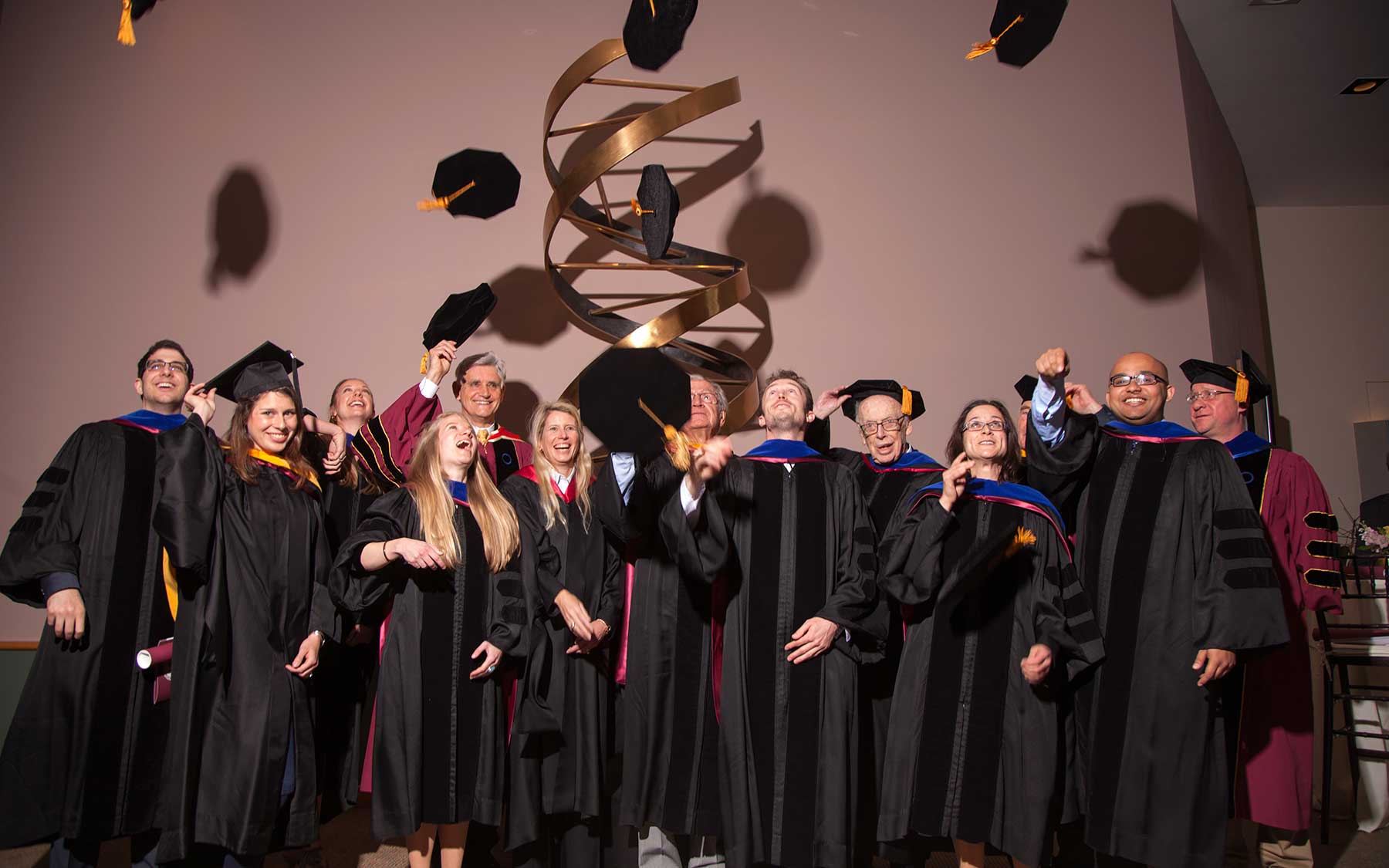 May Day, the First of May celebrates flowers, the arrival of spring and the coming of summer. Traditionally it involves dancing, singing, and food. May Day customs in some countries include rites to protect people from snakes and lizards, and rites to protect oxen from work. The Watson School of Biological Sciences’ Commencement Convocation, also the First of May this year, celebrates the accomplishments of our graduates and honorary degree recipients. Although the commencement ceremony has excluded dancing (thus far) and includes relatively little singing, there is food. We’ve been told that the shrimp cocktail is especially tasty.

This year, the Watson School is awarding seven Ph.D. degrees, to students who studied topics ranging from single-cell sequence data analysis to acute myeloid leukemia and amyotrophic lateral sclerosis. The School is also awarding two M.S. degrees. This year’s honorees bring our alumni to 90 Doctorates and 14 Masters degree recipients, all of whom are making exciting progress in their careers. At the moment, of our Ph.D. alumni, 41% are postdocs, 23% have faculty positions, 20% work in biotech or industry, and the remainder work in non-research scientific careers. In this year’s graduating class, most graduates have, or will soon have, taken up careers in biotech companies. This is a noticeable shift from the traditional career path that most of our graduates have followed, that of a postdoctoral research position in an academic lab. Last year, almost 60% of graduates continued as postdocs. This year, it’s closer to 20%. Is doing a postdoc becoming less appealing?

There is endless discussion about the dismal prospects for Ph.D.s who wish to become professors at major research institutions, leading their own labs, training their own students, and directing their own research programs. But the reality feels somewhat different at the Watson School. More than half of our graduates who earned their degrees six or more years ago are in faculty positions. And they’re doing quite well at it. And historically, becoming a Principle Investigator (PI) in an academic setting has been an unquestioned path for Ph.D. students in the biomedical sciences: get a degree, become a postdoc, become a PI. No variations and no exceptions. But the job of a PI is not ideal and certainly not for everyone. Relatively low pay and high demands on one’s time in exchange for the freedom to work on the questions one wants. With meager NIH budgets, this intellectual freedom becomes subject to priority areas, translational applications, and other restrictions that, in the end, challenge the premise that, in academia, one can pursue whatever questions one wants.

The scope of technology and industry jobs that make use of a biomedical Ph.D. student’s skills is changing, too. The ability to analyze massive amounts of data—whether DNA sequences or neural activity patterns—makes Ph.D. students appealing to data-driven companies like Google. The rapid technological advances in DNA sequencing have also inspired a number of companies that build computational tools for researchers to make sense of all this sequence data. Three recent WSBS graduates work for such companies, including one of this year’s graduates, Robert Aboukhalil. Robert works at Fluidigm, which develops tools to analyze single-cell sequence data, an extension of Robert’s thesis research in the Atwal and Wigler labs at CSHL.

And thanks to the workplace culture inspired by Silicon Valley tech companies, many biotech start-ups embrace a creative, exploratory philosophy that had previously been the rite of academia. One of this year’s graduates, Anja Hohmann, recently joined the research team at KSQ Therapeutics. KSQ is a small, Boston-based company of about 40 scientists that exploits the genome editing technique CRISPR to develop new therapeutic approaches to treat cancers. Anja works at the bench, but she was attracted to the company because its small size and lack of hierarchy enables her to learn about many other company roles.

Many graduates want to see that what they do every day has a positive effect on human health and society. The distance from basic, academic research to a product is too long for some. Two 2016 graduates, Tyler Garvin and Lisa Krug, are also planning on pursuing careers in biotech start-ups, in part because of an interest in seeing the usefulness of their work. Tyler has an engineering background that has always led him to focus the applications of his research. In his thesis, Tyler developed a single-cell sequence analysis platform now being used by researchers everywhere. And Lisa has a strong personal motivation to improve the scope of therapeutic strategies for patients, specifically for diseases of the brain, extending her thesis work in which she discovered a potential new clinical approach to treat neurodegenerative disease. One of our 2016 M.S. graduates, Devinn Lambert, had similar motivations for taking a position with the US Department of Energy, working in the bioenergy division. Devinn is interested in synthetic biology and how algae and land plants can be engineered to produce economically important fuels—for the benefit of society and the environment.

In this graduating class of scientists focused on applying their science to health and society, it is perhaps fitting that the Watson School will be awarding honorary degrees to two individuals who have, among numerous other contributions, spoken out about the importance of biomedical research to health and society. John Tooze and former senator Tom Harkin have both influenced government policies on research, supporting recombinant DNA technology and stem cell research, respectively.

We congratulate the Watson School’s graduating class of 2016 and look forward to seeing how they change the world.